MARVEL COLLECTORS' ITEM CLASSICS #1 was precisely what it claimed to be on the cover.  Talk about living up to its name?  Reprinting FANTASTIC FOUR #2, AMAZING SPIDER-MAN #3, ANT-MAN from TALES To ASTONISH #36 and TALES Of ASGARD from JOURNEY Into MYSTERY #97 - what more could anyone want in a comic? 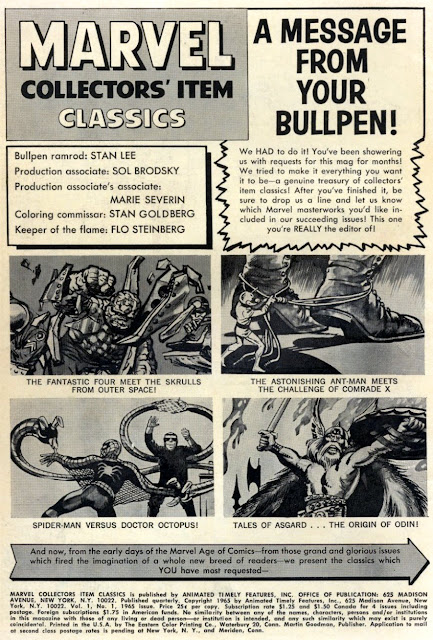 I recall buying this mag back around 1967 or '68.  I hadn't read any of the stories before (must've missed the FF tale when it was reprinted in WHAM!, and the Spidey story in POW!) so it was all new to me.  I was intrigued by the fact that the group didn't wear costumes, and one Spider-Man panel seemed to possess a distinct 3D quality to it.  (As it certainly did when it was included as part of a VIEWMASTER set in the '70s.) 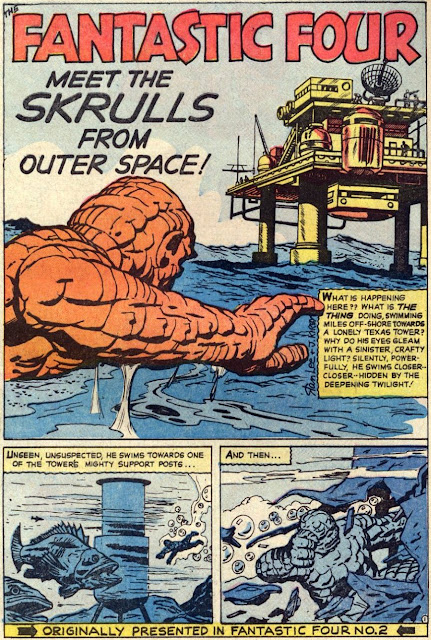 I managed to get my hands on quite a few issues of MCIC after that - and I still remember each and every one of them.  I've since re-acquired most of the first 30-odd issues (the title changed to MARVEL'S GREATEST COMICS with #23), and I often derive great pleasure from poring over them and reliving the time I first obtained these classic comics so many years ago. 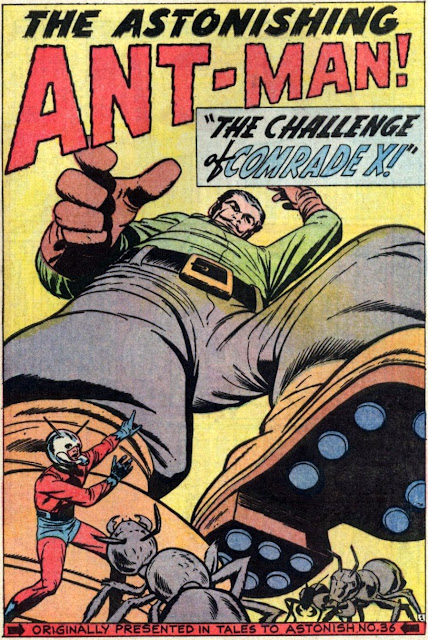 Interestingly, when MARVEL first issued their reprint collection mags (like MARVEL TALES, etc.), the original printing of each story was unobtrusively listed along the bottom of the splash page.  It wasn't too long, however, before this information was placed in a larger 'arrow-blurb' which obscured part of the artwork.  Because of this, they sometimes had to shrink and chop the page around to avoid covering too much of it.  Why not just print the info smaller then, as they had done originally? Perhaps they were obliged by law (or motivated by conscience) to make it clear that the mag contained no new material, although I would've thought the title fulfilled that requirement more than adequately. 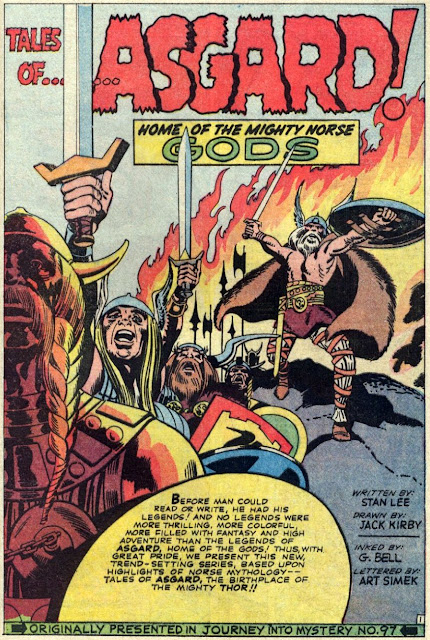 Regardless, Marvel Collectors' Item Classics was a superb comic mag, so - for those who weren't around at the time, or who simply want to refresh their memory - here's a super-quick taste of the first issue. 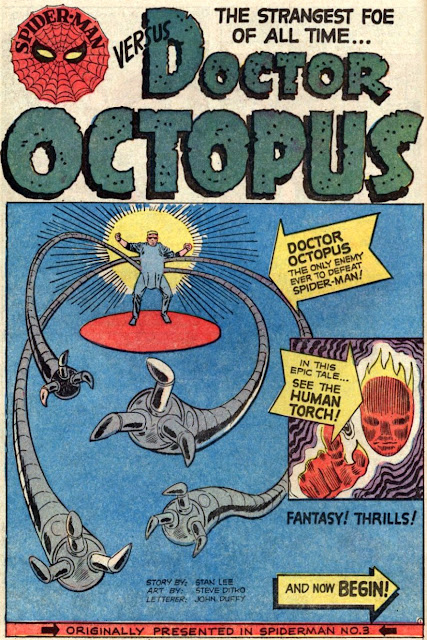 And, in case you were wondering, below is the picture which struck me as having an almost 3D quality about it when I first saw it around 45 years ago.  I now cringe in abject shame at the memory of cutting out the Spidey figure from my original copy. Bleedin' little vandal. 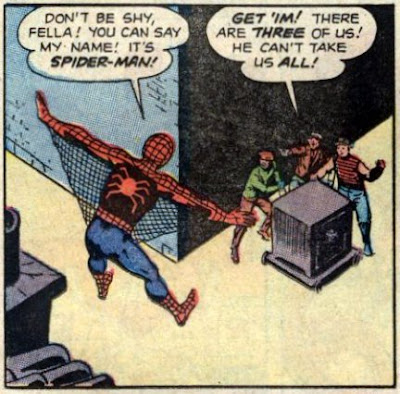 I poured through those MCIC as well when i was growing up. While my older brother had some of the orignals he didn't have them all, and it was great to read FF stories, along with Dr.Strange, the Hulk and Iron-Man.

As far as the big arrow, I suspect that was Stan just giving attention to the fact that these were past stories. I don't think there were any laws stating you had to inform buyer that these were reprints (although this info did appear in the indicia). After a while Marvel didn't even note where the stories were reprinted from, which I thought was a mistake.

Nick, I'm not 100% sure, but I seem to vaguely recall reading a letter in a monthly mag wherein a reader complained about buying one of these 25 cent specials and being disappointed to discover he already had a couple of the stories in their original printings. Perhaps that's why the blurb became so prominent - so that nobody had grounds for complaining they'd been 'misled' into buying a mag which contained stories they'd bought previously.

That's possible, although a lot of the early coveers emphasized that they were reprints.

BTW, I also liked the contents page in the inside from cover of the book, which also contained credits for everyone that usually were not mentioned in regular line, such as Sol Brodsky, Marie Severin and Flo Steinberg.

I actually have many of the original, beat up early issues of MCIC and MT (which are actually from my brothers collection - but don't tell him!)

I love these contents pages too, Nick. The grey-wash really added some depth. (I'm just going to 'phone your brother right now.)

I love the grey-wash too. I believe it wa added by Marie. And aren't all of those splash pages spectcular? We were really living in a great period (the heck with the Golden and Bronze ages!)

There's no denying those '60s Marvel comics were something special, Nick.