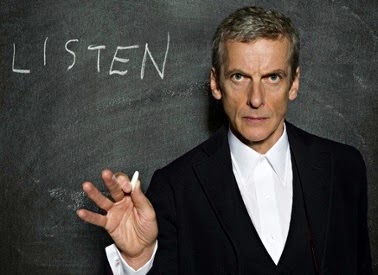 Last night's episode of DOCTOR WHO showed some signs
of being a return to form for STEVEN MOFFAT.  When I first
saw that he'd written the story my heart sank, because, although he
authored some of the better episodes under RUSSELL T. DAVIES,
the ones penned under his own tenure have been pretty naff and his
name usually ensures that some mincing, farcical, over-the-top
BLACKADDER-type tomfoolery is in store.

Last night, however, there was tension, suspense, drama, with
not quite so much comedy as before - at least for the first half hour
or so.  Then it all collapsed to reveal yet another self-indulgent piece of
geekery which tied CLARA into the Doctor's childhood in yet another
self-referencing, too interested in its own history, look how clever
we're being, up its own @rse narcissism.

Also, it's yet another of those stories that creates all kinds of
paradoxes.  If the contemporary Clara influenced The Doctor when
he was a child (a crying, snivelling, frightened - and let's be honest - ir-
ritating one at that) into growing up into the person he is today, then how
could he be that person when she first met him?  It's meant to be clever,
you see, but it just comes across as another poorly thought out-details
don't matter-it's the effect that counts type of meandering yarn
that Moffat is now so infamous for.

I couldn't help but feel that the Doctor was being given some
kind of quasi-religious back story with this tale, with his childhood
self sleeping in a barn and growing up to become the 'saviour' of the
universe.  Started well, but degenerated into the usual disappointing
geek-fest that the show needs to shrug off if it wants to still be
around in another fifty years.

Partly agree. Partly disagree. I hated the first three episodes and only watched last night because the trailer promised something a bit better that the c**p we've been served so far. And to be fair, as you pointed out, Steve Moffat does serve up some good episodes every so often. And you know what, I actually enjoyed it - enjoyed it enough that I'll keep on watching for a few more weeks. Mind you, the first few episodes with David Tennant and Matt Smith were also not the most brilliant and they all got better, so I hope that Peter Capaldi's tenure will follow a similar trend.

I thought the tone, the mood, the pacing, the basic idea, were all spot on, SD - I just didn't like the sudden detour the plot took at the end.

Like you, I thought it was a big improvement on recent offerings but let down by its ending.

While it was, overall, a decent episode, it is hard to avoid the feeling that Moffatt needs to step aside to let a fresh showrunner come in and inject a new direction into things. I'm not sure it's a good idea for any head writer to stick with the show for more than three series.

What puzzles me is how he manages to make Sherlock so entertaining (in the main), but can't seem to get a grip on Who. Then again, the Doctor is a childhood 'toy' to him - perhaps he's too close to it.

I've never seen Sherlock, so I couldn't venture an opinion on that but I think the main problem with Doctor Who is that it lets him loose on the concept of time travel and that's where he starts to tie himself in convoluted knots.

He certainly seems to have a different approach to it than other writers - he needs to rein himself in on some areas and let himself go on others. I just felt he let himself down on that 'The Snowman' type ending.

I've just read Philip Sandifer's rave review - very academic as ever- but I don't see the entertainment in the cleverness. In fact, I come away from most Moffat episodes feeling I've missed something ...and deciding it was never there in the first place.
Not enjoying this series very much - I was interested in the faintly psychedelic Dalek story
( Dr. turns a Dalek on then blows its mind). However, most of the creative decisions however are grating on me: remote, bitchy Doctor; mundane ITV drama love story; horrid remix of theme.

That's how I've felt about most of Moffat's recent stuff. He hasn't learned with the character of the Doctor, who prattles on too much, and still has a bit too much of the buffoon about him. It's like watching Morecambe & Wise sometimes, what with all the back and forth banter between the Doc and Clara. I want a brooding, simmering, angry, dangerous, morally ambiguous (in that we should never be sure just whose side he's on) Doctor.