WHO'S A CHEEKY BOY THEN? 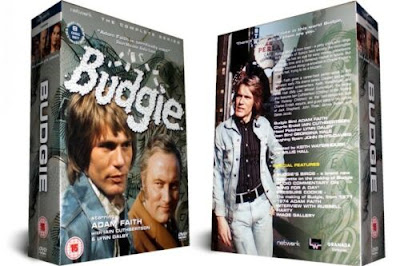 Also recently arrived at Castel Crivens, is the complete 2 series box set of BUDGIE, starring ADAM FAITH and IAIN CUTHBERTSON.  This was an LWT show I watched when it first started in 1971, viewing all 13 episodes of series 1 and the first 8 of series 2 in our previous house, with the final 5 being aired over the first month in our new (and my current) residence in '72.  Around 1985, the show was repeated on Channel 4 while we were ensconced in yet another abode (from which we returned after 4 years to its predecessor), meaning that I last saw them nearly 35 years ago.  Funnily enough, that period seems nowhere near as long as the 13 or so years between the original '70s broadcasts and their '80s repeats (when I was just over twice the age I'd been when I'd first seen them), which just goes to show that time really seems to accelerate the older one gets.  How can 35 years seem of lesser duration than 13?  Unreal, isn't it?!

Anyway, Budgie was a great wee show, and every male in the country fancied his on-screen girlfriend HAZEL (LYNN DALBY) - and his TV wife JEAN (GEORGINA HALE) wasn't half bad either.  No doubt I'll be branded sexist by some people for those observations, but note that it's only called sexism when a man appreciates a woman's physical appearance, not the other way around.  The guy taking off his trousers in the laundromat in the TV ad, or the DIET COKE man taking off his shirt aren't considered sexist, because, as we all know, when women drool over men, it's perfectly acceptable and not offensive in the slightest - he said, sarcastically.  (Those people - male or female - who indulge in such double-standards are total plonkers in my view!  Women indulge in their own form of sexism all the time.)

Anyway, do you remember Budgie?  (No, not the helicopter.)  If so, feel free to say what memories it conjures up for you (if any) if you watched it back in the day.
Posted by Kid at Saturday, January 04, 2020

I Have Vague Memories of budgie, It never really clicked with me as much a the other series at the time, although it was always on in our household, i think my mom had a soft spot for Adam Faith,Great Theme tune though the original one very haunting, always remember that more than any particular episode, Ray Davies also did a theme i don't remember that at all, must have been for the second series.

I never really watched Budgie for Budgie, and I'd be surprised if most fellas did as he was quite an irritating little tit. (I'm talking about the character of course, not the actor.) The star of the show to me was Iain Cuthbertson as Charlie Endell, and Lynn Dalby as Hazel was another good reason for watching. There was talk of a 3rd series, but Adam Faith was badly injured in a car crash, so another series never happened. I was delighted when Charlie received his own 6 episode series in the '70s/'80s, and hope it gets released on DVD before much longer. There were plans to do so a while back, but they were abandoned.