FANCY SOME MARVEL UK BULLPEN BEDLAM? THEN READ ON...

Okay, who remembers the MARVEL UK weekly comic The ORIGINAL X-MEN from back in the early '80s?  If you're a longterm reader, you should at least be familiar with it, as I did a cover gallery of the title on the blog only a few short years ago.  Back then (in the '80s I mean), most British Marvel comics usually contained half-page strips by TIM QUINN & DICKY HOWETT, which were invariably hilarious (I thought) and added something extra to what were mainly reprint comics.

Anyway, I was poring through some back issues of The Original X-Men earlier and re-reading some of the Quinn & Howett lunacy, and thought I'd share a couple of them here.  Hope you enjoy them, and I'd say it's well-past time PANINI (if they own the copyright and haven't done so already) considered colouring the strips by the pair and releasing them in a nice Special Collected Edition.  What say you all? 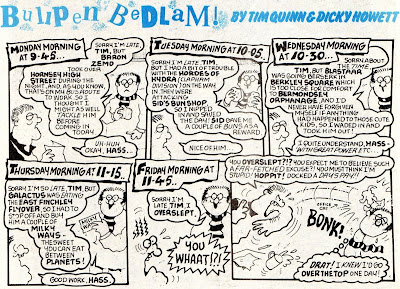 I think they did one with the DWM strips (I seem to remember one anyway), but yes, it'd be nice to see the others, GL.

I’ve just found out there was a Marvel UK special reprinting these strips called Channel 33 1/3.

And guess what, GL! I've GOT it, but had forgotten about it 'til you mentioned it. I'll have to dig it out to see just what strips it includes, but it won't have the two on this post because they didn't appear 'til later. (Unless my memory's gone haywire again as far as 'sequence' goes.)

According to my comic spreadsheet so have I , but completely forgotten about it. If I can find it in my loft I’ll dig it out for a read.

Mine's in a chest of drawers in a cupboard in my bedroom. I might do the same.