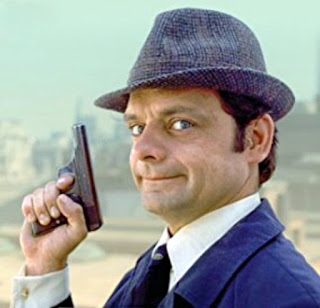 How good is your memory?  Mine used to be excellent at recalling what others might regard as inconsequential details, but even when it was operating at what I con-sidered peak efficiency, time later revealed that my memory banks were fooled on occasion.  And I think I know why.  First, though, let me ask you if you recall The PROTECTORS (of course you do - or at least the theme song - if you're around my age) and The TOP SECRET LIFE Of EDGAR BRIGGS?  Even if you are around my age, that one may have slipped under your radar.  It starred DAVID JASON, and was a weekly half hour TV show that was (sort of) the British version of GET SMART, in that it was a spy spoof, with Jason playing an incompetent assistant to the Commander of the Secret Intelligence Service.

Years after the fact, when I thought back to these shows, I seemed to remember watching bits of them while standing in the kitchen doorway of my previous house, looking at the TV in the living-room.  A couple or so years back, when I checked the broadcast dates of both shows, I was surprised to learn that they didn't debut until I was living in my current home, which my family moved to in 1972.  How could my memories have been so far adrift?  Then I realised that the living-room door (from the hall) of my new house, in relation to where the fireplace and TV were situated, was pretty much in the same place as the kitchen door of my former residence, so my general impression of the layout of both rooms, in memory, tallied.

Same with The SINGING, RINGING TREE.  For years I associated it with the house we lived in between 1960-'64, but when I checked the broadcast dates, it didn't air until after we'd flitted to another house just down the road.  The route to school from our new domicile was about three quarters the same as from our previous one, and my brother, with me in tow, would sometimes trot up the road to our former street in order to accompany his pals from the surrounding houses.  The show made quite an impression, and I recall us all raving over it on our way to school one morning, but because we'd started from just outside my former home, I later erroneously associated it with my old abode rather than the new one.

So it just goes to show how even those of us who have generally excellent memories can sometimes misremember things, resulting in long-standing associations of events and places being slightly out-of-sync.  Do you recall any such similar instances in your own life, Crivvies?  Then jump right in - the comments section awaits your esteemed presence.
Posted by Kid at Tuesday, January 07, 2020

Aye, ye'r no wrong mate! That could be me writing that paragraph about the memory playing tricks.Definitely an age thing.
Have to admit the only reason I recall Edgar Briggs was the painted cover to a weekly issue of Look-in and whilst I know it existed I can't recall actually watching it. That said, it always struck me as a dry run for DangerMouse - ??

Whenever I recall watching Edgar, in memory I'm doing so in my previous house, which is impossible. I think our memories of certain things are just general impressions sometimes, and if one impression is similar to another (earlier or later) one, then that's when the confusion can set in. My memories of things that happened decades ago are still pretty faithful though (with the odd exception), it's just what happened yesterday that I have problems with.

Memory is a subject that fascinates me, something I could talk about for hours. If I still lived in the UK (I emigrated to Germany in 2016) and anywhere near you I'd suggest sitting in a pub from early till late to discuss it in person. I don't think it's just an age issue. Even 20 years ago I noticed that I clearly remembered random unimportant facts from my childhood while forgetting important facts from a few years ago. Memory is a weird thing. What shocks me the most is that the earliest memory I have of my sister (three years younger than me) is her first day at school, when I was eight, even though I have clear memories of my parents and my dogs from the age of two upwards. It's like she didn't exist before then.

Television memories are part of the puzzle. When I bought "The Avengers" (TV series) on DVD in the early 2000's, I realised that I almost perfectly remembered the first Emma Peel episode that I'd only seen once in 1965.

It's a big subject, too much to write about here.

The TV Avengers episode that stands out in my mind is 'The House That Jack Built'. Saw it once in the '60s, saw it again in the '90s and still remembered it all. There are other TV shows like that, but ironically, I can't remember which ones they are at the moment. Sometimes my memories need prompting, but they're still in my brain somewhere. Incidentally, if you type the name of the above episode into my blog's search box, it should take you to a post I wrote about it a few years back.

My memory probably plays tricks at times, and I probably conflate certain times and locations. But I have no way to verify, since you don't know what you don't know.

I do remember thinking that I bought and read DC's The Spectre #1 (1967) in spring or summer, and later realizing that the cover date meant that it would have been in autumn. Maybe I had it mixed up with an issue of Showcase or The Brave & the Bold that featured the character.

Never heard of Edgar Briggs before. 1972 seems a little late for a "Get Smart"-type spy spoof. IIRC, Get Smart premiered in the mid-1960s, near the peak of the spy/secret agent boom in movies and TV.

The Protectors was syndicated in the US, and I remember seeing it (and Gene Barry as The Adventurer) in the 1970s.

The Spectre #1 was dated December, which means that it would've been on sale around September, TC, and in Scotland, Septembers can often have a strong Summer flavour to them. I remember seeing a girlfriend off on September 28th, 1999, and honestly, it was like a bright Summer's day. I daresay it's sometimes the same in the US, so your memory isn't necessarily as far out as you might think.

Actually, Edgar Briggs was first shown in 1974, which is why I couldn't have seen it in the first half of 1972 when I lived in a previous house. It just seems that I did in memory because of the living-room layouts of both houses in relation to the doorway. (Kitchen doorway in one, living-room doorway in the other.) Remember, Bond was still big in 1974, so a Bond style spoof would still have been fairly relevant to UK audiences.

I remember Watching something pretty weird on kids TV I thought this must have been around the Late 1960's my memory of it was so hazy, the only part i could recall was a girl in a castle, surrounded by strange creatures, i was later informed by a friend it was in fact 'Marianne's dreams' or 'escape into night', it was transmitted in 1973!..i was sure it was some obscure European thing from the mid 60's.
Ive since bought the Network DVD of it, it was Ok, a bit disappointing actually!..no were as strange as my memory fooled me into thinking it was.

Funnily enough, when I eventually saw The Singing, Ringing Tree again after having last seen it (I think I caught a couple of repeats in the '70s & '80s), it was every bit as weird as I remembered it. The only difference was that it was in colour and a complete tale, instead of being split into three parts. It still had the English narration, though I wish the option to watch it in three parts had been included on the DVD.

Never seen the singing ringing tree, i've heard a lot about it though.

I think one would've had to see it as a kid for it to mean anything as an adult, RD. Without that past connection, it probably wouldn't appeal to grown-up eyes.