Remember this poster, peeps?  It was given away in return for 8 (I think) cut-out coupons from The MIGHTY WORLD Of MARVEL way back in 1972.  The one you see here is a scan of a preview in one of the weekly issues and is nowhere near as impressive-looking as the actual 'bigger than a breadbox' item itself.  I showed this in a post published back in 2015 (how time flies) and was unsure whether this (and its subsequent SPIDER-MAN COMICS WEEKLY counterpart poster) was produced for the States and then pressed into service in Britain, or vice versa, as I seemed to recall them being advertised in US mags at some point.

Well, I've just seen the one above in an ad (below) in my facsimile edition of The INCREDIBLE HULK #180, the original of which came out in 1974, so it seems that it was produced for the UK first, and then made available in the US. (Unless it had previously appeared in an earlier American issue.)  I still have the impression that I saw the Spidey one in a US mag as well, but so far haven't been able to confirm whether my seeming memory of it is accurate or not.  Still, it seems I've solved the mystery in regard to the above one.  (I have a replacement of the actual full-size poster, but it's never been up on the wall, though my original was back in 1972.)

Anyway, here's a question for all of our Stateside readers:  Did any of you ever have this poster back in the day - or the Spidey one - and if so, just how did you acquire them?  (Reader Phil S probably had them when he stayed in Britain back then, but I'm thinking of those who lived in America at the time.) 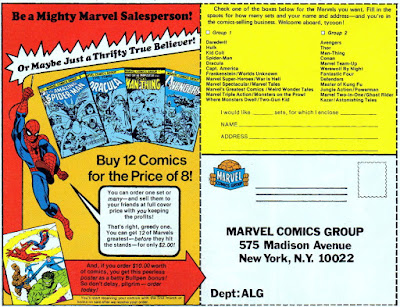 Update: I've just noticed that the ad also appears in F.O.O.M. #5, which I've owned for many years, so I must've seen it at some stage and simply forgotten about it.  And in case you've forgotten what the Spidey poster looked like (or have never seen it before), that's it below.  The colour error on the costume wasn't on the actual poster - only on this preview in an issue of SMCW. 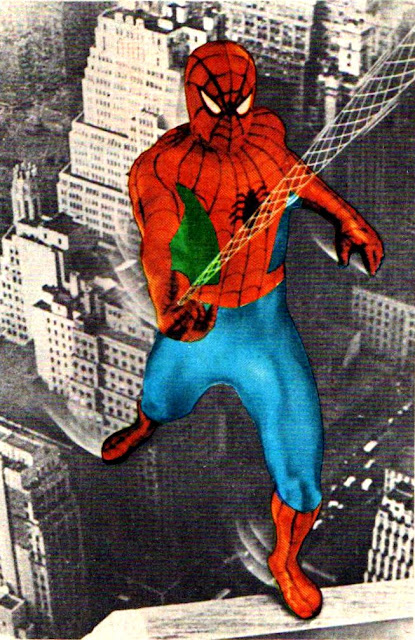 its a brilliant poster, and one that to my embarrassment I had forgotten. The Human Torch figure was subsequently used on the FF's masthead around the time.
Spirit of 64

I can't remember whether I ever noticed that or not - must look out for it, S64.

Last night it occurred to me that today (January 25th) is exactly 45 years since SMCW No.103 went on sale. Why is that important? Because SMCW No.103 was my first ever Spidey comic and my first "proper" Marvel comic following ten weeks reading POTA. And January 25th 1975 was a Saturday as is January 25th today :)

SMCW No.55 was my first one - months after placing a regular order for Avengers Weekly. My local newsagents only had the Avengers and I had to wait for a rare trip into town before seeing SMCW. MWOM was three weeks later.

You sound as if you're as nostalgic about the past as I am, CJ. That's what reading Crivens does to you.

Sad to say, you missed them at their best, CN. MWOM & SMCW were top comics for almost a year (respectively), but once they lost their colour and spot-colour pages and got into the later stories (as well as the page numbers being cut), a little of the magic had departed. Still, as you hadn't seen them before then, it wouldn't have mattered to you in the way it did to earlier readers.