RUMINATING REPOST: LET'S HAVE SOME LIGHT AROUND HERE... 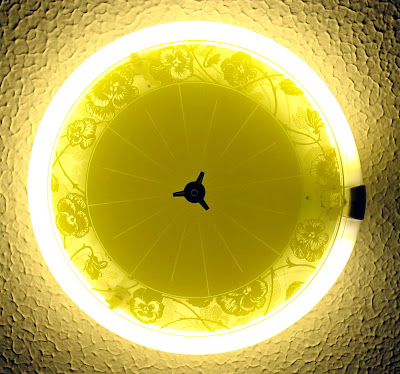 Here's a funny thing.  ("About time!", you cry.)  No, I mean 'funny-peculiar', not 'funny-ha ha' - although it is about time, so to speak.  You know how, when you associate a particular item with a specific place and period in your past, the association sometimes seems 'all-inclusive', whether it actually was or not?

"Good grief!  What's he wittering on about now?" you may be asking yourselves - so I'll tell you.

On my living-room ceiling are two circular fluorescent lights, which were first acquired in a previous house back in the 1960s.  I know we didn't always have them as I remember my father bringing them home one night and having to return one for a replacement the next day (or was it the next week?) because it was broken*.

We'd moved into the house in 1965, but it could've been anytime between 1966 and '67 at the earliest (maybe even '68?) before the lights assumed their place on the ceiling.  I can't remember the exact year we got them, but I now associate them so strongly with the house that, whenever I think back, it seems as if we had them the entire period we resided there, even though I know it isn't so.

Over 30 years ago, I visited my old home for the first time since leaving 16 years before, and was surprised to see patches over our old paper on the ceiling where the lights had once been.  (The patches were still there a few years later and perhaps might yet be there now, for all I know.)  Anyway, seeing that the lights had left their mark for so many years afterwards only reinforced their connection to the house in my mind.

It's the same with toys and comics.  Over the years, I've been lucky enough to re-acquire many items I once had as a child and have now owned them for far longer than I ever had the originals.  Some I originally maybe had for only a few weeks or months, others a year or three - and, as is the way of such things, some were consigned to history long before others made their appearance - yet somehow I seem to remember possessing each and every one of them concurrently and for the same duration.

One example I spoke about in a previous post is the first issue of the revamped SMASH! from March, 1969.  I only had it for around four days before selling it on to a classmate (it was my intention to buy another copy the next day, but I couldn't find one).  However, every page had embedded itself in my memory with such clarity that, when I tracked down a replacement copy over 15 and a half years later, it was instantly familiar - as if I'd last seen it only a few weeks before.

Here's the kicker though - whenever I leaf through its pages, I'm instantly trans-ported back to the living-room of the house I lived in at the time.  What's more, it seems to conjure up every aspect of that house and all the years I lived there, even though I only had the comic for a mere four days.  Uncanny!

So, I don't know about you, but I find it exceedingly strange that some items inform our recollections of a place to such a degree that they seem to represent the entire 'picture' as opposed to only a part of it (if that makes any sense).

If you've any thoughts on the subject, feel free to express them in the comments section.  (And if you can tell me what I've just been talking about, I'd very much appreciate it.)

*It's just occurred to me that I've subconsciously always regarded both lights as being the ones my father brought back on that particular night and which have adorned our ceiling(s) ever since.  However, as related above, one was returned because it was broken, so its replacement was essentially a 'ringer'.  It reminds me of when it was eventually revealed that the first BLUE PETER pup died a few days after his debut appearance, and was hastily substituted with a doppelganger (later christened PETRA).  For many years, viewers believed that the dog they'd watched grow up on TV was the same one they'd first been introduced to, but such was not the case.  I feel sorry for the poor puppy that died, but I suddenly find myself feeling a little sad for the broken light that had to be returned.  Yes, you're right - I'm bonkers.
Posted by Kid at Tuesday, January 14, 2020

I recall something somewhere (yeah, real specific mate!!) about those instances where time appears to slow down subjectively and the boffins reckon that in times of danger or heightened emotions there are a second set or layer of sensors in the brain which kick in and basically record information directly (like a highspeed hi-def camera running at 1000 frames per second) into the cortex, by-passing the conscious mind and laying down these incredibly clear sets of memories which we can recall with crystal clarity even if we can't recall what was for dinner last night. I think it's something to do with the fight or flight response hard-wired into the brain from the days when we shared the planet with beasties that were liable to eat us if we didn't move fast enough (oh God now I'm thinking of the old joke about 2 guys running from a lion and one of them stops to put on running shoes - I'm sure you recall the punchline as we're about the same age and I think it was on an episode of the Comedians). Anyhoo, the comics aficionado in you (and me too because I go through the same thing) must have recognised the material as important in your formative years and block remembered the entire set of circumstances around them. Probably why we both became comics fans and other people maybe had that response to a football match or a chess game etc. The irony is of course that I'm damned if I can recall where I saw the programme I learned this from!!

The Comedians - now there's a blast from the past, MN. That's an interesting theory, but I have another one, which is: When you have a lot of different memories associated with one place, the common denominator (in this case my former house) links each memory to one another, so that when you consciously think of one, you're also subconsciously thinking of the others, and they all become a collective whole. So when I consciously think of something that happened in that house at any given point in time, all the other events in that house and the time spent in it are are floating around in the background and adding to the texture of the one particular event being consciously recalled. I've expressed that (on the hoof) in my customary nebulous way, but hopefully it makes some kind of sense.

Have to say that given the way the brain works that's not at all a bad theory kid. If I find the other programme I'll give you a shout, ok?