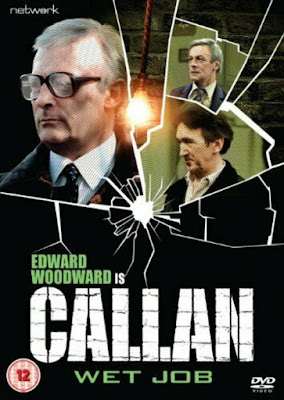 Between frequent sleeps ('cos I kept dozing off about every 10 minutes) I finally managed to get through my CALLAN DVDs, which I thoroughly enjoyed.  (Don't want you thinking they're boring, it's just that I have a slight medical condition which fatigues me.)  The last one I watched was WET JOB, a Special first screened in 1981, but which I didn't see until 1984 or thereabouts.  I wasn't too impressed by it back then, but it's actually better than I remembered, though the awful pieces of incidental music that punctuate the soundtrack from time-to-time are intrusive and ill-suited. I'd suggest that if it's ever re-shown on TV, then the music should be omitted or something more appropriate substituted in its place.

It's a shame that LISA LANGDON didn't reprise her role of HUNTER's secretary, LIZ, but she wasn't in the 1974 movie either, nor was ANTHONY VALENTINE, his role of TOBY MERES being played by PETER EGAN.  In Wet Job, we learn (in passing) that Meres is now dead, killed by the irate husband of one of Mere's conquests apparently, but it would've been nice to hear he was yet alive and simply retired.  In the final TV series' last episode, LONELY, played by RUSSELL HUNTER, was shot and wounded, and Callan walks into the distance with his back to the camera, similar to JOHN WAYNE at the end of The SEARCHERS.

EDWARD WOODWARD turns in a fine performance in Wet Job, but isn't quite as intense in the role as in the TV series, though perhaps that's deliberate in order to suggest that the fire in his soul has slightly abated now that he's older, wearier, and retired.  (Well, he thinks he's retired.)  After the uncertain and downbeat way the TV show ended in 1972, it's good to see that the characters of Callan and Lonely didn't fall foul of the S.I.S., as Hunter (played by WILLIAM SQUIRE) threatened to 'break' Callan, making it easy for viewers, in the absence of a fifth series, to imagine that both Callan and Lonely might be terminated to clean up loose ends.

As I said in a previous post, when I first saw this feature-length Special, I was living in another house and neighbourhood, and was unaware that the show was a repeat. Until watching the DVD, I hadn't seen it in 35-36 years, so it felt 'right' to finally see it again, in the house I stayed when it was originally broadcast ('81), having returned in 1987, four years after having flitted in 1983.  However, the 'ghost' of my room in that other house was present as I re-watched the Special, and that's where I'll probably always associate it with.

Anyway, if you're a Callan fan, you'll likely enjoy Wet Job, but do your best to ignore the bloody awful incidental music, which is like something more suited to TV Soap CROSSROADS.  Oh, one last thing:  The synopsis on the back of the DVD cover says that Callan meets "the fourth 'Hunter' of his career", but it's actually the fifth, and Callan confirms that he worked under four previous Hunters in response to a question by the new one.  Whoever wrote the spiel wasn't paying attention.  (I'm not counting ERIC PORTER as a sixth Hunter in the '74 movie as that was only an expanded remake of 'A MAGNUM For SCHNEIDER'.)
Posted by Kid at Friday, January 24, 2020

I Thought George Sewell was excellent in this, good story, i would definitely liked to have seen more new episodes, Brilliant character 'Callan'and Woodwards Portrayal was Superb, yes i agree about the Awful Soundtrack, really out of Place.

It's a shame it didn't have the 'Girl In The Dark/A Man Alone' theme used in the four series, which would've added to the mood, but I think there were copyright problems involved. Whoever picked the awful incidental music should've been fired.

I think that's why the show wasn't that well-received at the time - the incidental music gave it a 'soap'-type quality.