THUNDERBIRDS OUTFIT FROM THE '60s... 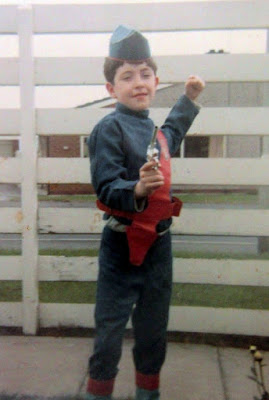 Here's a photograph I 'borrowed' from ebay, simply because I'd have killed for a THUNDERBIRDS outfit like this when I was a kid.  Only thing that lets him down is his gun, which looks like a LONE STAR cowboy pistol, instead of the official INTERNATIONAL RESCUE sidearm that the TRACY brothers were issued with. I've got the hat and water pistol version of the gun from the '60s, all I need now is the rest of the cozzie.  (Adult size, of course.)

Going from the house seen across the road, the photo looks as if it could've been taken in a new development (well, it was new in the '60s) on the other side of a field at the bottom of the street from where I lived at the time.  (I'm not suggesting that it was, merely that there's a similarity.)  It would be great if the adult version of the kid in the pic got to see this and left a comment - or even someone who knows him.

Did any of you have a Thunderbirds outfit, Crivs, and what are your memories of gadding about as one of the Tracys back in the swinging '60s?  And below, just for you, are the replacements for my original hat and gun, which I've had for far longer than their predecessors.  It would be great if I could acquire a life-size TB2 to go with them, but I suppose that's too much to hope for. 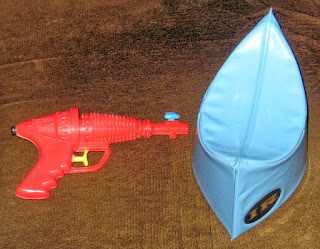 Talking of GERRY ANDERSON outfits, a girl who lived next door to me (in a previous house) in 1965 told me one day that her mother was making a STEVE ZODIAC outfit for me - and I believed her.  Turned out it was a product of her imagination, as I found to my great disappointment when, after about a week, I chapped their front door and asked the mother how it was coming along.  Of course, she hadn't a clue what I was on about, much to my embarrassment.  Bah!  Females - never trusted one since!  (Sexist?  Never!)
Posted by Kid at Tuesday, January 28, 2020

Unusually I never Had A Thunderbirds Outfit, Even though as a 4 year old, i was absolutely hooked, my mom & dad told me i would sit from around midday till the evening when it started, in front of the TV refusing to move, i have very vague memory's of this, in later years, towards the end of the 70's i started to collect various bits & pieces i had had as a child, i eventually ended up with a room full of Anderson toys & memorabilia, all of which i sold in 1997 (i needed the Money).
Its Still My favorite TV Series ever, the great opening titles, and Barry Grays fantastic theme (as with most of the Anderson Shows).
I Still watch it from time to time, I have the DVD collection, and some on Old VHS tapes from the 1981 Re-shows, and the BBC 2 early 90's re shows..the 1981 re-shows being the best, as they still have the Old classic ATV opening, which i always remembered from the first time i saw it Living, as i was, in Birmingham at the time.

All I had was the hat and the gun, plus the Dinky TB2 and FAB 1, RD. Oh, and the Sugar Smacks giveaways of the various craft. Alan Fennell, the editor of the Thunderbirds comic in the '90s (and TV21 in the '60s) was going to arrange it for me to do some lettering on the comic, but it was cancelled before he could make it happen. I have all the DVD box sets from Supercar up to UFO, but still haven't watched them yet. Incidentally, the BBC repeats in the early '90s was the first time the show was broadcast across the nation at the same time; before then the show was aired at different times in different regions.

Yes That's Right, I remember the 1981 Re-showings really well, I Read in the NME that Thunderbirds was showing at 10-30 on Saturday Mornings, Followed by Joe 90, these proved to be very successful that other regions Started showing them too, ATV screened them on Sundays at 1, i Missed "trapped in the sky" as i was on holiday in Bournemouth, but i caught "day of disaster" there, as they had started the showings a month or so before ATV, i remember reading in the Local paper the Pubs were emptying at dinnertime, as Men of a certain age were rushing home to watch it!

What amazes me about the Gerry Anderson shows, RD, is that the designs of the various vehicles were so good, that not even recent tweaks for movies or new TV episodes have improved them, only made them slightly different. I find it impossible to imagine that Stingray could ever be improved - it was just so perfect.

yes, timeless.all those original designs were fantastic, the SPV..its Brilliant,my all time fave, that & Thunderbird 2, I loved my Rosenthal Thunderbird 2, i must get another at some point, the one with the Jeep, that's the one i had.
Oh..and yes i had the Hat & Gun too, but not the complete outfit.

There's a pic of my JR21 on the blog somewhere. My original had the jeep, my replacement doesn't, but has the box. Until I track down a replacement jeep, I'm using a substitute. Type TB2 into my blog's search box and you should see the post.

Hi Kid, yes seen it..looks great, I'm sure an original Jeep will turn up on E bay at some point.

I just hope it's not too expensive. There was a red version as well, but it's the green one I'm looking for.