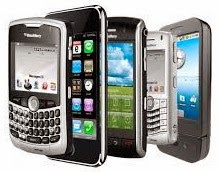 Mobile 'phones?  Mobile ruddy 'phones?  Don't get me started!  Am I alone in con-sidering them to be the most irritating, infuriating, antisocial invention of modern times?  Help me salvage some rapidly-fading remnant of my hard-pressed sanity and tell me that I'm not the only person on the planet who thinks so.

Don't get me wrong though.  Mobiles are all very well - in their place!  And that place is for making or receiving important calls which, if missed, could leave us knee-deep in the soft, smelly brown stuff.  The trouble is, however, that very few calls or texts actually fall into that category.

The telephone, once a practical and useful tool, has now been demoted to a mere toy - an idle distraction for the easily bored and the feeble-minded, who can never be content to simply be alone with their thoughts on account of not having any to begin with;  who have absolutely nothing to say worth saying, but, thanks to the workings of a perverse fate, now have the technology with which to say or text it anyway.

Just think - all over the world, literally millions of people are exchanging such pointless, badly-spelt and punctuation-free drivel countless times a day.  And simply because they can, not because they actually need to.

"But if people are using their mobiles to keep in touch, then in what way are they being antisocial?" you might ask.  Pay attention the next time you see a group of people anywhere.  It's not uncommon to see friends or partners oblivious to one another as they gab or text away on their mobiles to someone else.  Why not just go out with the person on their 'phone if they'd seemingly rather talk to them at the expense of whoever they're with?

That's why they're antisocial.  They drive a wedge between actual physical company and divert the attention of those who should be interacting with each other, as opposed to some ethereal voice or illiterate text on a mobile.  If you were out with some friends who barely spoke a word to you because they were engrossed in deep conversation with one another, it's a safe bet that you wouldn't be too impressed by their manners.

So in what way is it any less rude to ignore those you're with to talk or text on a mobile to someone else?  That disembodied master or mistress whose imperious summons (heralded not by a heavenly fanfare, but rather a tacky and irritating ring-tone) must be answered immediately and cannot be ignored.

Well, excuse me, but I've always thought that technology was supposed to be at our disposal and for our convenience, not the other way around.  Hear that mobile ring - see its slave give a convincing impression of someone who's just had a tub of itching powder dumped down the back of their neck as, seemingly in the throes of spasm, they frantically check every pocket or aperture that fashion provides in order to obtain their regular fix of 'mobile madness'.

This madness, however, isn't confined only to adults.  Children as young as 11 or 12 are falling victim to Repetitive Strain Injury (RSI), brought on by continually texting their friends.  RSI?  That's got to be one hell of a lot of texting!

How sad.  Where kids once merrily played together in fields and parks or each others' gardens, they now spend a disproportionate amount of time in their rooms texting (or emailing) their pals, instead of interacting together face-to-face.  And, just like 'adults', when they are with their pals, they often ignore them while they text friends who are elsewhere.

"A fool and his money are soon parted" runs the old saying.  Considering the obscene profits reaped by mobile 'phone companies from the exchange of  unnecessary communications between simpletons, it's plain to see that this maxim is true many millions of times over.

Mobiles are brilliant Kid, BUT I agree they are totally abused by most folk that don't seem to be able to go 5 mins without using them. I've seen groups of friends out in bars etc and everyone of them on their mobiles talking to/texting other folk . As for text speak not an issue for me makes it easy to send a quick message but text talk that annoys me no end . For full disclosure I'm sending this via my mobile.

I first bought a mobile phone in 2003 so I could keep in touch with my elderly mother wherever I was . My mother died in 2009 but I still keep a mobile because they are useful for contacting BT if my landline goes down - which has happened 3 times in recent years! But I too detest these idiots who are never off their phones.

Actually, when I first wrote this piece (intended for the local newspaper, but it was never printed), I didn't have a mobile. Some time later, someone bought me one as a present. However, I mainly use it (its replacement actually, as the original one died) to send an occasional text when arranging to meet friends - or to check what time it is.

I do have a mobile phone, the two I've had coming my way as hand-me-downs whenever my wife upgrades and on a purely convenience level I do find them handy, for example not always having driven a car as reliable as the one I have now and being able to call for roadside assist was very convenient. As I rule I take more photos than phone calls on the thing and use it in place of a watch (I've also had a few unreliable time pieces as well).

It's the cult of the phone that annoys me though and I agree with everything that you say in regard to that! I drive to the station and take a train to work each day and you can look down the platform and easily 95% of the people are gazing at their phone, same as you look around the train carriage, and that's not to mention the noisy ring tones that some people seem to take ages to respond to or the loud conversation that you can hear at the other end of the train when they do! And then there are those that listen to music (or what passes for music these days) on their phones with the sound still being audible despite their ear buds. Having said earbuds in also provides a convenient way for some selfish sods to pretend that they don't see any older or more infirm passengers having to stand that may benefit more from a seat that they could give up. I think it's that side of it that annoys me the most - manners and courtesy seem to in decline in general out there and the cult of the mobile phone just seems to be accelorating and facilitating that trend.

New technology does not always improve the society that is so quick to adopt it!

I'd agree that mobile 'phones can be handy, PC, I've found mine to be the case on more than one occasion. As you say, though, it's become a bit of a cult (no, that's the word I meant) over the years, and I find it annoying that, when you're with someone, anyone who 'phones them receives priority in the attention stakes. I guarantee that, the next time (if there is one) I'm in the company of a woman and her mobile rings, if she doesn't say "Can't talk now, I'm with someone, I'll call you later" then it's goodbye from me and I'll leave her to it. And some people don't seem to be able to grasp the concept of a 'phone and feel the need to shout into it as if the person on the other end wouldn't otherwise be able to hear them, then everyone else (especially on a train) has to endure a shouty, one-sided conversation. My 'phone is just a basic 'phone, no fancy gimmicks, no camera (though I did have a mobile with a camera for a short time), 'cos I only need it to be a 'phone, not a teas-maid, not a computer, not a photographic studio, and not a TV - just a 'phone. That way, I know exactly where I am with it. Then there's the people who walk into you 'cos they're staring down at their 'phones. Beam me up, Scotty!

Oh yeah, I forgot about the walk and text crowd (or whatever the hell they are doing) and I deliberately walk at these people to make them jump as they realise at the last minute they may collide with another pedestrian. There are even traffic warnings on the footpath is some parts of the city to catch the eye of people looking down at their phones. Just how far do we have to go to accomodate the stupidy of people who can't pocket the thing long enough to save their own lives, be it crossing a busy road, or god-forbid, while they are driving!!

Beam me up scotty indeed! (and isn't if funny how the Star Trek Communicator presaged the flip-up mobile phones of a few years back)

I see drivers on mobiles all the time, PC - too thick to realise they're a danger to themselves as well as others. Should be an instant two year driving ban if they're caught, as well as whatever the fine is.

Yeah, the 'Scotty' remark was my attempt at irony - glad you caught it.