PUSSY IN BOOTS - THE SEQUEL... 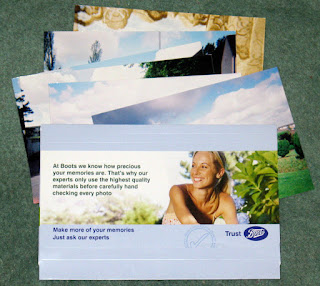 In the previous post, I made passing reference to a pharmacy colleague of the lovely ELIZABETH, said workmate being the one who wagered (with the full involvement and approval of the others) that I wouldn't be able to find out two specific items of information about Liz.  Now, truth be told, this colleague was a bit snooty and up herself, and always presented herself as being a bit prim and proper and above mere ordinary mortals like myself, a lowly warehouse worker.  Here's a little tale of how, based on my daring detective work related earlier, she sh*t a brick, thinking I had access to all sorts of secrets best kept hidden.

One of my occasional duties in BOOTS warehouse was operating the 'baler', a huge machine for compressing wastepaper and cardboard boxes into large compact cubes. There was a part-time worker assigned to this task, but when he wasn't in, it fell to me or another of the warehouse staff to do it.  Anyway, one day, I was busily feeding all sorts of paper waste from an oblong trolley into the machine, including 'wallets' of photographs which had remained uncollected by customers for months.  It was the company's policy, due to limited storage space, to dispose of all abandoned photos after a certain period.

In a moment of idle curiosity, I picked up one of the thin cardboard wallets at random, and took a casual look through it - and was surprised to see a few pics of the snooty pharmacy worker, completely rat-@rsed at a party.  Gone was her reserved and 'dignified' demeanour - she looked completely blotto and uninhibited, and totally different from the image of herself she presented at work.  (Which is fair enough I suppose - after all, it was a party.)  Anyway, I thought she'd like to have them, so took them around to the pharmacy and gave them to her, freely telling her I'd found them in a trolley of waste earmarked for disposal.  She took one look at them and quickly thrust them into the pocket of her white coat, looking a bit flushed and flustered.

I returned to the baler, but a little while later, she came into the warehouse and quizzed me on where I'd obtained the photos, trying to inject a tone of stern authority into her voice.  Obviously, because of my dazzling detective work in the case of Elizabeth, her imagination had been working overtime, causing her to wonder if I had specifically 'targetted' her, and whether my discovery of the photos had been as a result of me deliberately digging into her life.  Nope, pure random chance and sheer coincidence!  Anyway, I was a bit surprised, to say nothing of annoyed, at her obvious insinuation and told her it was exactly as I'd first said when I gave them to her - I'd found them in the waste trolley.

She appeared satisfied, albeit reluctantly, perhaps sensing that I was affronted by her unspoken-but-obvious suspicion, and pushed off back to the pharmacy.  Maybe I should've been more annoyed than I was (after all, I'd being doing her a favour), but I couldn't help but be enormously amused at her paranoia, and even pleased to a degree that I'd gotten under her skin (purely metaphorically you understand) and caused her a moment's perturbation.  Snooty people like her deserve to be toppled from their high horse in my view - and that's exactly what I did.

Any youthful tales of a similar nature, fellow Crivs?  Reveal all in the comments section - if you dare!
Posted by Kid at Tuesday, January 14, 2020