RIVETING REPOST: TAKE A LOOK AT THIS LOLLY - FAB FOR 50 YEARS... 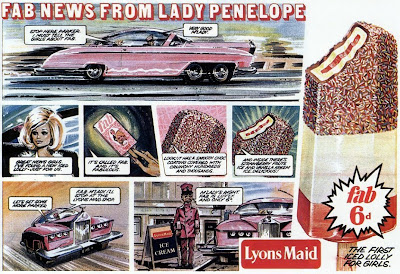 Back in 2004, I was shopping in my local supermarket one night
('twas the servants' day off), when I espied a box of FAB iced lollies
in the refrigerated display cabinet designated for such items.  The box
featured a promotional tie-in to the THUNDERBIRDS film released
at the time, and I was heartened to see that this humble iced lolly
had not forgotten nor abandoned its 1960s roots.

You see, dear reader, this particular item of frozen confectionery
was linked to Thunderbirds from its very inception, being named after
the GERRY ANDERSON programme's 'call sign' and touted as "The
First Iced Lolly For Girls".  Of course, such sexist distinctions have
long since been forgotten and, as far as I'm aware, this LYONS MAID
favourite is still around today.  I know ZOOM iced lolly (as advertised
by FIREBALL XL5's STEVE ZODIAC) was likewise obtainable
a few years ago, but does anyone know if that's still the case?

I must look in the fridge the next time I'm in SAINSBURY'S.

Lyons Maid was sold to NESTLE in 1992, but the brand
was revived in '08, though I'm unsure if it's still going.  However,
I was doing my shopping a couple of days back and bought a box of
Fabs, which celebrates 50 years this year.  Below are pictures of the
box and one of the wrappers (I've also shown the Lyons Maid logo).
I find it reassuring, in light of the many changes that've happened
over the years, to still have something around that goes all the
way back to my childhood days.  Isn't that just Fab?! 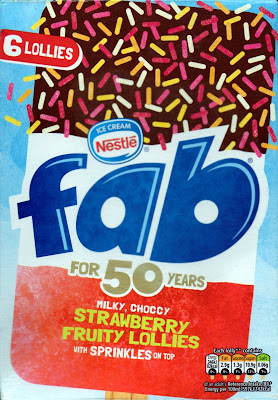 That Lyons Maid sign reminds me of my village shop in the '70s which had the sign standing outside. All us kids would go there regularly to buy ice lollies including Fab of course. Another ice lolly I fondly remember is Space: 1999 - that lolly takes me back to the legendary hot summer of '76. The village shop closed in the '80s and became a house but I'm so glad it existed when I was a kid :)

I only have to look at this and I can taste its "pinkness" again! Is it really 50 years later?
Gordon Bennett!

I had some "Fabs" last week from Morrison's I think - I also had a "Zoom" not that long ago as well, not sure if it was called that or was just a copy - both were great though - strangely back then, Fab was always a lolly for the girls and Zoom for the boys and never the twain shall meet - then again I was brought up in Glasgow in the 60s and well you know, not the worlds most PC city at that time (but it was still brilliant).

I bought some 'rocket' lollies at the same time as the Fabs, PM - they're Zooms in everything but name. I don't think I could've been paying too much attention to the ads back in the '60s, because I don't recall Fab being intended as a lolly exclusively for girls, but as we all know - ads don't lie.

Unfortunately I can't recall what the Space 1999 lolly looked like or tasted like but I vividly remember eating one while sitting on a hillside near the village shop. And today is the first time I ever knew that Fabs were meant for girls - but it was only about 3 or 4 years ago that I discovered Nancy Drew was meant for girls. I was a big fan of The Three Investigators/Hardy Boys/Nancy Drew mysteries and it never once occurred to me that Nancy Drew was for girls !

I think the fact it was ABOUT a girl might've been a clue, CJ. I've read a couple of Hardy Boys books, but I much prefer The Three Investigators. Do you remember the Dracula ice lolly? (Might've been by Walls.) It had a sort of red jelly inside. I quite liked them.

Kid, I was thinking about the Dracula lolly earlier - another one I remember was called Funny Face or Funny Feet or something like that.

There was a Funny Face (or Faces) AND a Funny Feet ice lolly, CJ, but I think the Feet one replaced the Faces one. I remember being amazed back in the late '80s or early '90s (which only seems like a few years ago to me) to actually see them still on sale, so I bought one and scoffed it. I actually got it from the same shop I'd first bought one (it's predecessor, the Faces one) as a kid. I think they were reintroduced 3 or 4 years back (after a customer campaign), but don't know if they're still available.

I've got a few British Marvels that have the ad on the back cover (or elsewhere), PM. I miss the old manufacturers' names, such as Rowntree's Kit-Kat, MacKintosh's Caramac, and various others, who now all seem to have been taken over by Nestle.

I got to thinking, besides the ones mentioned on this thread, there were also two separate Doctor Who lollies and a Fireball one, so somebody ( cough! ) should do a post on them all?

Who knows, maybe someone will. (Although, if you can beat me to it, feel free, JP.)

Another ice lolly I loved was the cider-flavoured one. I know you don't drink alcohol, Kid, but have you ever tasted cider ? My village had two pubs and I remember going to one of them (The Red Cow) when I was about 10 with my friend and his father and we sat outside drinking cider which tasted more like pop than an alcoholic drink as it was sweet and fizzy. Cider is a delicious drink if you've never tasted it.

Never tasted cider, CJ, but if there's ever been a cider-flavoured soft drink, I may have tasted that. I've certainly smelt it 'though, as most of my teenage pals drank alcohol, and I've smelt the fumes from time to time. (From a distance, in years long-gone.)

I went around our corner shop and said, "Can I have a Funny Face, please?" and the woman behind the counter said, "You've already got one!"

Ah, the old ones are the best, JP. I remember that joke from back in the day.