RIDICULOUS REPOST: ARREST ME OFFICER! I USED TO PUNCH YOGI BEAR ON A REGULAR BASIS (UPDATED)... 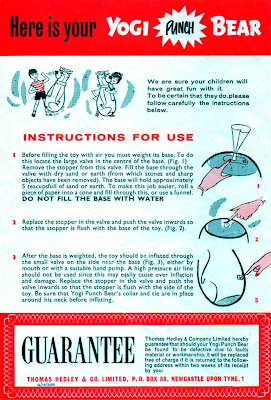 Bought the above leaflet via ebay recently for a couple of quid.  It's the instructions for the YOGI 'PUNCH' BEAR, the one advertised in the special offer below, and which I owned as a child.  I've got the promotional leaflet and the instructions, so hopefully it won't be too long before I finally re-acquire an inflatable Yogi himself.  (No, Melvin, it's not that kind of inflatable - behave yourself.  Tsk!  Tsk!) 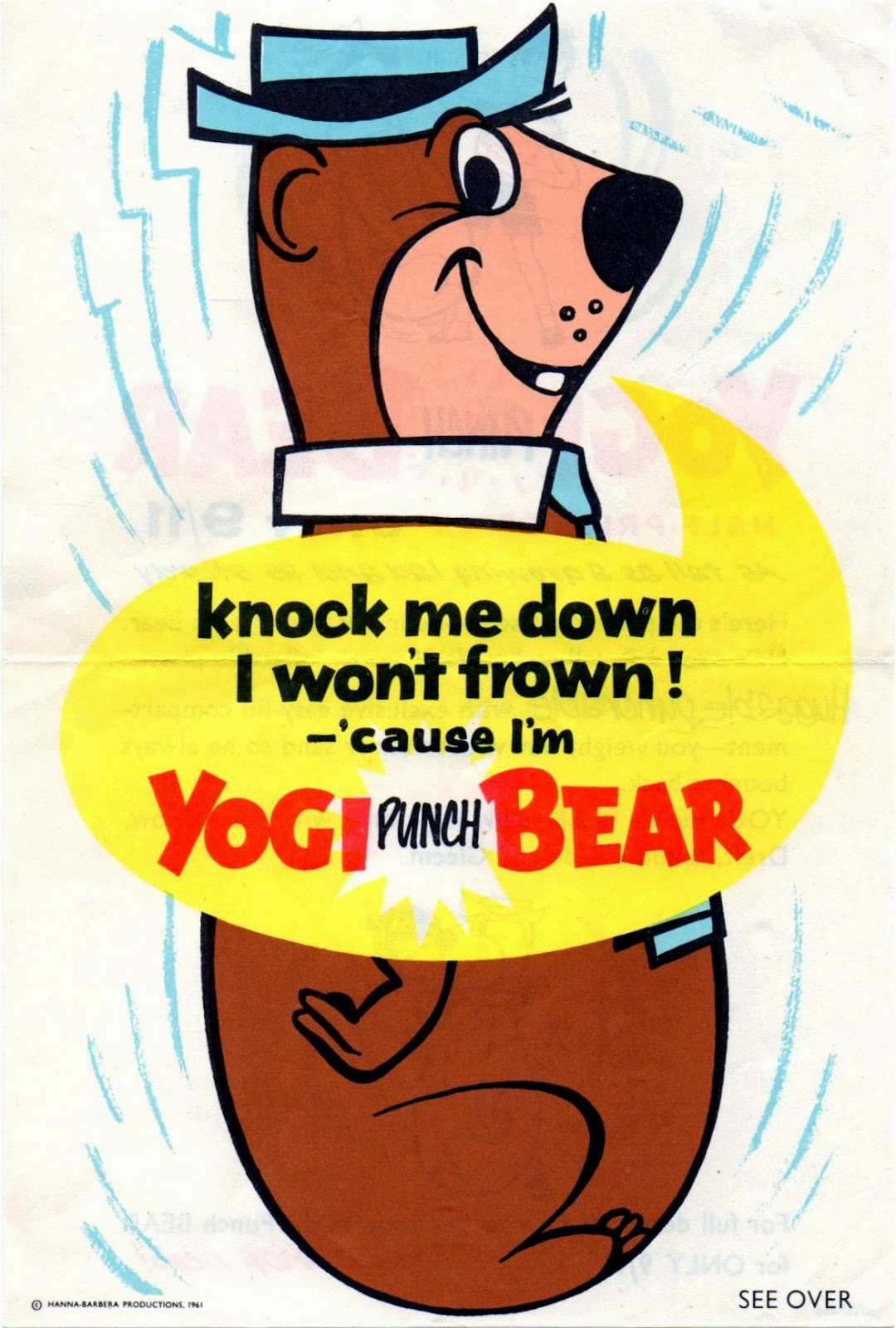 It's amazing what you find out long after the fact.  Case in point:  When I was three or four, I remember my father inflating a YOGI BEAR figure while sitting on the back step at the side of the house.  (Yeah, the 'back' door was at the side of the house - go figger!)  I had what seemed like loads of Yogi merchandise when I was young.  In that house alone, I had a MARX Yogi on a scooter, a cardboard Yogi Hallowe'en mask, a pair of Yogi slippers (with little Yogi heads on the toes) and the above inflatable Yogi.  (I also had a Marx Yogi & Huck ramp walker about this time, but I may not have got that until we'd moved to our next house, I'm not sure.)

I loved punching the bejabbers out of my inflatable Yogi (in an affectionate way, of course), but no longer remember exactly what happened to him.  I have a vague idea that he sprung a leak and was discreetly disposed of, but I probably wasn't told of his fate at the time.  I recall my dad putting sand in the base to weigh him down on the day that Yogi first arrived, but I never knew where he'd come from - until now that is. (Confusingly, note that the instructions say not to use water to weigh Yogi down, yet the promotional leaflet says that water can be used.)  I recently bought this very flyer, which reveals that the punch toy was a special offer from FAIRY SNOW and associated washing powders - so, over 50 years later, I at last know where one of my best boyhood buddies originated.  Now if only I could find a replacement.  Anyone know where I can get one?  If so, I'll let you have the first punch.

Did anyone else have an inflatable Yogi when they were a kid?  (No - an inflatable sheep doesn't count, you perv!)  Then leave your reminiscences in the comments section. 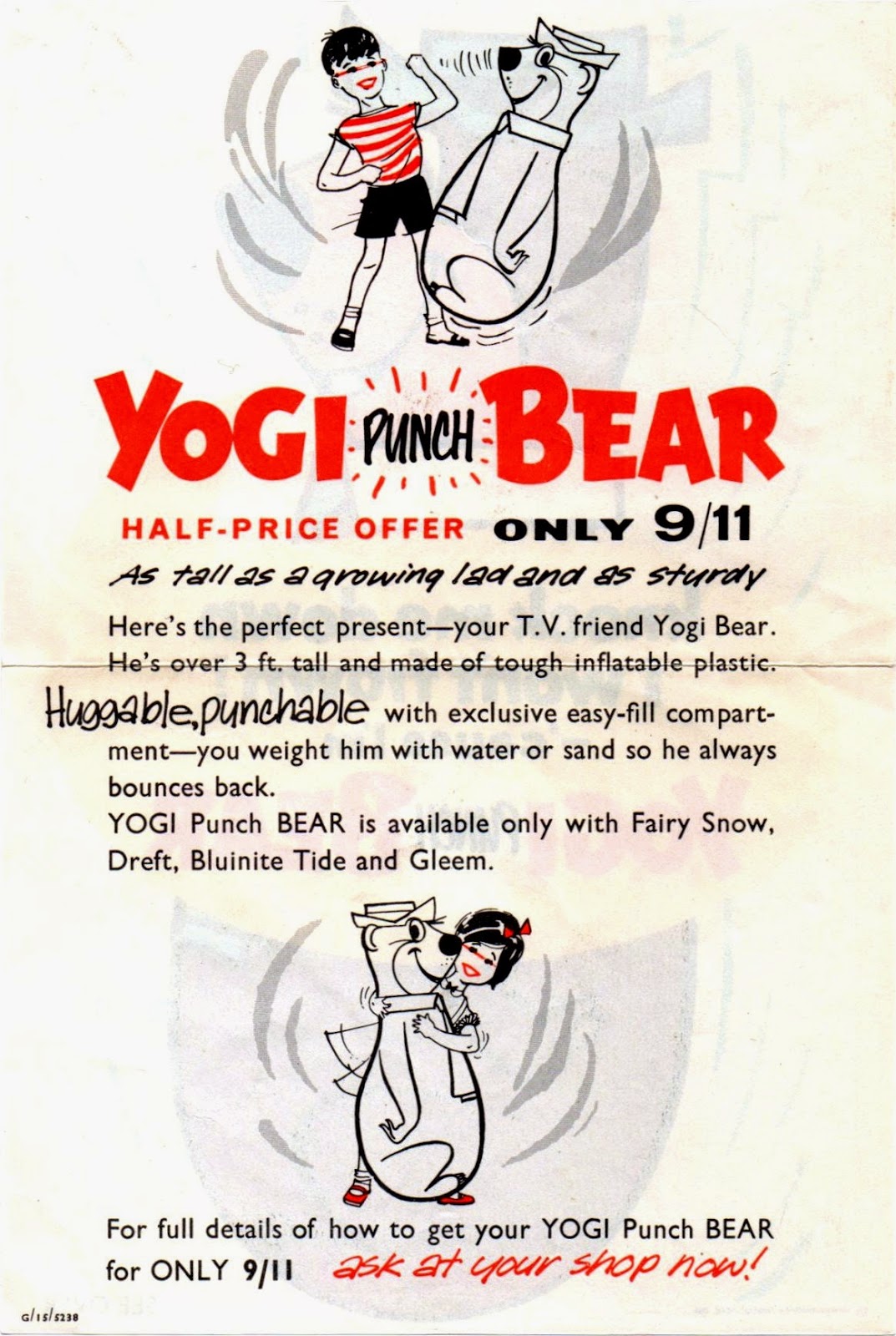 And below is an inflatable Yogi, though whether it's the same make as the one I had, I couldn't say. 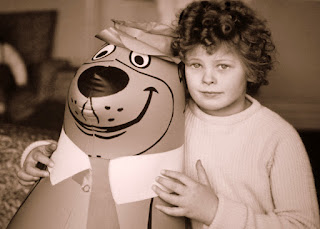 IIRC, I had an inflatable toy punching bag when I was pre-school age. It was not Yogi Bear; it may have been Popeye, although I'm not 100% sure.

I like Popeye as well, TC, but I'm not sure whether or not I knew anything about him back then. I'd love to have the inflatable Yogi again, along with my Yogi Hallowe'en mask, and slippers (with a rubber Yogi head sitting above the toe area of each slipper). I'll have to Google 'inflatable Popeye' - that'll probably draw the vice squad's attention.

I confess....I had an inflatable giant Yogi Bear as a youngling and like so much of those early years I wonder where it all went. The semi-attached plastic blue hat, white collar and blue tie, the sand filled base, it all comes back....but most of all I remember the smell. That redolant bouquet of tan coloured vinyl which it never lost until old Yogi disappeared into the mists of history.

This little prompt has also brought to mind my old blown-mold Yogi Bear bank (about 7" high). It survived longer than inflatable Yogi. The money slot was atop the black hat and accessible through a metal disc under his feet. I remember I repainted the hat due to wear but soon lost the bottom disc. Yogi hung on for a while before an inevitable clear-out. And so went childhood.

I've got two Yogi Bear banks, G, one from the '60s and one from the '70s. The '70s one I bought in Lewis's in Glasgow in the late '70s I think, and I've still got it. The '60s one I bought through eBay a number of years ago. By the way, do you think that little slot in his hat means that he's got a good head for money?