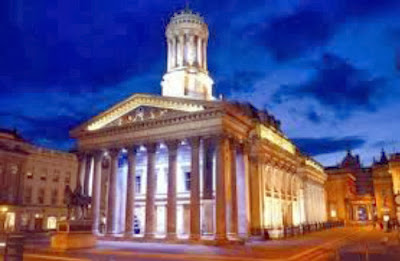 Here's a curious tale which I can't actually recall if I've recounted before or not, although I've meant to for a while now.  Back in August of 1999, myself and a young lady were spending the day in Glasgow and decided to drop in to the Gallery of Modern Art in Royal Exchange Square.  One of the exhibits we looked at was a 'kinetic sculpture' by EDUARD BERSUDSKY, entitled An Autumn Walk in the Belle Epoque of Perestroyka (Meta-Tinguely).

It was scheduled to begin at a certain time, but with a dozen or so people seated and expectant, the minutes crept past the annointed hour without the demonstration of the complex contraption commencing.  The girl I was with (who, for the purpose of this tale we'll call Sally) went off to enquire about what was happening, only to find out that it had been cancelled due to some kind of technical fault.  (A sign at the entrance informing us of the fact would have been appreciated.)

Anyway, disappointed, we filed out to look at other exhibits and soon forgot about what we'd missed.  Not long after, Sally returned to her own country for a while, although I saw her again on two more occasions when she was back in Scotland some time later.  However, she doesn't feature in the rest of this story, so exit Sally, stage left.  Well, in an odd kind of way, that's not quite true, but let's take each step as it comes.  (The best way to take steps, I believe.)

A year later to the very day, I was in Glasgow and decided to revisit the Gallery once more.  Much to my surprise, the exhibit that had been out of order twelve months before was still on display - and just about to begin.  I entered the room and, believe it or not, the exact same two seats at the far end of the row that Sally and I had occupied were empty, so I parked myself on the very one I had sat on previously.

For the next several minutes, the audience sat in rapt attention as the display went through its pre-ordained mechanical repertoire.  When it had completed its revolutions, I instinctively turned to Sally to ask her opinion of what we had just witnessed - only to be surprised for a split-second to find her chair empty.  Then reality kicked in and I realized my mind had automatically jumped back a year, momentarily duped by the near pefect re-creation of the previous year's events.

Bizarre I know, but for a moment I had experienced something extremely akin to time-travel - even if it was only in my mind.  Has anyone else ever had a similar experience?  Feel free to share.
Posted by Kid at Saturday, August 20, 2016

I think it's quite a common feeling, it's what happens when you miss someone, it could be a friend, family member or a pet that might arouse the same feeling. You find yourself anticipating their presence, even making the same preparations and adjustments even though they're no longer around. I think it's likely that some remorse arising from your prior disappointment played a part in this episode. Once the spectacle had finished, you found yourself in a state of mind that might arise from an experience shared while in the company of your friend. Two episodes in the same location, in circumstances that you don't normally experience will evoke a strong association between them. Twenty years from now, if you hadn't made a record of the event, the confusion might've grown stronger and you've found yourself saying to her: 'Remember when we saw that kinetic sculpture together?'.

I find myself wondering about the possibility of whether there could've been anyone else among the 'audience' who had been there the year before as well. Wouldn't that be something.

Back in 1968, I was on holiday in Largs and went into a newsagent's to buy a comic. I was struck by how similar it was in its layout to a newsagent's back home, which might explain why it stuck in my memory. The point of this story 'though, is that a year later ('69) when we were again in Largs, I went back into the newsagent's and the sudden memory of having been in the year before was so strong that it seemed to me I had only been in the previous day. I think when a pattern is repeated in a familiar place, whatever length of time lies in between the two events, the mind jumps immediately back to the previous occasion, forgetting (for the moment) the intervening period. (I hope that makes sense.)