"Hey, whaddya mean, 'Favourite Comics of the Future'? Are you on drugs or something?" you may be asking.  Well, it's just that I never knew about this comic until a few days ago, and as it's the next ish in line to SUB-MARINER King-Size Special #1, which I bought way back in 1972 or '73, I simply had to have it!  With no previous memories of - or associations with - the above mag, I can hardly claim it as a 'Favourite Comic of the Past', but no doubt it'll become a favourite in the future, hence the title.

Although the previous ish had been a 68 page Special, this one comprises only 52 (including covers) so it doesn't qualify as 'King-Size'.  I would've thought another Subby story could've been included, along with some pin-ups to round off the mag to 68 pages, so why MARVEL didn't do this is a bit of a mystery.  Anyway, as I said in my 'teaser' post to this one a few days back, it's nice to finally add the second issue to my collection alongside its predecessor, 43-44 years after the event.

The '70s, of course, is when I bought my original copy of #1, but I never retained it long-term.  I acquired a replacement for it in the very early '80s, then replaced that with a better condition copy a little while later.  So, in the interests of accuracy, the gap between buying my current copy of #1 and #2 is actually approximately 33-34 years, but that's still a very long time.  Not that any of that will matter to you one whit, but I always like to be as precise as I possibly can.

Anyway, congratulations!  You managed to wade through my weary waffle and have therefore earned the right to savour the iconic images laid before you.  If you cheated and jumped straight to the pretty pics, then shame on you.  Turn in your F.O.O.M. membership card on the way out.

(I've just remembered that this mag come out around the same time Marvel increased their regular line to 52 pages and upped the price from 15 to 25 cents.  The Bullpen maybe thought that the readers might wonder why some 25 cent mags had 68 pages while most others had only 52 and decide they were being ripped-off.  Of course, Marvel could simply have pointed out that reprint comics were less expensive to produce as the stories had already been paid for and therefore more pages could be allocated to them, but probably wanted to avoid any controversy.  As it turned out, the point was moot, as the 52 page regular line lasted only for one issue before reverting to 36, at a  new price of 20 cents.) 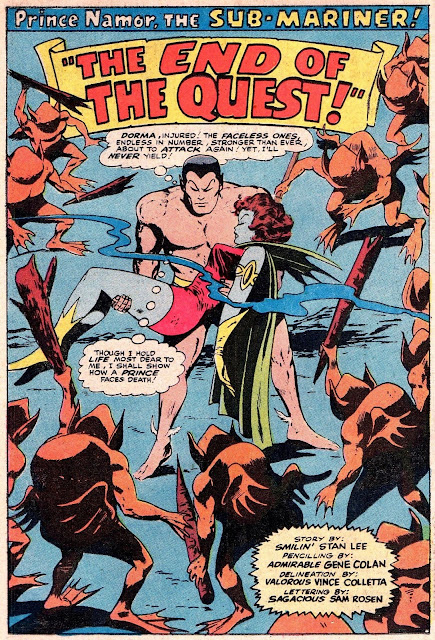 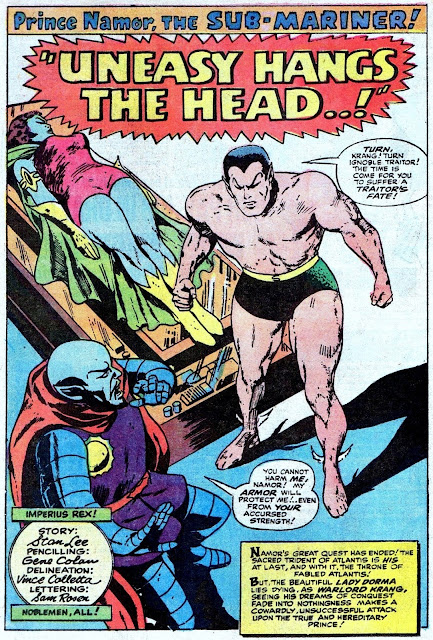 BONUS:  A close-up of the cover art - just for you! 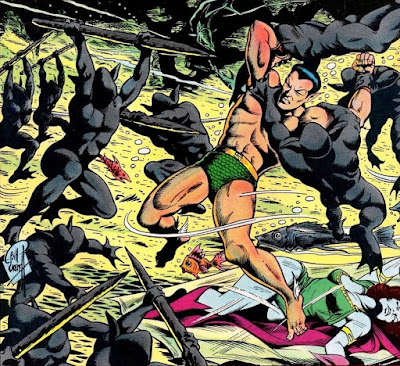 Just compared the pages to the version in the Masterworks Sub-Mariner vol 1 to see completely different colouring - and much better reproduction of the linework. Vince Colletta's fine inking style did not always reproduce well with the printing and paper stock used back in the day, which may have contributed to the less than high reguard some fans have for his work. Myself included if I'm honest, and I always try to be. It is hard to get your head around the time that has passed when thinking about the initial purchase dates of some of these issues - I (carefully) took my first ever Silver Surfer purchase (no. 5) out of its bag for a thumb-through the other day and in my mind it was as though I'd only picked it up yesterday - and not back in the early 70s!! Does that mean comics keep us young?, in the mind if not the body.

The very first printing of the Sub-Mariner Masterworks had a few problems, PC, with the line-work still not perfect ('though better than usual) and the covers being reproduced too small. However, the 'back-to-print' edition was better, I believe, with covers the same size as other volumes of Masterworks. Colletta's inking style reproduced okay in the first printings of the original mags, it was mainly '70s reprints of his work that failed to deliver. And comics certainly keep us young in the mind, while (ironically) reminding us of how old our bodies are becoming. And as you mentioned the Silver Surfer, I just have to take the opportunity to boast that I've got all 18 issues. Love 'em!

The three Sub-Mariner Masterwork volumes I have are vol 1 (Pb, 2011), vol 3 (HC, 2009) and vol 4 (HC, 2011). Print quality in all look fine to my eye. Have you seen the insane prices being asked for Masterworks volumes on eBay?!, even for the paperbacks. Since they seem to have stopped printing them and gone over to the Epic line people are seeing dollar signs in front of their eyes if they have any to sell. Glad I bought as many as I did when I did. I do envy you the complete run of the Surfer, I'd probably boast too if I had 'em all. Looking forward to (and wondering if it will ever appear!) the Epic edition that collects all 18. Though I have the two volumes of the Masterworks the first is a Barnes and Noble edition and I am not crazy about the way it is coloured or the shiny paper stock. The paperback SS vol 2 is more satisfying in the repro dept.

I have the first two Subby Masterworks, but 'though the line-work in Vol 1 looks okay to me, I think it's better in Vol 2. I also have the original Masterworks printings of Silver Surfer, and there's some obvious (and inferior) retouching in places. The 'back-to-print' editions (and the Omnibus volume) were a lot better. That's the good thing about the Epic Collections - the paper isn't that horrible shiny stuff.