PORTALS TO THE PAST... 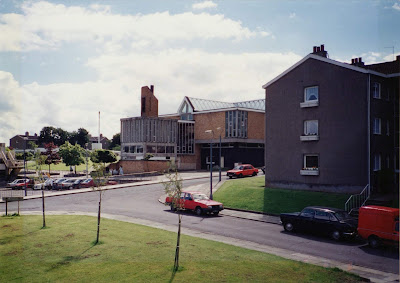 On the wall of my downstairs hall are two framed photographs, one either side of the front door.  The one below is the view (or part of it) from my back bedroom window of my family's previous house, the one above is a section of the view from what was my parents' front bedroom.  Thing is, they weren't taken when we actually lived in the house, but 16 years after we'd flitted from it.  What's more, 11 years after flitting, we flitted again - then, four years later, returned to the house we'd flitted to the first time.  (I really hope that makes some kind of sense to everyone.  If it helps, there are three houses involved in the above account.)

A year and a day after returning to the second house, I returned (by arrangement) to the first to take some photographs, both inside and out, because the view from my old bedroom (which I'd shared with my brother) was due to change forever.  Y'see, amenity houses for the elderly were about to be built on part of the playing field on the other side of the street, and I felt a strange compulsion to capture things as they were before it was too late.  Over the intervening years since, other alterations have occurred, so that the views from either window are today no longer exactly the same as what once met my gaze whenever I looked out of them.

(A little aside here: I find it interesting to consider that when I look at these two pictures, I'm looking at scenes that now no longer exist, and that the present tenants/owners of my former house don't see [and have never known] whenever they look out of either window.  Would they care?  I doubt it, but I believe I lived there when the neighbourhood was at its finest, and those who stay there now, without ever realising it, have to settle for second-best.) 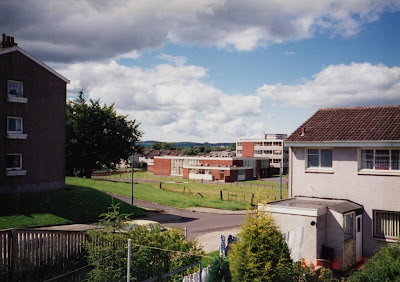 Anyway, it's comforting to me that the views familiar to me as a kid are preserved in their former glory, and that I can revisit them as they were (more or less) whenever I want to.  Sometimes I'll stop in the hall before going upstairs and just look at the photos, and I'm returned in memory to the house, and reminded of many of the things I once owned when I lived there.  Comics like WHAM!, SMASH!, POW!, FANTASTIC, TERRIFIC, WHIZZER & CHIPS, THUNDER, JET, SUPER DC - and many, many more.  Toys, such as ACTION MAN, TOMMY GUNN, CAPTAIN SCARLET, AURORA and AIRFIX plastic model kits, DINKY, CORGI and MATCHBOX diecast vehicles, and all sorts of other goodies.

I could extend the above list of things (including records, TV shows, etc.,) I associate with that particular house, but I'll spare you the details lest this post becomes even more tediously self-indulgent.  Suffice to say that there's a plethora of memories which arise to the surface whenever I look at these two photographs, and I'm really glad that I made a point of returning to the house to take them.  In my mind, the past is always with me, but sometimes the images appear indistinct, as though viewed through the bottom of a milk bottle.  Thank goodness for cameras, which can preserve our past in crystal clarity and ensure that we'll never forget it on our journey through the present and into the future.

Do you have any specific photos that you cherish, whether of people or places, which return you to an earlier time and that you'd never part with?  What's their sig-nificance, and have you taken any steps to ensure their safety and survival so that they at least last the duration of your lifespan?  Feel free to share in our comments section.
Posted by Kid at Monday, January 13, 2020

I've got a lot of photos from childhood but among my faves are a couple of full class photos from my infants and junior schools. It blows my mind that my hot dolly-bird teacher in the infants one would have to be 70 now, assuming she's still alive...

I don't have enough photos from childhood, sadly, and wish that my parents had taken more. I have three 'official' school photos of myself as a pupil, two taken in my two primary schools (one in each school) and one from secondary, but the only class photo I'm in was taken by a departing primary school teacher in the playground outside the huts. (She gave or sold us all copies, can't quite remember which.) Back in the '80s or early '90s, an old classmate gave me two or three class photos, none of which I'm in (two were taken just before I started that particular school, and I must have been off sick on the day the third one was taken), but I'm glad to have them as all my old classmates are in them, some of whom are now dead.