BARRY PEARL'S TWO OF A KIND...

A little bit of fun here.

This really began in 1961 when the Fantastic Four came out.  Everyone thought they were a 'clone' of the Justice league, but I thought they were a clone of the Legion of Super-Heroes. There was the Invisible Girl versus the Invisible Boy; Elastic Lad versus Mr. Fantastic and the Human Torch versus Sun Boy!  (In 1961 I had no idea that there had once been another Torch).

Not knowing Captain Marvel, I saw Thor as being similar to Green Lantern. They both had to be worthy to get their powers, they both had time limits, and they both answered to a higher authority, off the Earth.

So here are some Marvel based copies/clones/swipes etc.  Can you name them? (Yeah, I know that Sub-Mariner made his debut before Aquaman, but humour me a little.) 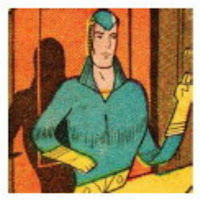 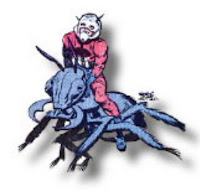 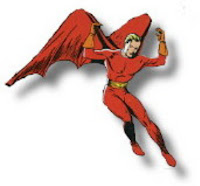 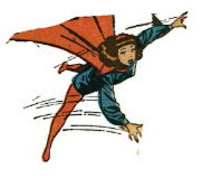 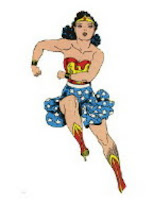 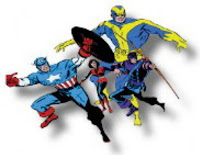 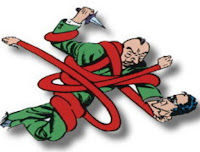 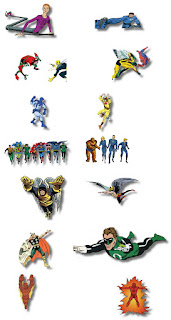 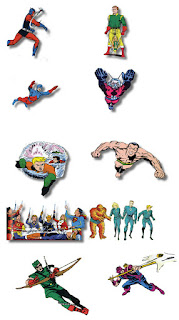 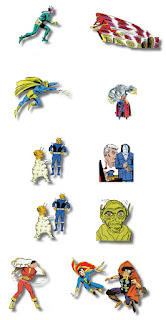 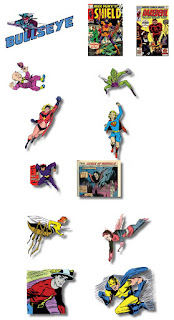 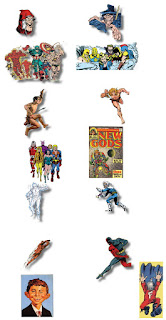 The Fly predates Spider-Man, and the Shield not only predates Captain America, but may have been the first patriotic-themed (that is, with a stars-and-stripes costume) comic book hero.

Plastic Man, AFAIK, was the first superhero with stretching powers, and so was a forerunner of Elastic Lad, Elongated Man, and Mr. Fantastic. DC acquired PM, Blackhawk, and several other characters when Quality Comics went out of business ca. 1950.

The Squadron Supreme was an obvious parody of DC's Justice League, and Marvel's Invaders were basically a revival of the All-Winners Squad, which had been Timely's (1940s Marvel Comics) answer to DC/AA's Justice Society.

It's well known that the Fantastic Four were created because Marvel wanted something similar to the Justice League. At the time, though, Marvel was not publishing any super-hero series, so Stan had to start from scratch. By 1963, though, Marvel had enough super-heroes (Iron Man, Thor, Hulk, Ant-Man, and the Wasp) to team them up as the Avengers, which was the kind of thing that Martin Goodman had in mind in the first place.

With the 1960s (Ted Kord) Blue Beetle, I always suspected that Charlton asked Steve Ditko to do something as similar as possible to Spider-Man, short of provoking a lawsuit.

The X-Men were suspiciously similar to the Doom Patrol, but the two came out less than six months apart, so it would have been hard for Marvel to create and publish their copy (if that's what it was) so soon. And the Doom Patrol was never one of DC's best sellers, so it is not clear why Marvel would want to copy their competitor's B-list, anyway.

It's also been suggested that the Doom Patrol had similarities to the Fantastic Four. And that the FF resembled DC's Challengers of the Unknown. And so it goes.

I've never been convinced about the alleged similarities between the FF and the Challengers, TC. Apart from there being four members, the Challs don't even have super powers (though one of them gained temporary ones in a story). And though both teams survived a crash, the plane on which the Challs were travelling was totalled, whereas the FF's spaceship wasn't. I'd say any alleged similarities were extremely superficial. It's said that Jack didn't like working on other people's characters, so it's extremely likely that the idea to use a revised Human Torch was either Martin Goodman's or Stan's - it doesn't seem like the sort of thing Jack would suggest himself.

I suppose we could say that Superman set the pattern - almost every superpowered superhero after him was derivative to some extent.

The Phantom may have been the first comic strip hero to wear a spandex-type costume.

Billy Batson was judged worthy to inherit the Captain Marvel powers, and he sort of answered to the authority of Shazam.

Forbush Man became Marvel's mascot, like Alfred E. Neuman was for Mad. His costume resembled the original Red Tornado, who had been an honorary member (and comedy relief) in the Justice Society in the 1940s.

I know that Jerry Siegel took exception to Jim Steranko claiming (in one of his History of Comics volumes) that The Phantom's costume influenced Superman's. That's because, although The Phantom was first into print, Superman was created before him.

As you'll know, TC, Supes is also supposed to have been inspired by Philip Wylie's Gladiator. I seem to remember Jerry Siegel denying this, but I think he actually reviewed it in one of his fanzines. One thing's for sure though - Siegel's comparison of Superman's muscular strength to that of grasshoppers and ants is first found in Wylie's novel.

I never intended the post to imply Marvel came first second or third. What I tried to show is that several companies had similar characters and one in different directions with them. Plastic man for example, was not the first stretchable character. The Thin Man was. But I did not intend to get into a discussion of who came first. I just wanted to show the similarities between the characters. I actually thought that would be fun.

And it IS fun, Barry, and I'm sure TC (and anyone else) knows what your intention was. (Although using the word 'swipes' tends to suggest a 'who came first' approach, we knew that wasn't the point you were making.) TC's merely taking the opportunity to add to the subject by expanding the scope of your post. In short, HE's having fun too. I think you might be interpreting his comment in the same way you seem to think he's interpreting your post - too seriously. See, that's the good thing about your guest posts - it inspires people to think even further beyond what you intended. That's what I call a result!

Well, I never intended to start an argument, or to make a big deal over whether the X-Men or Doom Patrol came first, or to suggest that Marvel swiped from DC, or that Charlton stole from Marvel, or whatever. Just, as you say, adding to the subject and expanding the scope a little.

Also, similarities do not necessarily prove intentional plagiarism. Given the vast number of stories and characters over the years, there was bound to be some overlapping. For example, Superman and the Hulk both had superhuman strength, but that's common enough in heroic fiction. It predates comics, going back to ancient mythology, folklore, and religion (Samson, Hercules).

Some academics have even suggested that there are only seven (or four, or five) basic plots in all of fiction.

And The Eternals and New Gods were similar because they were by the same creator, who was apparently interested in the Ancient Astronauts theory.

I didn't know that the Thin Man came before Plastic Man. Live and learn.

I know you didn't and weren't, TC. I've been in a similar position many a time, where I've enjoyed a post and, in my eager desire to comment but not being quite sure what to say (not that I'm saying YOU weren't), said something beyond what the post's writer was looking for by way of response. Barry has been unfairly targetted by a couple of over-eager 'critics' in the past for things he's written on another site, and perhaps (mistakenly) interpreted your reply as 'taking him to task' over something he knew he wasn't trying to say. I'm sure he now appreciates that you were only trying to be helpful to other readers by adding some relevant details.