HERE'S A SMASHING 'MYSTERY' FOR YOU TO TRY AND EXPLAIN...

Just for fun, here's a little mystery for you to work out.  It's not a mystery to me 'cos I know the answer, but let's see if you can explain it.  I own two copies of the above SMASH! Annual for 1975 (issued in '74), which was the second-last one for the comic that had been merged into VALIANT in 1971.  Below are two versions of three panels from inside the book, one from each of my two copies.

Forget the variation in the spot colour - that's simply down to the vagaries of printing and is quite common.  As you can see though, the first panel in each row is slightly different.  Can you come up with a possible explanation for it?  Put your thinking caps on, Criv-ites, and give it a go! 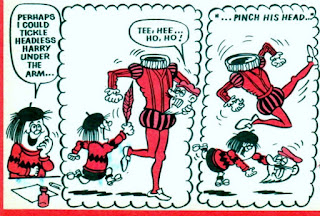 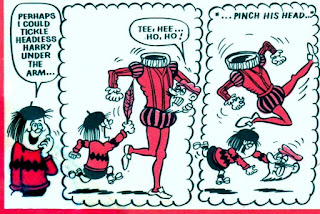 And now - the answer:  But first, this post has had a good many hits, but only two comments.  Surely imagination isn't as rare as all that?

Anyway, the answer is simple, as all answers are when you know them.  The first Annual I bought was price-clipped, which meant the strip on the other side of the page had a bit missing.  It wasn't even a neat diagonal cut, but rather, as the price had been enclosed in a circle, it was almost a square (with a round edge) that was missing.

I added a patch, but as I didn't know what the missing piece of art looked like (not yet having bought my second copy), I just drew what I thought it might look like.  I 'cheated' a little for this post by upping the contrast so that the join wasn't visible, but if I'd left it in, it would've been pointless asking the question.  (Whaddya mean you want a refund?)
Posted by Kid at Sunday, August 25, 2019

No idea but interested. Can only think of one being a second printing (unlikely though for an annual)

Actually, PM, most Fleetway Annuals had a 2nd printing, in that once they'd been printed for the home market, the year was removed from the cover for the ones shipped abroad. That's not the reason in this case though.

In my opinion there are two bigger mysteries:

1) Who are the people in the balloon and why is one of them wearing a crown?

2) Why do you have two copies and did you know about the differences in the panels when you bought the second copy? - is that the reason why you bought a second copy?

Your first mystery wouldn't be a mystery if you were a Smash! reader back in the day, CJ - it's Henry Nobbins, otherwise known as His Sporting Lordship. The guy beside him is his butler, and his chauffeur is down below. The others are just bystanders, I presume.

The answer to the post is in the explanation of your second mystery, so I can't tell you that quite yet.

That was a great post Kid, and got me thinking about it overnight...you shoulda kept us in suspense a while longer! My theories were a) one was an editor's advance copy for proofreading (I dunno if they actually exist, but I could understand you buying a second copy if it was a file copy) - and b) the change was so odd and pointless that I thought it may have been altered for some continuity error - just shows how we can read too much into these things, eh?

Funnily enough, HS, this post has had more visits than any other in the last week, but only two responses up until I revealed the answer - so I thought it was one that had intrigued readers by the title, but disappointed them with the content. That's why I wrapped it up.

Publishers' advance copies for books do exist (as you'll know working in a library), but I don't know if that extends to Annuals. I suppose some kind of a advance proofs must exist for editors to check for errors, but probably just in loose sheets, not actual bound copies. Imaginative guesses though.

I couldn't really imagine an editor being so pedantic as to spot a small art error too late in a test printing and go to all the effort of changing it for the actual published copies - but, then again, I couldn't think of any other explanation. The actual answer was unguessable as anyone would assume from the teaser that 2 versions were printed for some reason. The actual answer is a relief in a way, 'cos the idea of you comparing duplicate copies frame by frame is just too weird! :)

Also weird was the fact that I rushed to my bookcase to see which 'edition' I had and found that I had neither! I know I definitely did own that annual once, but now I just have 1973 & 1974...dunno what happened there!

Did you receive my reply about Robert Laurie over on the Paynter posts? you didn't respond so I wasn't sure if it sent through OK?

I didn't receive that reply, HS - there was no email alert to its arrival. I'll go and check. By the way, I've seen editors go over proof sheets (unfolded 4 page [I think] sheets) with a magnifying glass or eyepiece, looking for mistakes before giving the printer the okay. Or am I imagining things? It gets harder to tell these days.

Just checked, HS, there's no message there, so there must've been a glitch at the sending stage.

Incidentally, HS, I've got spare '75 and '76 Smash! Annuals. If you want them, you can have them if you pay the postage.

I thought it might have been an in house thing between fellow artists. Leo Baxendale may have had some message to fellow scribes that meant something.. It isn't something Honest Citizen would pick up unless he was in the know.

Except that this Bad Penny strip wasn't drawn by Leo Baxendale, LH. And IPC wouldn't have paid to produce two different printings just to accommodate the artist in such a way. Imaginative thinking though.