PRESENTING: THE DISPLAY CABINET OF DR. CALIGORDIE (BE CHARITABLE NOW)... 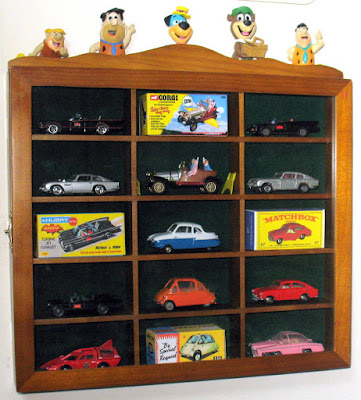 Take a look at my new display cabinet housing some of my collection of diecast vehicles.  I say 'new', but it's actually secondhand, purchased from a charity shop.  It had lain unsold for months, probably on account of its £12 asking price, which is quite expensive when compared to wall-size bookcases going for £20 in the same place.  I asked them if they'd accept a tenner (no haggling, just a straight question) and they did, but upon arriving home, I discovered a few imperfections.

Firstly, the back was coming away, no doubt as a result of cars too wide for the compartments being placed inside and then having the door forced shut.  I remedied that with an upholsterer's staple-gun to secure it back into position.  Secondly, under the price label on one of the corners, was a missing piece of veneer, which I had to disguise with a furniture pen, then varnish over.  I checked, and there was no veneer under the label, so it hadn't come off when I removed the price.

Thirdly, there were little nicks in various places, which I again had to disguise with my furniture pen.  Also, the original price labels from when the item was brand-new (before it had been used then donated to charity) were still on the box, which I hadn't previously noticed.  It had started at £15, then been reduced to £9.99, then reduced again to £7.50, which is the price the original owner had paid.  I'd paid £2.50 more than when it was new and then had to spend time and effort making it presentable.

In reality, considering its condition, it really wasn't worth more than about a fiver, but at least I managed to tart it up, and its aged and worn appearance is now no longer obvious.  And, more importantly, don't my toy cars classic collectable diecast model vehicles look great in their 'new' home?  (Which is where charity should begin, isn't it?  At least it ended there.)
Posted by Kid at Friday, August 30, 2019