BILLY BUNTER first appeared in text story form in The MAGNET in 1908, but it wasn't until 1940 that he became a comic strip character in KNOCKOUT comic, drawn for the first nine episodes by C. H. CHAPMAN, who'd been the last artist to illustrate the Magnet stories.  After a few other artists had been tried, FRANK MINNITT drew the strip until his death in 1958.  REG PARLETT then took over the artistic reins, continuing after Knockout was merged into VALIANT in 1961.

The strip appeared in Valiant for many years, even after it subsumed SMASH! and then TV21, but I'm unsure whether they were new stories or only reprints.  The last comic I remember seeing Bunter in was either WHIZZER & CHIPS or BUSTER - or maybe even both, as they were merged in 1990.  The strip you see here is from the 1971 VALIANT & SMASH! Summer Special, but it may well have been a reprint, though originally it was probably published in b&w, not colour.

Incidentally, clock the monkey waving goodbye from the back of the van in the final panel.  Reg Parlett never skimped on extra little humorous details like this. 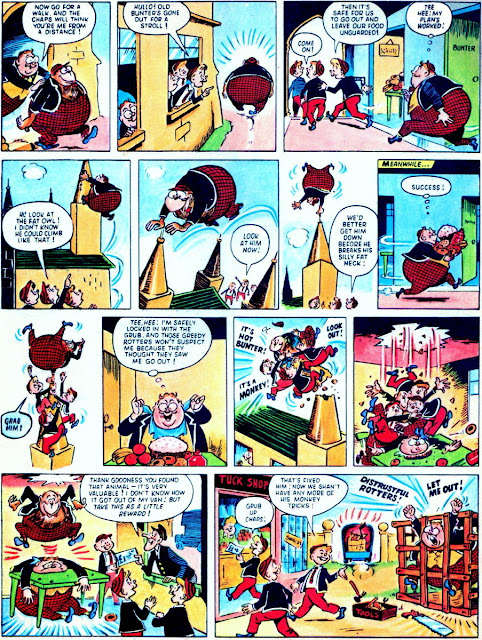 This is a fantastic strip, so thanks for sharing it! I really envy you your collection, these IPC holiday/summer specials are hard to come by. The colouring's pretty good too and as a kid you wouldn't guess that it's reprinted from a B&W strip. I only kept a few Christmas issues of Valiant but I re-read them every year and the Bunter strips never get boring - I dunno if they were reprints, but I love the unnecessary detail that shows the artist was enjoying it too! I'm a bit surprised you remember seeing Bunter in Buster or W&C? I thought he'd been retired with the demise of Valiant and it's annuals/specials. I wasn't buying the IPC funnies at the end of their runs so I guess they could've been reprinting anything, but these seemed a bit old-fashioned even in the Valiant (not a criticism)...

Well, there's always a chance I'm misremembering, HS, but I'm pretty sure Bunter appeared in one or both of those two titles sometime in the late '90s, early '00s. (I have a vague idea that he might have appeared in Eagle Monthly too, but perhaps I'm hallucinating now.) Reg Parlett was a brilliant cartoonist - everything he drew just looked so funny. As for the colour, there's always a chance that the strip was originally coloured for an earlier Valiant Summer Special first, and that the V&S Special merely reprinted it.

I always liked Billy Bunter, perhaps because I was in school and could appreciate his antics! I always felt he was a nostalgic character though because yes even though we had uniforms, one felt as if Billy was somehow still stuck in a 30s Ronald Coleman movie.

When I was a kid, I never really thought about how dated either Bunter or Winker Watson (from The Dandy) might seem to 'modern' kids, probably because I just assumed that was the way pupils and teachers dressed at public (live-in) schools. I knew that it was a different world to the one I lived in, but I also knew from reading Jennings books and seeing old Will Hay movies that it existed. And when I started Secondary school at the age of 11, some teachers wore the cloaks that Winker Watson's teachers sported, so Bunter and Watson seemed less 'out-of-sync'.

However, what swung it for me with Bunter was the humorous Reg Parlett art. Never drew an inferior strip in his life. Everything he drew just looked so darn funny.