DEPARTMENT OF MODESTY - HOW IT SHOULD'VE BEEN DONE...

I've published a couple of posts about this cover before, but I'm so proud of the work I did (for my own amusement - and yours too, of course) to 'improve' it, that I thought I'd feature it again.  After all, there may be some of you who've never seen the previous posts. As you can see above, that's the cover of JOURNEY Into MYSTERY #83 as it was published back in 1962. However, it's not as JACK KIRBY (inked by JOE SINNOTT) originally drew it.  No, he had quite a few more STONE MEN From SATURN in the background.  That's a production stat of his initial version below. 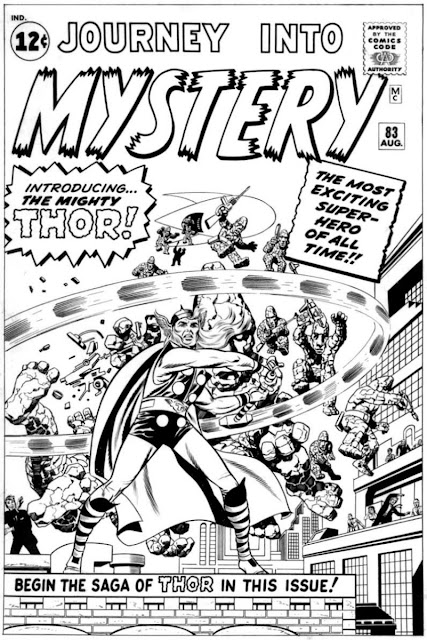 Obviously, STAN LEE thought that there were too many of them, resulting in the background being 'too busy' and diminishing the impact of Thor as the central figure, so he had some of them removed before the cover was coloured and published. However, I always felt that more than were necessary were deleted, leaving the picture somewhat open and bare, and detracting from the sense of threat that the Stone Men posed.  Therefore, utilising the production stat above, I removed fewer of them, which, I believe, preserves the appearance of Thor being deluged by possibly overwhelming hordes, while still being the main focus of the composition. 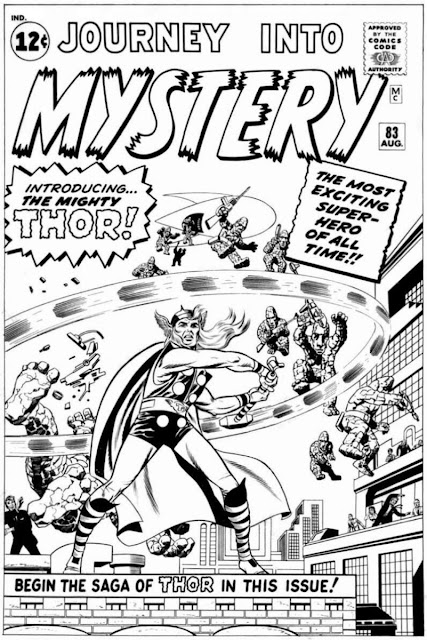 What do the rest of you think, assuming that you even care?  One day I'll maybe get around to colouring it, but it won't be anytime soon.

Yours is better. The original cover does look rather empty compared to Kirby's original design.

Now that's what I like, CJ - a perceptive Criv-ite such as yourself.