DC COMICS have just released this great collected edition of all 15 issues of JACK KIRBY's run on SUPERMAN'S PAL JIMMY OLSEN.  These stories were previously available in FOURTH WORLD OMNIBUS editions, as well as two separate JO volumes published back in 2003 and 2004.  Unfortunately, some mistakes have still not been corrected, the first being a missing line (The Origin of the first Newsboy Legion!, plus the number and date) from the cover of #141, the second being Superman sporting a MIKE ROYER corrected face on the cover of #146, instead of the MURPHY ANDERSON one that graced the published issue.

Also, the inking of #145's cover was mistakenly credited to VINCE COL-LETTA (instead of Murphy Anderson) in the 2004 book, and at first I thought they'd avoided the error this time around by not specifying which artists inked which covers, but I was wrong;  they've simply moved the credits from the cover pages themselves to the contents pages, where the mistake remains.

However, your genial and well-loved, greatly admired and immensely respected host (that's me) has no hesitation in saying that these issues were the best thing Jack produced at DC in the sizzling '70s and undoubtedly deserve to adorn every serious collector's bookcase, so you should run out and purchase one right away.  Previous volumes in this series of softcovers have included intros from earlier editions, but this one breaks with tradition and MARK EVANIER's introductions to the two separate volumes are absent.  Also, the bonus pages featuring stats of Jack's pencils are different to the ones included in the 2004 book, but there are six compared to the former's three.

So why are you still here?  Get out and buy one!

(P.S.  For some reason, my scanner isn't reproducing the front and rear covers' background colour properly.  That pinkish colour should be orange.) 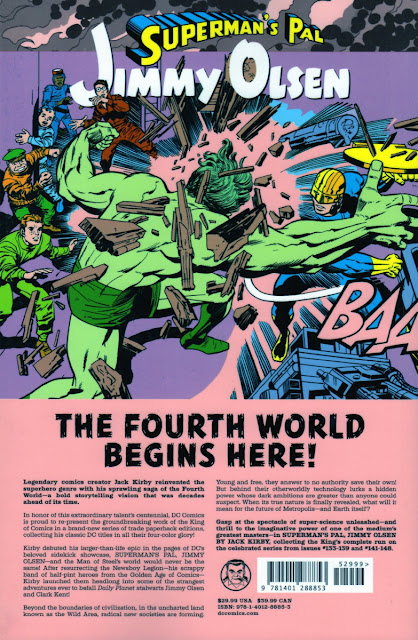 Hmmm. I like Kamandi and The Demon. Mister Miracle . New Gods. Jimmy Olsen. Then Forever People. Jimmy I just don’t understand a lot of it. I got the famous Don Rickles issue and I just didn’t get what Kirby was trying to do. I’m still not sure . But thank goodness they redid Superman’s face. Seeing Murphy Anderson on top of Kirby - ugh it was some sort of Frankenstein monster and not in a good way. And I love them both as artists! But it was like Picasso’s Nude descending a Staircase then putting a Raphael head on it. Nightmare shivers .

I 'got' it fine even as a 13 year-old, PS, I don't think there was anything hard to understand about it. Kirby's Olsen issues were better than what had gone before and what came after - it's just a shame he didn't do more of them. I also liked Anderson's inking on Jack's Supes and Olsen faces. If you see the original pencils (well, stats of them), the real 'Frankenstein' was the way Jack drew them. Supes' parting is always switching sides, and his hair looks like a bad comb-over in some panels and a dodgy 'syrup' in others. What DC should've done of course, is to have Anderson ink the complete issues, not just some faces. Having said that, I do like Vinnie's inks - just a shame he couldn't have 'fixed' the faces himself.

I enjoyed what issues I was able to track down back in the day.....our distribution system in my neck of the woods was a bit erratic. Unlike many folks, my first exposure to Kirby was via his DC tenure.....I found out about Marvel later through reprints. I enjoyed the Jimmy Olson run (and Colletta's inks) much more than any other Jimmy Olson stories, but was partial to Mister Miracle and Kamandi.

Never thought about Murphy Anderson inking the entire issue, but that would have probably been something to see.

Distribution in Scotland was spotty too, sometimes. I think Kirby had already departed Olsen by the time the issues turned up in Scotland. I didn't even always get them in sequential order, just bought 'em whenever they went on sale in the shops. Olsen was my favourite Kirby DC mag, probably because of Superman.

My conversion to Kirby took a while, not overly fond of his style on first exposure to it but then really connecting with his larger than life dynamic, my favorite period being his '65 - '70 Fantastic Four. Never knew about his DC work until years later. Back in the day I was rather fickle in that I tended to follow artists around from title to title rather than sticking with characters no matter who drew them. So I have a lot of issues from different series featuring various characters as long as they were drawn by John Buscema, Neal Adams, Gene Colan and a few others. Superman is such an iconic and well know character but some artists seem to struggle with the look, Jack clearly being one of them. I wouldn't imagine that he would have been happy with the re-working of his art after he submitted it. Same thing happened to the Hulk with Steranko / Severin, Kirby and Trimpe exchanges of faces on some covers and posters.

According to Mark Evanier, his assistant at the time, Jack indeed wasn't happy with changes to his art, but tolerated it in 'the spirit of co-operation', PC. However, if it hadn't been for Evanier and Steve Sherman pointing changes out to him, he probably would't even have noticed, as he tended not to look at the comics he worked on once they'd been published. I can see DC's point of view though, as Jack drew Superman's 'S' emblem like Alex Ross did in 'Kingdom Come' and it was too drastically different at that time (the '70s) to leave it like that. Also, Superman's hair looked different in almost every panel. I think DC went too far in a couple of issues (Forever People #1 being one of them), where they had Al Plastino completely redraw Jack's Superman from head to toe, but they had to do something. What they should've done was 'fixed' the 'S' and the hair, but left the face and figure as they were. Having said that however, I didn't really mind Murphy Anderson inking Supes' and Olsen's faces and bringing them into line.

Also, meant to say, Marvel did it as well, often having John Romita ink Jack's Peter Parker and Mary Jane faces to make them 'on-model' in cameo appearances in FF, and Jack often redrew (at Stan's direction) panels by Don Heck, so he did what others did to him - did it first in fact. There was talk a few years ago of Steve Rude redrawing the retouched faces in Olsen to more resemble what Jack had drawn, but it never happened.