A whopping 36 years ago, in the month of April, MARVEL UK released two new comics a week apart - The MIGHTY THOR and The ORIGINAL X-MEN.  The latter lasted for a mere 17 issues before being merged with the former, and the combined title lasted for only another 21 issues (if my arithmetic is up to scratch) before finally biting the dust.  It's a shame that there wasn't a third comic starring IRON MAN, because then they could've merged all three periodicals and re-created FANTASTIC, which had featured all three titles back in the '60s.  There are complete cover galleries of Thor, X-Men, and Fantastic on the blog just waiting for a visit from you, so feel free to search them out, frantic ones. 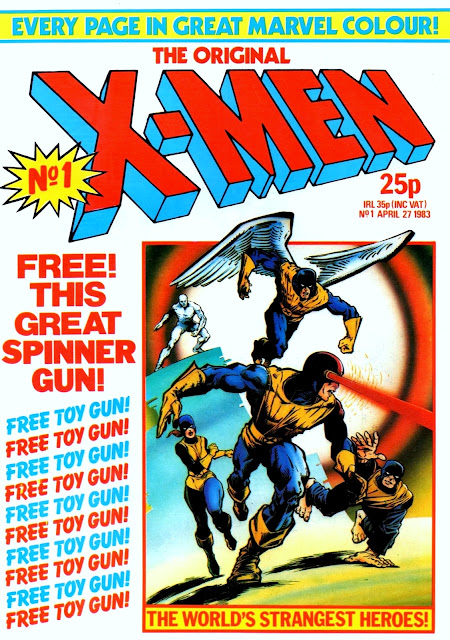 Free toy gun eh? Do you still have it?

Yup! A FLAT toy gun if I remember rightly. It's in a shoe box somewhere.

I'd totally abandoned Marvel UK sometime around early 1981 in favour of the American imports so I have no knowledge of these weeklies at all. In my opinion Marvel UK's golden age ended in January 1979 with the final issues of MWOM and Super Spider-Man.

I'd say they probably ended sooner than that, CJ. Once the colour pages disappeared and the heavy Zipatone started to dominate, the comics looked terrible. They made a short revival once Marvel sorted out those difficulties, but I'd say their golden age ended around 1977.

Funny how we all perceive time differently- I remember finding some copies of the UK Thor comic in a second hand bookshop aground 1987 and thinking they were ancient relics from long ago! Four years to me back then seemed an eternity, now it feels like a few months ago!

I don't know what age you are, DS, but let's assume you were 16 back in 1987, which would make 4 years a quarter of your life at that time. Nowadays, of course, if you're 48, 4 years seems like nothing because it's a smaller proportion of your life. That's how I see it anyway.

I was 12 in 1987 so it was a whole third of my life! Similarly, I clearly remember seeing a bank issue of the Beano which had a cover price of 8p and finding it mind-boggling that comics were ever less than what the current price at the time was ( which I think was about 12p- how times have changed! )

Funny how comics sold more when they were cheaper, eh? That's maybe something publishers should bear in mind as circulation declines. To think that The Beano now costs more than half a fiver - wow!