The AMAZING SPIDER-MAN #252 - purchased (much to my apt amazement) a staggering 35 years ago.  It just doesn't feel like it, seeming more like only a few weeks back rather than the inordinate length of time it actually is.  That was more than half my life away, and I have immense difficulty getting my head around the fact that I've got to where I am now without being fully aware of the duration of the journey.

Anyway, today I received the new facsimile edition of the exact same issue, which pressed the reset button for me and returned me to an earlier time in a different house in another neighbourhood.  I might not have a functioning TARDIS, but if I ever want to go back in time, I find that certain comics serve the very same purpose.

However, enough of my self-indulgent silliness.  As you'll know, the cover is a nod to Spidey's first appearance in AMAZING FANTASY #15, and it was probably the collectors' item of the moment back in 1984.  (Or would that have been SECRET WARS?  Really?  Never thought it was that great to be honest.)

Anyway, the original is above, the facsimile below, followed by both issues together so that you can have seconds of fun trying to spot the differences.  Forget the colour, as that's more likely to be down to different printing techniques and paper than variations in the colour palette utilised in their production.

So what was your opinion of the Web-Spinner's new black costume all those years ago?  Like it, loathe it, or didn't care one way or the other? 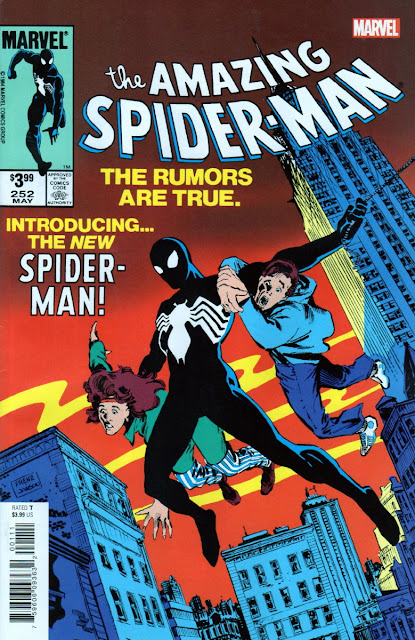 I stopped reading comics sometime around late 1983 (I eventually returned in 2007) but I remember hearing about Spidey's new black costume because it was on the BBC news or in the newspapers or something.

Well, CJ, now you can buy this issue and catch up with what you've missed. Return to 1984 as soon as you can.

I love the black costume, probably because that's what Spidey was wearing when I made the move from casual interest to dedicated comics reader. I'd have liked him to have kept wearing it a bit longer, although he was always going to back to the red-and-blue at some point - apparently Todd McFarlane agreed to draw Amazing Spider-Man on the condition Spidey would be in the red and blue costume.

Incidentally, Erik Larsen changed Spidey's outfit to red and black while he was drawing Amazing- a subtle change, but one that I didn't especially like.

Spidey's original colours were red and black back in Ditko's time, DS, the blue was just supposed to be 'highlights'. (The spider emblem on his back was originally blue, which it wouldn't have been if the costume was also meant to be blue.) Over time, however, Ditko left the costume more 'open', and it just sort of evolved into blue and red.