PART FIFTY-SIX OF FAVOURITE COMICS OF THE PAST - 'MURDER BY SPIDER'...

This isn't the first comic from the 1980s to grace the 'Favourite Comics of the Past' feature, but it still feels kind of strange as the '80s yet seem recent to me, whereas I tend to think of the 'past' as the '60s and '70s.  Nevertheless, it's been 37 years since I first bought this mag, so it surely qualifies - and it's a great little read into the bargain.  I just re-read it again only half an hour ago, and it still stands up after all this time.  If you've got it in your collection, then dig it out and treat yourself to an atmospheric mystery, if not, get straight on to ebay and get yourself a copy of The AMAZING SPIDER-MAN #228.

Writer JAN STRNAD later complained about the way in which his script was edited and some sections of dialogue moved around (in an issue of The COMICS JOURNAL I think), but I don't think readers will be in any way disappointed in the story despite the writer's objections.  Just paste your peepers on that splash page (below) - doesn't it look great?!  I wish we'd seen more tales in this vein, as Spidey fits right into moody murder mysteries of this type.

Once again, this is the actual issue I purchased in 1982, not a replacement, and it's practically in the exact same condition as the day I got it - which is more than can be said for me.  I first read it in the same room I just re-read it half an hour or so ago, which serves my sense of significance in a way I can't quite explain (but you know me - I'll try).  Although I no doubt also re-read this ish in the house I lived in for four years between my two periods of residence in my current abode, it's good to repeat the experience where it began, if you know what I mean.

No?  Doesn't matter a jot, just enjoy these two great images from another century.  It would be nice if MARVEL did a facsimile edition of this issue, so here's hoping. 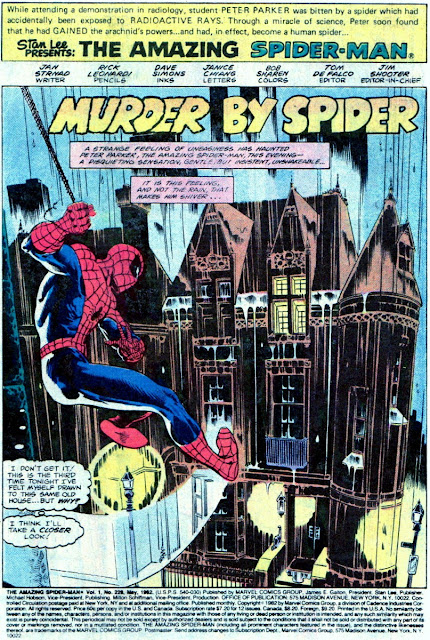 Nice inking on that splash page by Dave Simons - I have a Captain America annual which he inked over Gene Colan and don't think he quite suited Gene's pencils, but then many good inkers didn't mesh well with Colan's unique style.

Interesting that the 80s feels recent to you, Kid- I feel that it was a long time ago but yet comics from 1985 onward feel really fresh and new to me whenever I look at them. Another strange effect of the way we perceive time, I suppose.

Speaking of Marvel's great facsimile editions, they are doing one next month of Alpha Flight #1 - I re-read my copies of the first 6 issues a few days ago and absolutely loved them. Under-rated little series that became more convuluted and less casual-reader-friendly after John Byrne left, in my opinion.

I suppose it depends on my 'point of entry' to the '80s, memory-wise, DS. Sometimes it seems recent, other times it's like a million years ago. However, when I pick up a comic, my mind immediately flies back to when I bought it, making it seem much more recent than it is. I pre-ordered Alpha Flight a few weeks back, along with Howard the Duck. I've already got the originals of course, but I really love those facsimile editions.