BELATED THOUGHTS ON THE PASSING OF DEREK PIERSON... 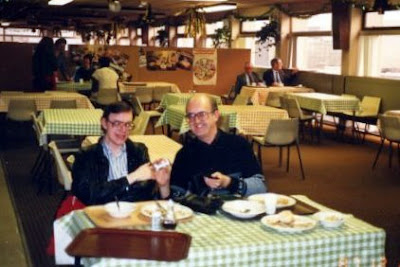 Back in the mid-'80s, I used to visit London once (sometimes twice) a week for around two years, for the purpose of collecting (and delivering) freelance work I was then doing for IPC Magazines, based at the time in King's Reach Tower in Stamford Street.  I had a desk on the 26th floor, next to one used by art assistant KEVIN BRIGHTON, and sometimes one of his pals who worked in the building would pop up to see him.

His pal was DEREK PIERSON, who I've just this moment learned died back in 2016, and though I didn't know Derek well, I'm still saddened by the news.  Kev, Del (as Kevin called him), and myself sometimes lunched in the IPC canteen, wherein the above photo (taken by myself) was snapped circa 1986.  It's not a great photo, but I have a better quality copy of it somewhere, and I'll add it to this post when I find it.

Derek (among many other things) was a 'resize' artist, who used to resize the MARVEL reprints in the Odhams POWER COMICS back in the '60s, something that Kevin also did with UK reprint strips in much later IPC publications, and I assume it was that shared background (in different decades) which formed the basis of their friendship.  Anyway, I just wanted to belatedly note Derek's passing, as my days down in London in the company of Kev and Del are still ones I think back fondly on.

Cheers, Derek.  (And if anyone can tell me what Kevin is up to these days, I'd appreciate it.)

Makes you wonder what kind of scumbag would tick a post about someone's demise as funny.  Where do these morons come from?
Posted by Kid at Thursday, April 18, 2019

Always sad to hear of anyone in the comics field passing away. Although I'm not familiar with Derek's name, chances are I've read a comic at some point that he was involved in, most likely in my childhood, and I appreciate all the work that so many uncredited people put in to bring so many of us such entertainment.

If you've ever read a copy of Wham!, Smash! or Pow!, then you'd have seen some of the strips he worked on, DS. There are probably many more than even I'm aware of. I think he was a letterer as well.