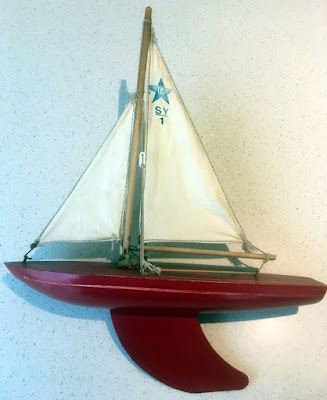 Take a look at the above red yacht - a SY1 yacht, made by STAR YACHTS of Birkenhead, who produced them (and other things) for nearly 70 years until they ceased trading around 1990.  I guess I got the yacht while holidaying in Rothesay in 1965 because I associate it with the house in which I was then living that year.  And I associate it with that house because, along with a water pistol, I swapped the yacht for a BUDGIE SUPERCAR with a boy who lived just around the corner.  However, I insisted on swapping back again about half-an-hour later when the bottom half of the Supercar separated from the top half, thus revealing itself as being not quite so 'super'.  (And no, I hadn't mishandled it - the bottom half just fell away.)

I got another yacht (same model) in 1968 or '69 while on holiday in Largs, and, back home, I remember keeping it in a red plastic pail in a cupboard under the stairs (access to which was in the kitchen) of our next house, and I think I may still have had my first one as well, as I have a vague hint of a memory of seeing them together.  Not 100% sure though.  I don't know (or don't remember) what happened to them, perhaps they were dispensed with during a parental clear-out when I was at school one day, because there came a time when they just weren't there.  I think there should be a law against parents throwing out or giving away their kids' toys without their consent, don't you agree? 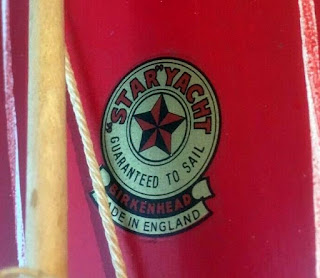 Anyway, I've recently managed to obtain three replacements for my two yachts of yesteryear, the first being for the Rothesay one, the second being for the Largs one, and the third being just for the hell of it.  (Never hurts to have a spare, does it?)  I remember being disappointed to see that the shallow boating ponds next to a swingpark in Largs, where I'd sailed my second yacht on the day I bought it back in the '60s, were no longer there when I revisited the place in 2014.  They'd either been turned into sand pits or grassed over, can't quite recall.  Anyway, did any of you Criv-ites ever have a Star yacht as a child, and do you have any specific memories of it that you'd care to share with the rest of us?  Go on, don't be shy.  Incidentally, I've used the photos of one of the sellers because I'm too lazy to take my own, but I may well replace them at a later date when I have more energy.

One more thing;  to someone my age, 1990 (when the factory ceased production) doesn't seem that long ago, even though it's nearly 30 years.  To think that a childhood toy was still being produced when I was an adult is something I find amazing, because the last time I saw either of my own two yachts would've been in the late '60s or very early '70s.  I don't even recall seeing the item on sale in any shops during my teens, but maybe that's only because I just wasn't looking for it.  I did see a second-hand one in an Edinburgh shop called 'Now and then Antiques' in 1991 when I was purchasing my CORGI BATMOBILE, but for some reason I didn't buy it, though I regretted not doing so very shortly after.  (It was only a tenner.)

Just on the point of parents throwing things out - they seem to come to the conclusion that you are now too old for particular items at some point unknown to us as children or teenagers, or maybe when children become teenagers, and just get rid of whatever item they feel you now can do without. No further correspondence entered into or permissions asked. Is there a parents' manual somewhere that we don't know about where this is deemed a mandatory process to carry out?, because if there is then they must have discontinued that publication - being a parent myself I've never seen it! So, here we are all grown up and thankful for eBay so that we can reclaim these items that departed from our lives without our permission.

At least a couple times in the past, PC, a reader has said in response to a post about a particular item that they still have theirs, but it's at their parents' house. My first thought is "Better get it quick then!", because there's no guarantee it still will be when next they visit their folks. Chances are it'll have either been binned or given to little cousin Hamish. Yes, ebay has been a blessing in so many ways. It's supplied me with so many replacements for childhood items, though made me poorer when it comes to dosh.

My parents never threw away anything of mine. They had respect for my property.

I think my parents wished they'd kept my property and thrown ME away, CJ. My father was always saying that the doctor had thrown the wrong bit away when I was born. I assumed he was kidding, but I was never quite sure.