A BENCH TOUCHED BY CLASS (UPDATED)...

Around three Sundays ago, I took a plod along to one of my old neighbourhoods to wallow in nostalgia for days long past, and, as is my wont, sat on a bench near a burn (a Scots word for watercourse, from a large stream to a small river) in which wild fowl sometimes swim.  Not that you can see them from the bench, but you can usually hear them, and if you stand on the edge of the burn and look down into it, you'll be rewarded by the sight of them doing nothing much at all.

Back in the '70s (as related in a prior post or two), I used to visit my town's hospital shop in search of ALAN CLASS titles, as it seemed to stock more of them than anywhere else, and on the way home, I would stop at the same bench to browse through my comic acquisitions and familiarize myself with their contents. Consequently, there are some covers that I automatically associate with that bench, burn and view, and the connection is unbreakable.


Three Sundays ago, however, something had changed.  The bench, which as far as I know was the same one that had occupied the spot since the '60s, was gone, and in its place was a brand-spanking new bench, but of a completely different type.  The old one had a metal frame on which sat two wooden boards, with another single wooden board at the back to support the sitter.  This allowed me to swing my legs around and sit facing the other way, leaning on the back-board like a railing.  That way, I could look along the street in which I'd lived from 1965 to 1972.

The new bench was an all wooden garden-type bench, which unlike its predecessor, had armrests on either side, allowing the sitter a better 'lounge' while watching the world go by (unless he's sitting between two other sitters), but you can only sit facing front (so STAN LEE would've loved it), not the other way should the notion take you.  However, I couldn't help but feel saddened by the sudden absence of a familiar item from my youth, and I fear that sitting there from now on will no longer be the same sentimentally-satisfying experience it once was. 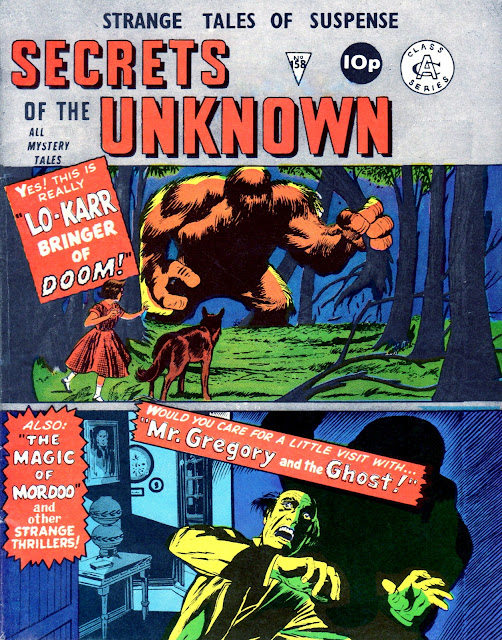 The old bench was in good order the last time I saw it a couple or so months back, so unless it was subject to a severe act of vandalism in the interim, it didn't really need replaced.  I've got photos of the area which are sure to include the bench, and I'll add one to this post when I find them (now done).  In the meantime, I've included a trio of Alan Class comics covers which conjure up memories of the '70s as I sat on the original bench poring through my then-new acquisitions.

Incidentally, within months of buying these comics, I gave them to a friend, who returned most of them to me a little over 30 years later, so two of these are the actual comics I had with me at the time, not later replacements - with the exception of SECRETS Of The UNKNOWN #158. 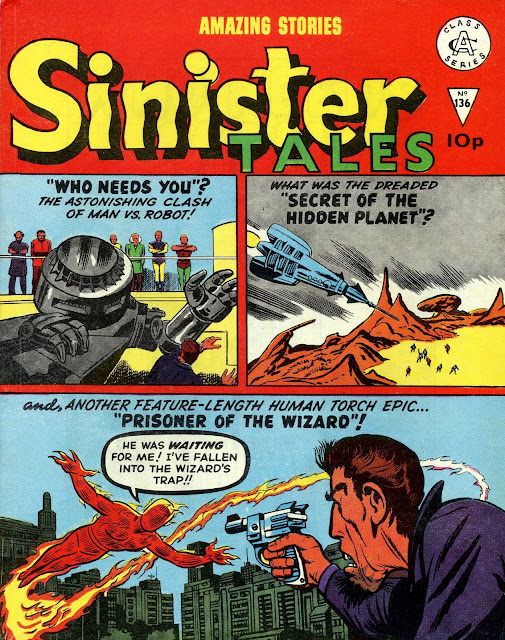 Are there any places that you associate with certain comics (and vice versa obviously)?  If so, feel free to wax lyrically about them in the comments section, considerately supplied exclusively for your convenience.

Update:  A few months later, I was sitting on the new bench and a passing dog-walker told me what had happened to the original.  Apparently, a group of local neds uprooted it, still attached to the paving slabs it was bolted to, and flung it into the nearby burn, damaging it beyond repair.  When I was a teenager, if I was bored, I'd build a model kit or something.  How unlike the youth of today, who'd rather destroy things it seems.  B@st@rds!
Posted by Kid at Sunday, April 21, 2019

I remember 181 Archway Road, Highgate, London N.6. with my strongest comics memories. Until he retired in 1971 with the introduction of VAT, Mr. John Strudwick was my local newsagent. My parents had their morning papers delivered from there and once a week from the youngest age I would be with my mother when she went in to pay the weekly bill.

From 1957 on I discovered that Thursdays were the day the new comics were delivered. That is the reprint titles of American comics, not the British weeklies like Eagle, Beano, Dandy etc which were delivered with the morning papers.

The pile of comics on the counter to the right of the door when you entered the shop was where one could find Marvelman and all the other Miller reprints. This is where I was delighted to find the UK reprints of the Australian Biggles comics.

In order to get the best choice I remember leaving my primary School at lunchtime to catch a Trolleybus home to go to Strudwicks before the after school crowd could get there before me.

This continued for a few years and included getting the British reprints of Mad Magazine.

Strudwicks was also where I purchased my Matchbox Toys and later Eaglewall kits of WW2 warships.

The comics pile grew in the final years of the shop as American comics were imported and the UK b/w reprint titles stopped being produced.

The Strudwicks were a very descent English family, one of their adult daughters was a Missionary, it was nice to shop for comics there when other places put comics on the lower racks of smutty magazines which always added to the embarrassment of being an adult buying comics.

It's always a pity when perfectly serviceable benches, fences, railings etc are replaced for no apparent reason. I love the fact that I can go to the shopping centre near where I grew up and touch the same fence that I used to climb over every Saturday morning on the way to buy the latest issue of the UK Transformers comic (don't think I'm quite nimble enough to leap over it these days - not without taking 4 times as long and looking utterly ridiculous, at least).

Everytime I see an Alan Class comic I think of Blackpool and family long weekend holidays back in the 70s where comics seemed to be everywhere, especially Alan Class comics.

Great memories, T47, and so detailed. That sounds like a shop I would've loved. That's one of the other drawbacks to getting older - the shops we loved as kids and with which we have so many wonderful associations all disappear.

I'm the exact same, DS. To walk on original paving I trod as a kid, to see a lamppost I climbed, or a fence I jumped, always reconnects me to my past. One by one they're all disappearing though. Sad.

Blackpool was a great place for comics in general, PM. You could still buy late '60s Marvel and DC mags brand-new off the spinner-racks up to the mid-'70s - maybe even beyond. I couldn't say for sure because the last time I was there was in 1974.