Imagine this:  It's your birthday, and your other half presents you with her gift - a hideous, hand-knitted multi-coloured monstrosity of a pullover that even NOEL EDMONDS wouldn't be seen dead in.  The sleeves are too long, the trunk too short, and it hangs off you like an unsecured straitjacket that someone's vomited over. Then she asks "Well, what do you think of it?" while fixing you with that puppy-eyed look of expectation, relying on you to validate her knitting 'skills'.  Not since she asked you "Does my bum look big in this?" have you found yourself in such an awkward spot.  Do you give her an honest assessment of her handiwork, or do you lie through your teeth to spare her feelings and ensure your own peace and quiet?

I now find myself in a similar situation.  I recently acquired the special 'universe edition' of TV21 #243, which was originally produced for inclusion with a Blu-ray boxed set of GERRY ANDERSON puppet shows a few years ago, and which is now available on its lonesome.  The verdict?  Well, while not in the same category as the above-described item of knitwear, I find myself divided in my reaction to it.  How can one be so thrilled and disappointed by something at the same time?  It's a joy to see, to hold, to own, but - compared to TV21 as it was in its heyday, it's hugely disappointing. The artwork, with the exception of the LADY PENELOPE, THUNDERBIRDS, MARS SPACE PROBE, and (go on, Gordie, force yourself) ZOONY The LAZOON pages, is nowhere in the same league as days gone by, and the shape of some of the speech balloons is dire.  I find myself wondering how they could get it so wrong, while at the same time feeling grateful that they did at at all.

Even GERRY EMBLETON's art on STINGRAY falls far short compared to his work on the strip back in the '60s when he took over from his brother RON. However, allowances can be made for the fact that he must by now be an old man, so perhaps it's unfair to expect the standard of work he used to deliver.  MARTIN BAINES' art is really nice, though his TB2 shape isn't too accurate, and the difference in size between TB1 & 2 is unclear in one panel, leaving both craft looking more or less equal.  BRIAN WILLIAMSON's art is okay, but doesn't capture the mood of the original AGENT 21 strip.  The FIREBALL XL5 strip, while not bad, cries out for the hand of MIKE NOBLE, and one wonders why he wasn't offered heaven and earth to produce the one page required.  As for MARTIN CATER's and MARTIN ASBURY's art on the ZERO X and CAPTAIN SCARLET pages - leave it out boys, you're 'avin' a larf.  Cater's art is amateurish, while Asbury's betrays his later career as a storyboard artist for movies.  Only the colouring (by 'SPECTRUM') saves it from looking like not much more than a 'rough' layout.

And yet... and yet... this is a collectors' item and you should grab one while you can. Despite my reservations with some aspects of the comic, it's still a thrill to see TV21 resurrected for one more issue.  (Though FANDERSON beat them to it in 2010 with their own version of the 'next' ish - see below.)  So ignore my negative reaction to parts of this special edition and order your copy from this link today.  (If only they'd put The DALEKS on the back page, I'd have been a very happy man.)  If you're a fan of the original TV21, then you'll be thrilled to hold this issue in your hands - though I reckon you won't be able to shake off a measure of disappointment at the same time.  Still, don't let it get away.

Already got this comic?  Agree?  Disagree?  Let's read your views in the comments section.  Insults and questioning of my parentage are most welcome. 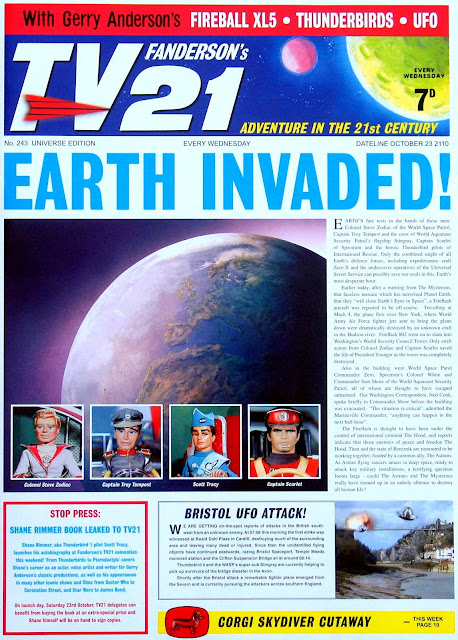 I can't say this will be high on my fetch list currently.
I have an advantage over you - i only have less than two score TV21 issues, so lots of the old is still new for me.

This is the first time i recall hearing of Fanderson. I do believe more investigation is required. Thanks for the pointer on that.

The Fanderson link should be in my blog-list, 3, so take a look. You should grab a copy of #243 while it's available, 'cos once it's gone, it's gone. And the comic is very reasonably priced.

Ta - found it.
And they have UFO front and center in their logo - as it should be.

I'm more of a Fireball XL5 man. Robert the Robot was a great actor.

Fireball XL5 is my favorite on the supermarionation side of the productions, UFO on the live action side. And Fireball XL5 had the better comics. So, can't argue with you there.
And yet - they don't even have it in the main logo.

Meanwhile, Hamir has sent his son with the first six issues of FAB from back in the early 90s for me to peruse. Thanks again for the tip.

As it happens, I've got a full set of FAB in a box somewhere. I've also got a 10 issue set from the late '80s (I think) called Action 21, which reprinted strips from TV21. Then there was S.I.G., of which I've got the early numbers when it reprinted a complete serial every issue from TV21 - I quit buying it when it stopped the reprints.

Thanks for heads up Kid. Interesting for me that this was the first new Project SWORD story and artwork for fifty years! I understand there is an even newer SWORD story in the programme from the latest Fanderson convention this year, which I've yet to see.

Haven't seen the new convention programme myself, W, but the second image shown here is the only one I have - bought via eBay simply because it was in the TV21 format.

Oops, my memory's mixed them up. It's S.I.G. I've got a full set off, not FAB. In fact, now I'll have to check I've even got a mag called FAB. Where's my brain pills?

Update: FAB is Fanderson's own mag, and I don't actually have any of them at all. Also, the mag which reprinted complete serials from TV21 was Century 21, not S.I.G. At least I was right about Action 21, which predated Century 21. Phew!

I've got a bunch of TV21 and TV Century 21 and a few Action 21. I had wondered what the relationship between the mags was.

...and where does TV Action fit into all of this?

S.I.G. was a magazine (perhaps by Fanderson, can't remember now, and they're in a box somewhere so can't check) which explored the worlds of Gerry Anderson. TV Action was a renamed Countdown, which, in its first incarnation, reprinted Fireball, Stingray, and Captain Scarlet strips from TV21. I think there was the odd reprint when it became TV Action with #59. The complete issue is on the blog somewhere. Check out eBay - there's a stack of all of them on sale at the moment. Even if you don't want to buy, you'll see what they look like.

Well, that explains why i've never run across #s 1-58 of TV Action. I've got #59 and, i believe, most of the following year.
I didn't realize Countdown fit into the equation, too. That's the tricky bit about randomly encountering the past - it's easy to miss the overall flow of things.

S.I.G. keeps nagging at the back of my brain, like it should be something familiar, but nothing has clicked as yet. Maybe i should consult the Strategic Information Group and see what they've got?

S.I.G. started life as 'Supermarionation Is Go' before shortening to S.I.G. (Maybe it sounds familiar because they used to say 'S.I.G.' on Stingray, which I assume stood for 'Stingray Is Go'.) Like I say, you can see pictures of the mag on eBay. Incidentally, TV Action #59 is, of course, Countdown #59 and the 1st issue of TV Action at one and the same time, so no wonder it's confusing.

Ah! That helps. Early 80s, right? I think i saw just a couple of those a long time back. Good, are they?

The problem was too much SIG in my head, ranging from the aforementioned and similar operations groups to the weapons to SIGue SIGue Sputnik.

Yup, early '80s. Good? I guess so, but it's been so long since I looked at them I can't quite remember exactly what the contents were. Interviews, articles, etc. Certainly worth having if you're a fan of all things Gerry Anderson.

Update: What the hell am I thinking of? S.I.G. stands for 'Spectrum Is Green', not 'Stingray Is Go', and is from Captain Scarlet, not Stingray. My brain hasn't woken up yet.