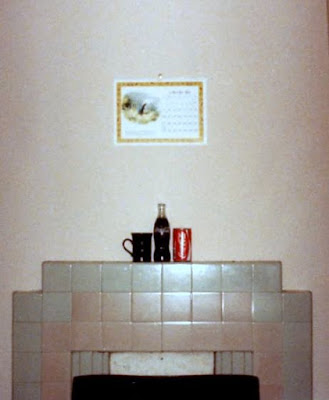 You saw the above photo in a recent post, but it's worth showing again because of a rather interesting fact.  See that bottle of COCA COLA on the mantlepiece?  It ain't!  A bottle of COKE that is.  In actual fact it's a radio (which I still have today), bought in my local CO-OP store back in the early '80s.  Looking at it reminds me of an event which took place in the bedsit room above the one in the photo, back in early '85, so in the absence of anything better to write about, I may as well share it with you now.

A woman and her boyfriend took the room above mine for a short time, and one day, while her man was out, she asked me if she could borrow my radio.  Now, to be honest, I don't like lending things, mainly because folk tend not to look after other people's possessions, and what followed is a prime example of this.  I lent her my radio (reluctantly) and she took it upstairs, but a little while later I had occasion to ask her something, so went up to her room and chapped the door.  When I went in, she had the radio resting on top of a calor-gas heater, but it was sitting at the front with almost half of it over the edge of the heater - where it would've caught the rising heat and eventually, being plastic, warped as a result.

Well, I wasn't too pleased, but hiding my annoyance at her stupidity, I moved it into the centre of the heater's top, saying that it would be better there.  I have a vague memory of her saying that she was finished with it anyway and me taking it back downstairs to my room, but possibly I might've gone out for a while first and taken it back when I returned.

However, what a cretin.  It was almost as if she was trying to damage it on purpose, because what sensible person would balance something over the edge of anything, never mind a calor-gas heater?  From that point on, I resolved never to lend anything out again, and with one possible exception, I never did.  That one exception was a book, though it's possible that occurred before the incident with the radio - I'm no longer sure which came first.

On that occasion, a woman I knew asked to borrow a book of mine.  I explained that I'd only let her if she promised to look after it and return it in the same condition. Yes, of course she would, she was always very careful with things and I could rely on her to handle it with care, she said.  What a fool I was for believing her.  When the book was returned, it was dog-eared, with ring marks from the bottom of a wet cup on the cover, corners folded over to mark her place, the spine was cracked, and it absolutely reeked of cigarette smoke.  If she'd been a guy I'd have punched her lights out!  As is typical of stupid, careless people, she couldn't understand why I was annoyed with her.

Needless to say, nowadays if anyone asks to borrow anything, my answer is a resounding "Feck off!"

Have you ever lent anything out to anyone, only to regret doing so when it was returned?  Tell all in the comments section, frantic ones!
Posted by Kid at Saturday, November 25, 2017

Well... I tend to lend things out as long as they are not valuable.
The thing I regret to this day lending was an issue of french bande-dessinée magazine "A Suivre" wich has the rape scene from the story "El Gaucho" by Pratt and Manara. It happens I had lent a couple of "A Suivre" to a guy and his brother, both in their twenties.
They returned the magazines in apparent good condition. One day I was re-reading the "El Gaucho" story and when I reached the rape scene the drawings seemed to pop up from the pages. You can guess what happened. One of them had traced the drawings of the rape scene and put so much pressure on the pencil that the drawings of those pages have a kind of 3-D effect. I never saw those guys again as the drawing classes ended and I am ashamed to have that issue in my collection.
What if I had lent them to someone else not knowing what they had done? worst yet, what if I had lent to a female friend? They would rightly think I was a pervert or worse...
I'll have to buy another on ebay one of these days and toss the one I have in the garbage.

A rape scene? I think you'd be better throwing the one you have in the garbage and NOT buying another on eBay. I have to be honest and say that if you'd lent the mag to a female friend, it's not the fact that the pictures had been obviously traced, but the fact that you had pictures of a rape scene which would have made her think you were a pervert. And as you say - rightly so.

Second story is similar to mine. I had started collecting and reading the 'A Song of Ice and Fire' books after watching the first season of Game of Thrones, which was based on them. I finished the first, and my sister asked to borrow it. Fair enough, but then it came back looking like it had spent a few years in a public library. Or a tumble drier. Spine and covers all bent and scuffed, inner pages only slightly better. Only paperback, but still.

The kicker was that she apologised for returning it in that condition, but at least partly because she thought I hadn't read it yet. She was fairly surprised to find out that I could - and managed to - read a book without brutalising it...

Still, better than the guy who borrowed my prized Ray Harryhausen book and imported Sega Dreamcast games. I haven't seen those since. In fact, I think I recall that he lent the latter out to someone else, and never saw them again, himself.


I wouldn't be lending those to a female friend in the first place. I cannot ever forget the one day I was watching a movie with a female friend that had been sexually abused in the past. It was a mainstrain movie and there was a rape scene in the middle of it. She began shacking and sobbing and we left the theatre as it was unbearable for her to continue watching the movie after that.

One can only sligthly imagine what a woman goes through when she's exposed to that.

And you're right, I wouldn't lent it in the first place nor even to a guy. Fact is I didn't really remembered there was that scene in the magazines. I had lent them because one of them was interested in a story there by other artist/writer team.

That's one thing I hate, WJB - people lending things they've borrowed to someone else without permission. How presumptuous. I did it once myself when I was about 13 and never saw the items again (2 Dennis The Menace books). The guy I lent them to said he didn't know what happened to them - now I wouldn't let someone get away with that excuse. In fact, when someone else tried something similar back in the early '80s, I made sure I was financially reimbursed. Anyway, I learned my lesson after lending those 2 books never to lend anyone else's stuff again.

Ah, right. The way you worded your previous comment, F, made it sound as if you lent the magazine because of the rape scene, and that you were disappointed to find the illustrations of that scene damaged. I'm not familiar with the magazine or the story you mentioned, but I don't think I'll be searching it out. I can see now that your suggested scenario of lending the mag to a female friend was a hypothetical one for the purpose of making a point. At first it read as if you were admitting to being a pervert.