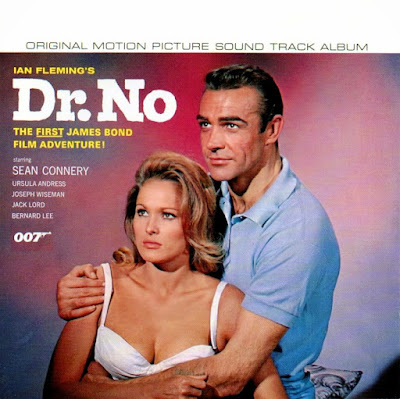 Y'know, I'm quite partial to the original motion picture soundtrack of the first JAMES BOND movie, Dr. NO.  Although I didn't acquire it 'til around 1973 or '74, it reminds me just as much of the '60s as it does the '70s, which you might think is no big deal considering when it was first released.  There's more to it than that however, and let me try and explain just what I think it is, in the unlikely event you might be remotely interested.

First of all, I was only a young teenager in the early '70s, and to me at least, the stylish differences between the two decades weren't all that obvious.  This was because there were still many '60s cars on the roads, and, certainly where adults were concerned, clothes fashions were pretty much the same.  My grandparents still dressed in clothes that could have come from the '30s to the '50s, and my parents' apparel was much as it had always been since as far back as I was capable of remembering.

Another aspect that helped dull the differences between the decades was the fact that, right up until the late '70s, the furniture in our house had graced our three previous homes since 1960, and mainly dated from the '50s (and perhaps even from before I was born).  As this was 'the norm' for me, my childhood and teenage years seemed to take place in an unchanging, ageless environment, where the dividing lines between the decades didn't really exist.  They might well have for others of course, but not to me.  (It would be interesting to know if my friends from the period considered my house [and room] decidedly old-fashioned, or accepted it as normal in the same way that I did.)

So, because the accoutrements of my bedroom in the '70s didn't reflect the style of the period, it was as if I operated in a timeless bubble that was immune to the changing fashions of the passing years.  I've probably overstated the case in order to make the point, but that's why, whenever I listen to that Dr. No soundtrack, I have a real sense of the '60s around me, and associate it as much with the decade it first appeared as the one in which I first heard it.

Is there something in your life that reminds you of an earlier time than the one in which you first acquired or experienced it, or do you think I'm merely babbling like a lunatic?  If the former, feel free to express yourself in the comments section. 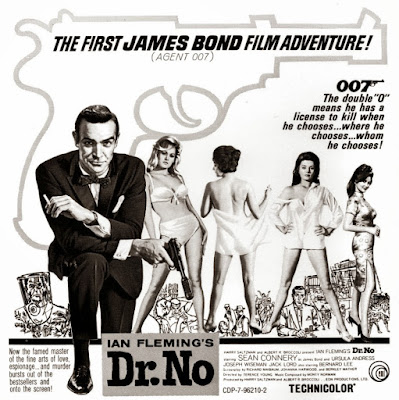 I rather ran the opposite - a military childhood, the longest in one spot was 4 years. Furnishings tended to change with each move, only pieces carrying on from one location to the next. I wound up embedding experiences & memories in different personal objects that essentially kept the stories for me. Other objects were attached to specific people, keeping old friendships in store for me.
Like you, my impression of time as a youth was rather skewed, but by constant flux rather than stasis.
Frequently when rediscovering the past now, it's for the things i missed the first time around in the shifting. And while there's a few Bond soundtracks in my regular background mix, for the life of me i cannot recall the music for Dr. No at all.
Guess it's time to go listening...

I suppose the Dr. No soundtrack could be regarded as a bit dated now and it sounds rather odd in places, but I remember listening to the vinyl LP (which I still have) in my room back in the mid-'70s, surrounded by the furniture I'd grown up with through the '60s up to that point. Add to that the fact that when I decorated the room around that time, under the old lino were old newspapers from 1960, one of which contained an article on John Barry, pre-Bond. So parts of the '70s felt very '60s to me, and in certain ways, the '60s and '70s sometimes seem indistinguishable to my mind. Not always of course.