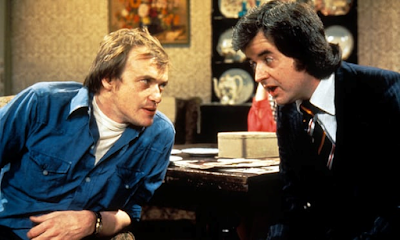 It was good to see JAMES BOLAM, in an interview, state that he has nothing but happy and fond memories of the recently-departed RODNEY BEWES, saying that his erstwhile co-star's death has hit him pretty hard.  He explained that the pair not speaking for 40 years wasn't due to a fall-out, but was simply down to them having separate lives and careers after the end of The LIKELY LADS in 1976, with the release of the movie based on the hit TV show.

He said:  "This is what happens in acting.  You work with people, you get to know them, you like them, we have a great time and the job finishes and you go off and it all starts again with other people and you can't keep contact with everybody that you know."  This seems entirely credible to me.  I think that Rodney so loved The Likely Lads that he wanted to believe that, just as in the show, he and James were the best of pals.  And so they probably had been, but it certainly won't have been the first time that a workplace friendship fizzled out after one or both parties departed for pastures new.

Bewes wanted to make more episodes of The Likely Lads, and always hoped that the show would be revived, right up until his death.  Bolam, on the other hand, though proud of the show, seems to have regarded it as just another job and had no great sentimental attachment to it - at least not to the same extent that his fellow thespian did.  In the ensuing years, Bolam was never short of high-profile TV work in various series, whereas Bewes didn't fare quite so well in that department.

I must confess I found it heartwarming to hear that Bolam held no animosity towards Bewes, and regards him fondly, but it would've been good if Bewes had known that before he died.  I must say that I have mixed feelings about there being only two series of WHATEVER HAPPENED To The LIKELY LADS.  On the one hand, it would have been good to see further episodes, but on the other, then we might not have had Bolam playing ROY FIGGIS in his other excellent comedy series, ONLY WHEN I LAUGH.

Enjoy the brief clip of Bob and Terry below.

Ever see the Ant and Dec remake of the No Hiding Place episode? It wasn't good. Only plus point of it was seeing Rodney Bewes making a brief cameo appearance as a newspaper seller.

I did - though it only reinforced what perfect casting Bolam and Bewes were. Apparently, Bewes was eager to be involved, Bolam didn't want to know.

JS, I must confess that your comments caused me some concern, and I'm unsure whether to publish them or not. On the one hand, there's a lot of personal stuff in there which is nobody else's business; on the other, if other people read it, they might be able to say something that might make you change your mind. Something to remember is that you're under a lot of stress at the moment and, while in thrall to your depression, might not be making entirely rational decisions. I'd advise you to see your doctor, or someone sympathetic who you can talk these things over with. You'll know yourself that, however 'down' you get, there are times when things don't seem so bad. I'd urge you to look forward to that next moment when there seems a glimmer of hope in your life. As for selling off your possessions, I'd advise you to hold off on parting with what you consider your real treasures. (Sentimental as opposed to monetary value.) I've done it myself before, then regretted it after a while and then spent years acquiring replacements. If I withhold your name (even though it's not your real one), would you mind me publishing your comments as a post in the hope that someone might respond in a way that might be of help to you? It seems unlikely from what you say that things could get any worse for you, so hang on to the thought that they can only get better. I really hope you can work through this and not do anything drastic. Incidentally, there's a lot about your own situation I can relate to, but I'd urge you to seek help from those who are in a position to do so. Sometimes just talking things over can 'let some air out of the balloon'. Don't give up.

Read your follow-up comments, JS, and I'm deliberating on what to do with them and your two earlier ones. I still have furniture and ornaments that I've grown up with and I couldn't bear to part with them, so you must be really down to get rid of yours. The possibility of you living in your childhood house again intrigues me no end, so let me know if it ever comes to pass. Just in case it does, wouldn't you be better hanging on to your furniture so that it can be reunited with the house if you move back in? I once considered offering a woman who lived in one of my old houses £100 if she'd let me 'look after' her house while she was on holiday. My idea was that I could live there for a fortnight and take replacement items from my childhood back there (where I'd first got them) and re-establish the 'connection' between them. Didn't ever get around to asking her, but maybe one day I'll ask the current tenant/owner. Should I ever win the Lottery I'll buy every house I've ever lived in - all six - and take turns staying in them through the year. I'll add a bit more later.