I've shown this poster (which was one of three free gifts with SUPER DC #1) before, but this is a superior scan to the ones used previously (which I've now replaced with this one).  It's based on the CARMINE INFANTINO & MURPHY ANDERSON poster of BATMAN & ROBIN from the '60s, but is obviously nowhere near as good.  (I think it was drawn by MICK ANGLO, but couldn't swear to it.)  However, if you had this poster as a kid and longed to own it again, here's your opportunity.  All you need is a printer.  (Can't help you with that, alas.)

And in case you've never seen the Infantino/Anderson pin-up, that's it below (sans 'inscription') so that you can compare the two. 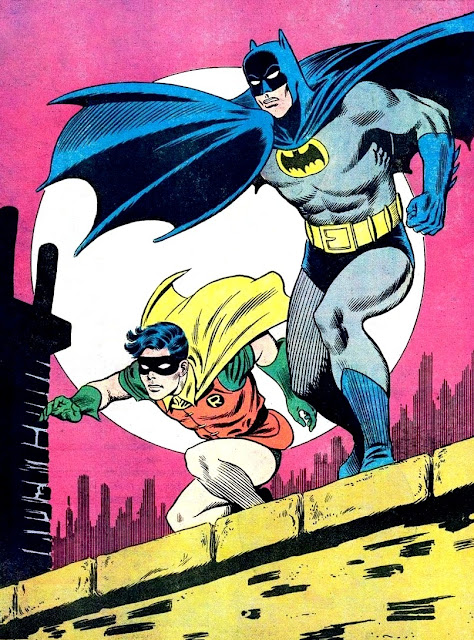 Oh, Right! Now i've got to go hunting to find the Infantino/Anderson original for comparison.
No hints where/when to look?

On this very blog of course. Just type Carmine Infantino into the search box on the blog's home page.

Y'know... I think i'm going to run Infantino through the search anyway, just to see what else i might stumble upon. But, yeah - recognized it as soon as it was in front of me. The corrupted database in my head just wasn't accessing properly.

Happens to the best of us from time to time. Enjoy your trawl through the archives.