A DASH OF COLOUR, BATMAN?

I imagine that there were probably BATMAN colouring books in the '40s & '50s, but they really came to the fore in the '60s to cash-in on the TV series.  At least, that's how it seems to this old fart, but, surprisingly, I don't think there's been a decade that hasn't had a colouring book devoted to the DC COMICS character.  I don't have all of them, but I've got a couple from the '60s, a couple from the '80s (or maybe it's the '90s - I've tucked the books away again and can't check), and only last week, I saw the latest one in HOME BARGAINS and snapped it up.  (I have to say that it's worth buying if you see it, 'cos it's got some cracking pictures in it.)

The only one I actually owned back in the '60s is the ROBIN in the BATCAVE book, and the one you see here is a replacement I acquired probably more than 20 years ago.  I've shown the '60s books before (with some of the age wear digitally removed - this time they're mostly unretouched), but thought it worthwhile showing them again alongside their more contemporary companions.  (One is actually an Activity Book, but it contains many pages for colouring, so I decided it deserved to be included.)

So that's it, Bat-fans, enjoy the images on display and perhaps even relive part of your childhood in the process.  Coming next - the lost JACK KIRBY SPIDER-MAN pages.  (Nah, calm down, I'm only joking.  Your heart skipped a beat though, didn't it?  I like to keep you all on your toes.) 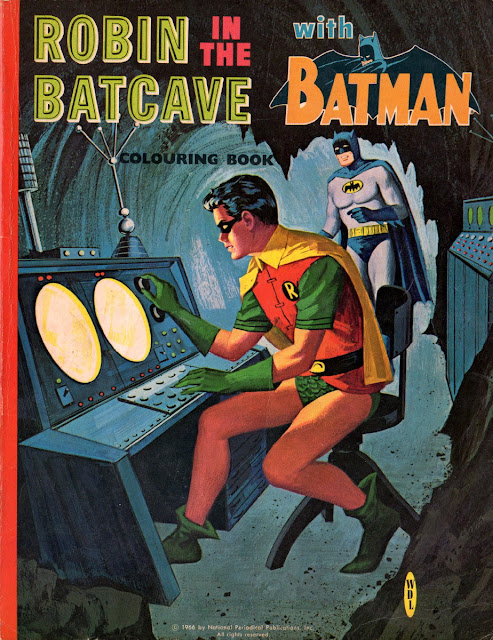 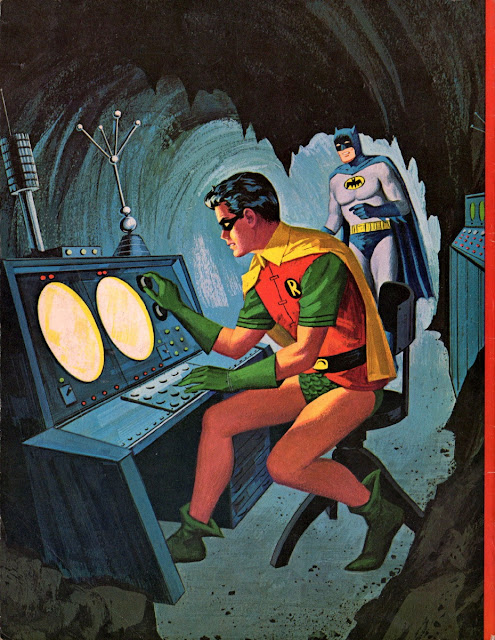 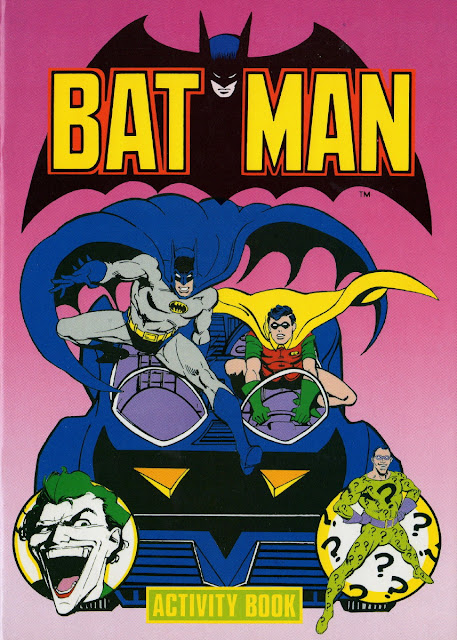 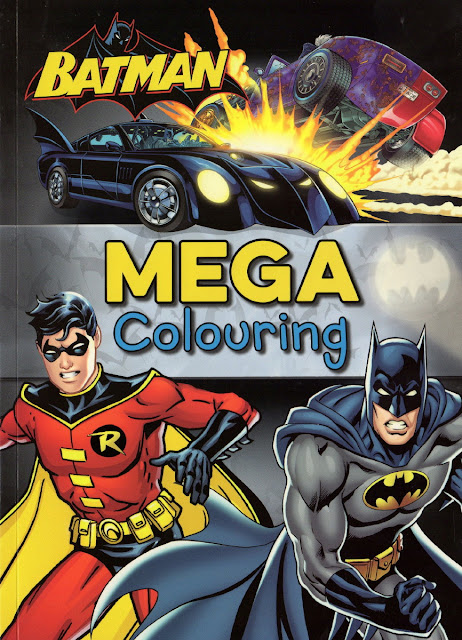 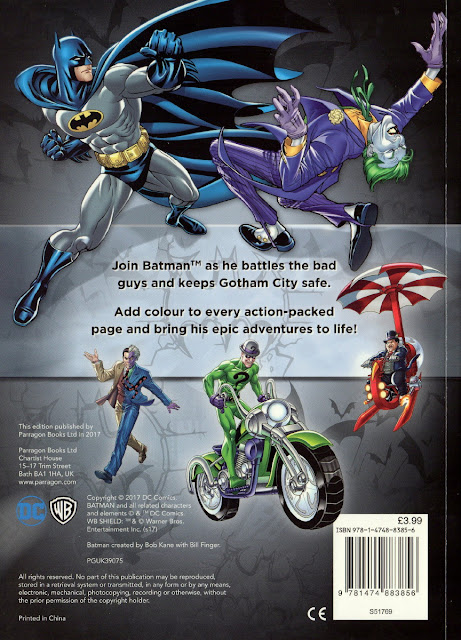 Hmm...
Hadn't thought about it before. I agree that there must have been (right?) colouring books of Batman and other DC heroes before the 1960s, but sure can't seem to remember actually having ever seen one. In fact, i can only think of one superhero colouring book at all from the 40s, and one from the 50s. Captain Marvel and Captain Video, respectively.
I don't think it was just Batman that got the boost at that time. I know my Captain America coloring book is from 1966, likely due to the Marvel Super Heroes cartoon featuring Cap, Hulk, and Iron Man. There's probably a ton of merchandised material produced for kids during that time if one were to go digging.

So- Do we get to see how you coloured the pics?

I once showed the cover to a Superman colouring book which was from the '40s (it's on the blog somewhere), so there was probably a Batman one too. Because of the way the '60s books are bound, they'd be difficult to open for scanning without damaging them, but as it happens, there's no need - I haven't coloured in any of the piccies.

"Robin In the Batcave" looks familiar. I don't remember having it myself, but I think a classmate in second or third grade had it.

IIUC, 99% of Batman merchandise was from 1966 or later. The character must have been popular enough in the Golden Age, but was still maybe on the B list. Then again, there were two Batman movie serials in the 1940's, a newspaper comic strip, and Batman & Robin regularly guest starred on the Superman radio show.

With the Golden Age Captain Marvel, my impression is that the DC vs. Fawcett lawsuit prevented a lot of merchandising. Toy companies did not want to risk getting tangled up in the case as co-defendants.

And, yes, it was not just Batman that got the boost in 1966. I did have that Captain America coloring book in 1966 or '67. There was the Marvel Super Heroes TV cartoon series in syndication, and the Fantastic Four and Spider-Man on the ABC TV network. And Filmation's Superman show on the CBS network. And the costumes for the Captain Action line included heroes from DC, Marvel, King Features, and others.

Going by the 'Batman Collected' book, TC, there does seem to have been BM merchandise around in the '40s & '50s, but whether it included a colouring book I couldn't say with certainty. I just thought that as Superman had one, it was probably likely that BM did too.

True, Batman wasn't the only one to get a boost in '66, but I think he led the way, and even opened the gates for other publishers to follow when they saw how successful BM was in the merchandising stakes.

There's a far wider choice of superhero merchandise around today of course, but it's probably produced in more limited numbers than in the mid-'60s.

I had the first Whitman CB and probably the second painted cover way back in 1966. Of course, I was at the perfect "Batmania" age in 1966 and bought anything I could get my hands on. Since money in my family was tight, that consisted of coloring books and gum cards.

I used to love coloring books when I was young and they kept my quietly occupied whenever I was at my grandmother's or relatives houses (when I wasn't reading the latest comics, natch!). Animated shows were big for me, including Space Ghost and Journey to the Center of the Earth.

Thanks for bringing back memories of those long-ago days when a box of crayolas was all one needed to keep out of trouble.

And I believe some of the Batman CB's were illustrated by Joe Certa, who did lots of work for Western.

The only Batman colouring book I remember having back in the '60s was the Robin In The Batcave one, but the one above it seemed familiar to me when I eventually acquired it years later, and I wonder now if a friend had it, or maybe a classmate who let me colour in a page during a free moment during lessons one day. I also had a Clangers colouring book in the very early '70s, but I'd be surprised if you've ever heard of them.

Kids today don't seem to be so easily amused as we once were, eh, Nick?