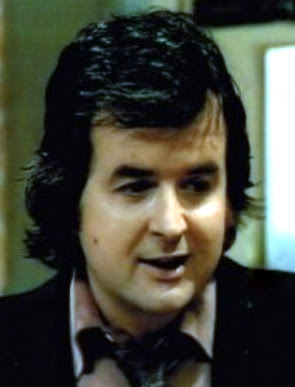 A shame to hear that RODNEY BEWES, alias BOB FERRIS of The LIKELY LADS, died today aged 79.  For years it was his wish that JAMES BOLAM, who played TERRY COLLIER, would speak to him again after falling out with him in the '70s, but it was not to be.  It'll be interesting to see if James Bolam comments on Rodney's death.  Condolences to his family, friends, and fans.  It's just a shame that we'll now never get to see that much wished-for update on the lives of Bob and Terry (and Thelma and Audrey).

Incidentally, I'm typing this in the very same room that I saw parts of the very first episode of WHATEVER HAPPENED To The LIKELY LADS (no question mark in the title) back in 1973.  I say 'parts' because I turned over at the start of the programme to another show (on ITV) I regularly watched, but turned back during the adverts.  (Once I could've told you just what that other show was, but no longer, alas.)  However, it wasn't long before the adventures of Bob and Terry became required viewing, and it's my favourite comedy show of all time.

The show was repeated over the years, but it always started from the second episode for some reason  - probably because the first was the 'set-up' episode, bridging the gap between the end of the '60s series and the '70s sequel, so if it was left out, viewers could just drop in as if the show had been on forever. It wasn't until 1995 when the series was rerun from the very beginning that I got to see the initial episode in its entirety for the very first time.  It took a whopping 22 years, but it was worth it.

If you've never seen 'Whatever', you've missed out on a classic.  Nip down to your local HMV store and treat yourself to the DVD box set at the earliest opportunity.
Posted by Kid at Tuesday, November 21, 2017

Sad news. I actually have his autograph somewhere in my Archive Of Stuff. One of the best comedies of its time, the Christmas special is fantastic, hopefully it'll be repeated now as a tribute to Rodney in the run-up to xmas.

I've got the DVD box set of the surviving '60s episodes and the two '70s series (which were far superior), as well as a separate DVD of the 1976 movie. The '70s shows sre currently being repeated on one of the Freeview channels, but I may dig out the DVDs and watch them again from the beginning. I used to think we had forever, but now I'm not so sure.

Damn. Guess i need to bump WHATEVER HAPPENED To The LIKELY LADS up on my to-view pile. Very sorry to see him gone just as you were pointing me back to the show. It'll put a melancholy edge on the humour, but i can't think of a better way to honor him than to let him make me laugh again.

I'm rather glad they never made an updated version - Bob and Terry as pensioners pontificating about free bus-passes and the winter fuel payment, no thanks. Every year I search for my favourite Christmas specials on YouTube including the 1974 Likely Lads Xmas episode - that was a fine send-off for the series.

I heard the news about Rodney Bewes during the 'Front Row' programme on Radio 4 - from 6.30 to 7pm I'd been listening to 'Ed Reardon's Week' which features Brigit Forsyth. Small world.

On one level, perhaps it's good that Bob & Terry still exist as eternal middle-agers, CJ, but on another, it would've been good to see how they tackled the problems of old age, especially if the scripts were up to the standard of the '70s series. When you're a pensioner, you may find that the topic of old age is more relevant to you and wonder how Terry & Bob would've dealt with it. I know I will.

I remember him as Mr Rodney on Basil Brush....

I know he did the show, LH, but can no longer recall whether I saw him do it at the time. (Probably, but not often enough to leave an impression.)

Kid, did you hear 'Front Row' on Radio 4 last night? James Bolam was interviewed about the Likely Lads and Rodney Bewes' death. He denied they had ever fallen out and said it was just a media invention!

No, didn't hear that, CJ - I'm off to listen to it on iplayer right now.