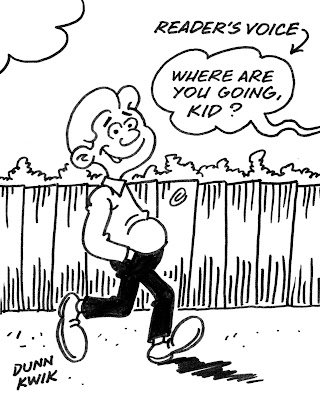 One thing that always annoyed me about British humour strips was when the characters were portrayed as being aware that they existed only in a comic strip that was read by 'real' people.  If a character spoke directly to the reader, it told me that the writer had struggled to come up with a decent idea that particular week, or had simply taken the path of least resistance.  I didn't mind it when it was a puzzle or activity page, and STEADFAST McSTAUNCH (or whoever) was inviting the reader to join the dots or colour in a picture - that was okay, but when it was part of a story, it could be irksome.  I don't mind when a character is 'looking out' of a panel and speaking for the reader's benefit in an indirect way, but not when he's addressing the reader 'straight-on'.  (Incidentally, I'm not talking about host-type, 'serious' strips like TALES Of The WATCHER, only humour ones.)

Even worse though, was when there'd be a speech balloon from off-panel, with a 'reader's voice' label advising us of the fact.  What's wrong with just having a friend, neighbour, bystander, or passerby asking "How will you get your homework finished in time now, Roger?" instead of an intrusive comment from an imaginary reader?  As I said in a previous post, this constant reminder that we're reading a comic ruins the sense of internal 'reality' required to make a strip believable.  (Even 'funny' strips require an element of reality to accentuate the humour of the piece.)

Don't get me wrong though - a 'reader's voice' word balloon can sometimes be used to good effect on occasion, but it loses it's ability to surprise, amuse and entertain when it's the 'default setting', resorted to as a matter of course rather than for a specific and surreal effect.

(I couldn't be bothered searching through a pile of comics to try and find a suitable pictorial example, so I quickly drew the above one myself with a Sharpie fine marker.  Remember, it's only a 'quickie'.)
Posted by Kid at Wednesday, November 15, 2017

I don't recall having seen that Reader's Voice label. I may have blocked the memory if it has happened previously, because it would indeed be quite off-putting. There are very few characters that can handle that sort of awareness well, and most of them do so because they exist half outside the rules - like Daffy Duck or Deadpool. The only times i've seen it done well with less... insane characters has been when used for effect in a one-off story. Ongoing characters who talk to the reader as you have him here (as opposed to a host type character telling or introducing a tale) very rarely work. Sometimes it seems, as you said, like a lazy way to go. Other times, it seems like they were either exercising a bit of pretension, or reaching for something beyond their ability to grasp. For me at least, a sincere failure can be almost impossible to sort from an artless attempt to look "arty."

Hmm... that seems rather rambled. I hope it's coherent on your end. Kush and need for sleep make it hard to tell here, so - as has been said before - i'm off.

Makes perfect sense at this end, 3. (I'm off as well, but it's nothing a bath and some deoderant won't fix.) Obviously, I wasn't including 'host' type tales, so I'll add that to avoid confusion.

I hadn't really thought about it till today - but I like comic characters "breaking the fourth wall".

What a huge surprise, CJ - not like you to have a contrary opinion.

If anything, I would expect "breaking the fourth wall" to be more of a problem in a serious strip than a humor one, since the latter is usually less realistic anyway.

IIRC, some Hanna-Barbera cartoons, including the Wacky Races, sometimes had characters talking back to the narrator and answering his questions. And WB characters sometimes addressed the audience, e.g. Elmer Fudd asking everyone to "be vewy quiet. I'm hunting wabbit."

It was a running gag in early Silver Age Superman (and Superboy) stories to have Clark Kent wink at the readers, usually while making a joke or pun about his secret identity. Lois Lane or Lana Lang would say something like, "I wish you had been here to see Superman defeat Luthor." And Clark, with his back to her, would wink and laugh, "Too bad I always seem to miss the excitement." But the gag was always in the last panel, when the story was ending, anyway, so it was not too intrusive.

Bob Hope and Groucho Marx often addressed the audience directly. I was OK with it in moderation, but, IMHO, they sometimes overdid it. Beyond a certain point, if the actors don't bother to maintain the illusion, then the audience can't maintain the suspension of disbelief, and will lose interest.

In a serious strip, TC, if it starts with a character addressing the readers in order to share a story with them, and it ends with that character wrapping things up (like Tales Of The Watcher and House Of Mystery for example, then I think that's okay because it's built-in to the premise of the strip from the start. However, if you had Reed Richards in the middle of FF #1, suddenly looking out of a panel and saying "What do you think of that Mole Man, readers - isn't he a villain?" then it would be right out of place.

I just think that the 'reader's voice' angle in humour strips is the easy way out, and is over-used to the point of tedium. Why not just have another character ask the question and maintain the illusion of the stories being 'real' (if you know what I mean), rather than a performance being put on for the benefit of readers? I just feel that it's overdone. There are always exceptions of course: The 'Dare-A-Day Davy' strip in Pow! broke the 'fourth wall', but it was built-in to the premise from day one, because Davy was accepting dares from readers and the ensuing story showed the repercussions of doing so.

Although, I don't think I minded the 'reader's voice' in british humour comics too much, back in the day. It made me vaguely aware that there was some guy out there, writing these comics, trying to put words in my mouth as well as the character's. Though mostly, the 'reader' felt like another, unseen character in the strip; and thinking about it now, there's more of a weird, existential, 'Inception'-style feeling of a comic within a comic.

All it needs to complete the rabbit hole is, say, Dennis the Menace reading his own strip in the Beano, while the 'Reader's Voice' speech balloon says something to him, which is read by an actual flesh-and-blood person... Did I say 'complete'? Man, it could go on forever, like standing between two mirrors, or between a TV camera and it's output monitor.

I'm going to lie down now.

I don't think I'd even have noticed the 'reader's voice' label if it had been done sparingly, but there must've been a time when I read several strips (in different comics) in a row, all indulging in the practice and thereby becoming impossible not to be aware of. It's just such a lazy device when you think about it. I'm going to lie down now too, WJB. In a darkened room.

I never minded the 'readers voice' but what used to mildly worry me was when an artist would draw their hand drawing the strip.

As a youngster I found that really unsettling and creepy, even now it feels like the sort of thing you'd find in a Philip K Dick novel rather than a kids humour comic.

Yeah, it makes no sense when you think about it. Drawings talking and reacting (and speaking) to the artist drawing them. That never bothered me too much though, because it's not something that happened very often. The 'reader's voice' on the other hand... doh!