BOYS AND THEIR TOYS... 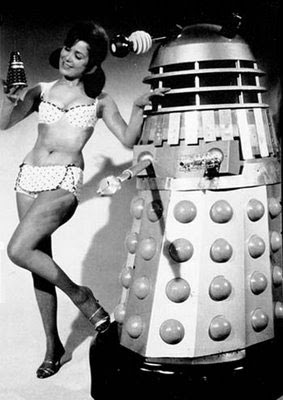 One disadvantage to being an adult collector of childhood toys is that you can't really play with them, you can only look at, handle, and admire them - and perhaps even luxuriate in simply owning the items.  If you attempt to play with them, it's done in an embarrassed, self-conscious, "I'm glad no one's watching" manner that you're almost relieved is over when the toy is carefully returned to its box or space on the shelf.

Y'see, a grown-up switching on his reacquired MARX Bump 'n' Go DALEK is only trying to recall how he felt as a child seeing its flashing light for the first time.  As a kid, he could amuse himself with it for hours;  as an adult, a few seconds of watching it bump into the skirting board and change direction is enough for him.  A memory has been reignited, which is the whole reason for now owning the toy.

I've replaced numerous toys over the last 35 years, and I've now had most of them for many more years than the originals.  The majority of kids usually only have any particular toy for a year or two at most, and though it seems in retrospect they owned every toy at the same time for years, the truth is that many were consigned to the dustbin or jumble sales long before their successors ever took a bow.  (True, some kids looked after their toys and stored them in the loft when done with them, but most toy hordes were in a constant state of ebb and flow.)

When THUNDERBIRDS enjoyed a resurgence in the early '90s, I bought some of the toys released at the time.  True, they weren't actually ones I'd owned as a youngster, but it was easy to imagine they were on account of them bearing forms familiar to me from childhood.  I'm staggered to realise I've now had them for a quarter of a century - far longer than any item (with a couple of exceptions) I ever owned in my youth.  Yet it still seems as if I had my childhood toys for far longer than the ones I bought in the '90s.

Anyway, as I said, I find that staggering.  Can anyone out there relate to that?
Posted by Kid at Wednesday, November 29, 2017

Nostalgia from one's childhood is important. I recall aged 7 building with my dad a Bristol Bulldog model kitset.The original disappeared many years back to the place of gone forever toys. But since then I located 10 years ago the same kitset on eBay assembled it and now it sits on the shelf.

Hope you kept the box. I've got a few replacement models from childhood that I've yet to build. One day. It's a good feeling to reacquire a childhood toy or comic, eh?

I assure you, i'd have no problems enthusiastically playing with any of the three toys pictured. The only time i run into "can't really play" problems is that i'm no longer willing to break (burn, explode, destroy, etc.,) toys in epic confrontations as we might have done as children. Too expensive to replace them now, eh?

We never saw the Bump 'n' Go Daleks over here. There were other Marx B'n'G toys, but the Daleks would have been very cool to find.

That's a 'Bump 'n' Go' Dalek the actress is holding in the photo, 3. A company called Dapol reissued them back in the '90s, and you'll find them for sale on eBay - as well as original ones. I've got one of those three items in my collection - now I need to add the other two.