Here's one I picked up fairly recently.  It came out in 2011 (so it's not a new release) and I already own most of the individual issues of which this book is comprised, but it's always good to have a run of comics in one handy collected edition.  It features the early BATMAN tales drawn by legendary artist GENE COLAN after he jumped ship from MARVEL to rival comicbook-makers DC back in the early '80s.

I haven't read these tales since they were first published, but so far, I've enjoyed what I've re-read.  Gene was a superb artist, but unfortunately his eyesight was very poor, and sometimes at this stage in his career, his figure-work was a little off in places.  (Take a look at Batman's left leg in the pic below - it just doesn't look quite right.)  However, instances of this kind aren't too many in the enclosed tales, and there are great visuals on offer between the covers  of this hardback tome.

It shouldn't be difficult to track down a copy, so if you have a bit of spare cash, begin the process right away.  Now you'll have to excuse me - I want to get straight back to reading my own valiant volume of these 14 dazzling and dynamic Dark Knight Detective doozies.  Sometimes life is just so good!

And hey - who else prefers that DC emblem on the cover to the current one?  It surely can't be just me? 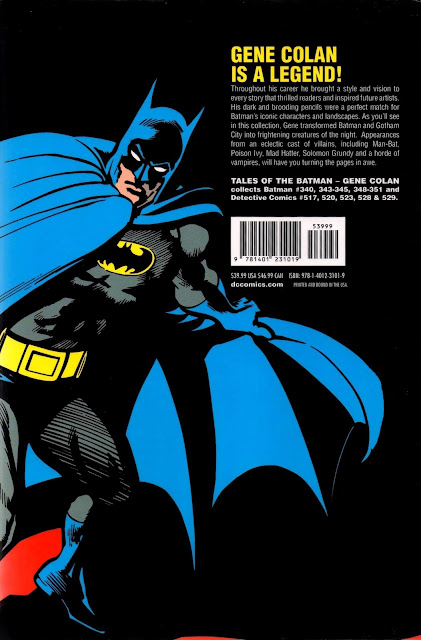 I had always wondered how Gene Colon would do with Batman, and he didn't disappoint. I enjoyed his tenure. All this came about during the last couple of years I was reading comics, but Batman and Detective Comics were two of my mainstays during that period. You had Colon illustrating one and Don Newton the other. Those were GOOD times to for both of those comics.

Not sure I've ever seen any of Gene COLON's work, G, but if it's half as good as Gene COLAN's, then it must be pretty awesome. (Couldn't resist.) I loved Don Newton's art on Batman, especially when it was inked by Alfredo Alcala - what a team. Of course, the BEST Batman artist was Bob Kane. (In his opinion I hasten to add, nobody else's.)

My first exposure to Batman was during the Neal Adams and Jim Aparo years, but Gene was a natural fit for the title! - once he'd moved from Marvel. Enjoyed his work on Sub Mariner, Daredevil, Captain America, Iron Man and especially Dr. Strange and Tomb of Dracula back at his old company. Yes this is one of the few instances where I actually have the volume you are showcasing. A good read as you say, once you get used to the fact that it jumps an issue or two in sequence that 'genial' Gene did not draw. And would it have killed them to have a contents page at the front? Reminds me, I must track down some of the other Batman volumes, Newton and Aparo. Have the Adams Batman collections which I enjoy, at least the re-colouring of many of the stories wasn't as heavy-handed as the Dark Horse Conans - but they left the covers as they were.

Stupid auto correct. First time I typed it, it corrected to "Colman." :)

Don Newton was another whose work I'd seen elsewhere (with the Phantom) and I wondered how he would work on the Dark Knight. Over the years, Bats has had some great artists, but that was a pretty peak period, and both had great inkers during their tenures.

I do enjoy those old Batman stories with Kane art. Just got one of the Joker collections for my birthday and the first Joker story was in it with Kane art.

To be frank, I expected more from Colan on that run of Batman stories. He'd been so nifty on Dracula that the dark atmosphere of Batman seemed ideal. But his inability at times to bring clarity to action sequences hurt the storytelling in my estimation. I'm a Colan fan for sure, but his Batman work is not among my favorites of his work.

What - no mention of Howard the Duck? Actually, the book DOES have a contents page, PC - you must've turned over two pages at once. I've got the Adams' Batman volumes as well, but some pages have been 're-arranged' and some sound effects re-lettered. Also, some of the covers have the prices missing, because they were used for single-issue reprints before being pressed into service for the three volume set.

I also enjoy some of those old Batman stories with Kane's name on them, G, but Jerry Robinson seems likely to have been responsible for more of the art than Kane. They certainly do have atmosphere 'though. Dick Dillin was also a good Batman artist in the '70s.

I'd agree with you that Colan wasn't always firing on all cylinders at this time, Rip, but his eyesight was so poor (he had to draw with his face right up against the art board) that it's a wonder he could draw anything at all. Some of his figure work and perspectives are a little dodgy, but he still manages to imbue it all with loads of atmosphere ideally suited to the world of Batman. Years later, after an operation to improve his sight, he was actually drawing a lot better, even 'though he was by then quite elderly.

Yep, sure enough the old two pages at once trick! Contents page was there all the time. Been a while since I took this one down from the shelf, which I did for a quick re-appraisal on seeing your feature on it. Agree with you about the DC logo - do not like the new peeling price sticker one at all. I have the four volumes of the Flash Chronicles that were published (before either the money ran out and / or sales did not warrent more) and half have the logo the Batman volume has and the rest the new one we are maybe not so impressed by.

I don't have any of The Flash Chronicles, but I do have the first Flash Archives edition. I'd like to get the Carmine Infantino volume of Batman tales, PC. That looks like a good one. And the Don Newton one.

I always thought the DC logo used on that cover looks like it belongs on a box of detergent, not a comic. Still prefer the late 70's dynamic logo.

Either one of them is better than the current emblem, Jeff.

While a big Colan fan ( I have a few pieces of his orginal art) his Batman stuff was just a bit off enough that you would go ... Huh. That doesn't look right. Also the rather muddy reproduction in newsprint on blacks rather hurt his style.
Nevertheless I would get this collection just for his artwork.

I miss comics printed on newsprint, Phil. The modern glossy pages don't have quite the same charm for me. As for this volume, it's well-worth having ('though it's got glossy pages).

Hmm. I should have said the not so good printing on newsprint. In fact I like plain paper more than glossy but the bleeding and off kilter colours on old comics really detracted an artist used lots of black. On the other hand black on gloss paper is abominable as the reflection makes it unreadable. When it's well printed on plain paper like a Tin Tin comic, then plain paper is much better.

I liked the paper that DC used in its Archive Editions - matt, but good quality. I've noticed that Marvel's hardback Masterworks and Omnibus volumes, the paper isn't glossy, but the ink printed on it IS. The light reflects off the images (making them hard to view), but not the white areas on the paper itself. Odd that.