Hell's bells!  Has it really been 40 years since I first read these DC comics as a mere callow teenager?  Someone tell me I'm wrong - even if it's an obvious lie.  I obtained replacements of the first two issues a good number of years ago now, but I received the second two mags only this morning.  You may be wondering why it took me so long to get around to it, and the answer is that all four stories are reprinted in The GREAT SUPERMAN COMIC BOOK COLLECTION, a book which was published back in 1981, and which I own.

However, it's great to read through the original comics and see not only the story-pages, but also ads for other mags and various items which reflect the heady days of the '70s.  The story itself is an intriguing if slightly convoluted one (with an obvious plot-hole), and the fourth episode seems to have shoe-horned in a number of classic Superman foes under the guise of being intrinsic to the story's resolution (but is clearly nothing more than an blatant sales ploy).  Would aliens out to destroy Earth really be prepared to wait 30 years to do it, and wouldn't the bad guy have a better plan to ensure his escape?  It all seems rather unnecessary on reflection.

But, as I said, it is intriguing - and, more importantly, thoroughly entertaining.  Written by CARY BATES & ELLIOT S! MAGGIN, and drawn by CURT SWAN & BOB OKSNER, it's an instant classic that every true Superman fan should have in their comics collection.  See CLARK KENT punch STEVE LOMBARD in the mouth!  See Clark snatch MORGAN EDGE's stogie from his gob and extinguish it in his drink while telling him where to get off!  And, what we've all been waiting for, see Clarkie-boy have LOIS LANE swoon with desire for him in a way that she never did for the mighty Superman.

Take it from me - if you don't have these four-issues, you need to get onto ebay right away and track them down!  You shouldn't have to live the rest of your life without them! 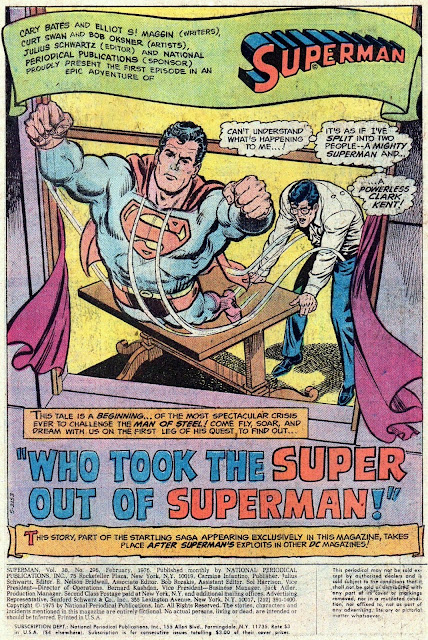 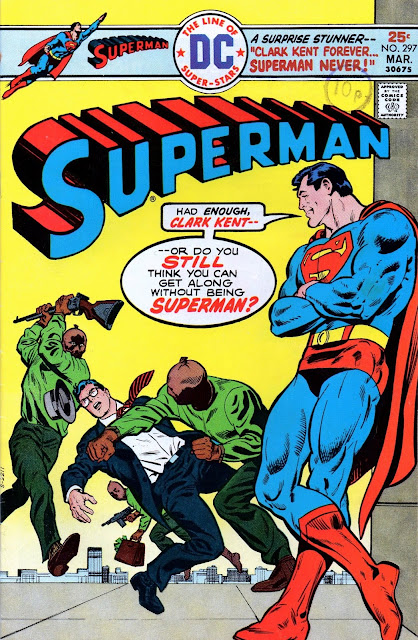 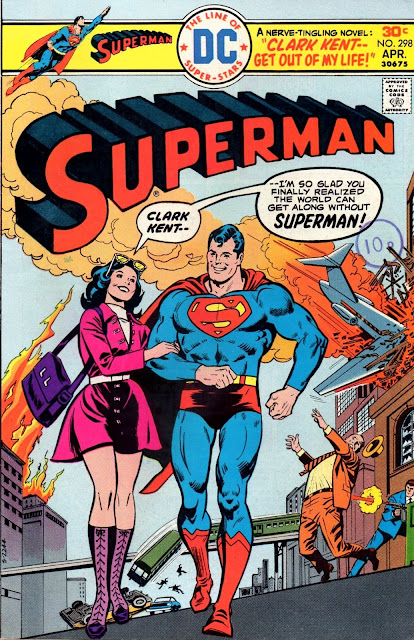 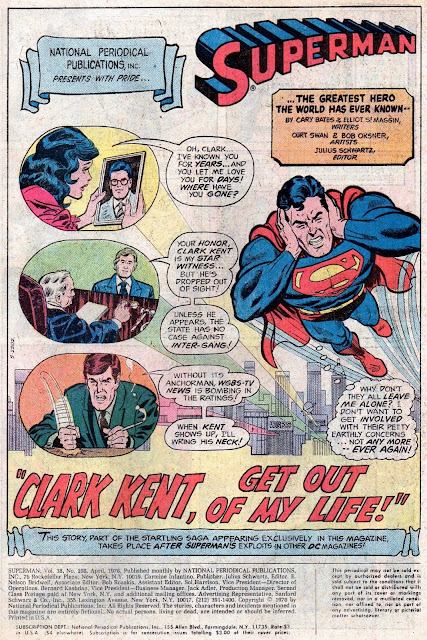 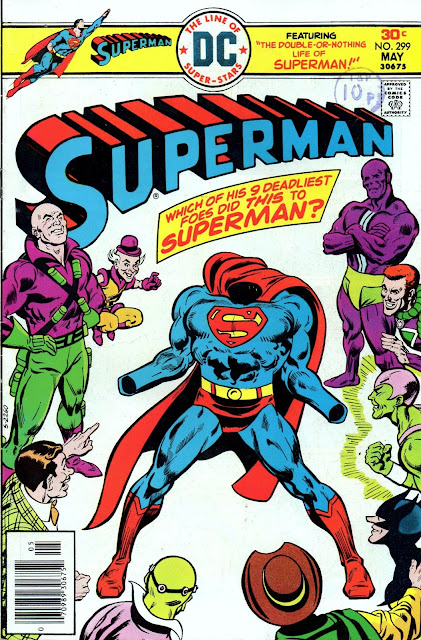 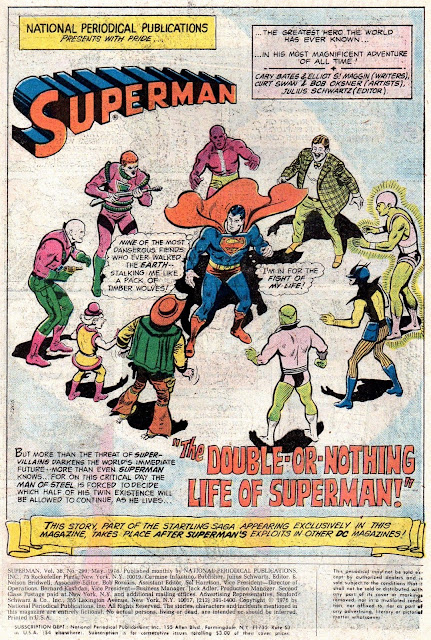 You see, writers who complain about writing Superman don't understand him. Sure some of these stories seem a bit goofy now, but the characterizations of Clark , Superman , Lois , Jimmy and the gang are spot on. The god like aspects of Superman are secondary to Clark being a guy from Kansas who has superpowers and Lois ignores him. That's the essential paychological appeal, he is our inner nerd. He is us. And that's what modern comic book writers don't understand.

Problem is, Phil, those writers 'grew up' and forgot the magic that had made comics so appealing to them when they were kids. They wanted comics to be 'mature' so that they needn't feel embarrassed reading or producing them. Result? Fewer readers.

This serial took place "exclusively" in Superman's own self-titled comic, and after his adventures in concurrent issues of Action Comics, World's Finest, et al. IIRC, it was the same with the sand creature saga in Superman #233-242. Today, it would tie in with all Superman Family titles, and probably with everything else published by DC, in a line-wide crossover.

And, yes, today's creators (and I use that term loosely) have delusions of grandeur. They think they are Great Artists, and have no interest in simply producing entertainment for us common peasants.

Couldn't swear to it, TC, but I seem to remember there was the odd passing reference to the sand creature (or at least Superman's condition) in other titles. Incidentally, the sand creature appears again in a recent comic, but I forget which one.

Comicbooks became art purely as a result of contributors' trying to entertain the readers. When comicbooks TRY to be art, they very often fail to entertain.

I'd love to read every one of them right now!

I re-read all four of them this morning, JP. Super.

One of my favorite stories! I recall the local news in Los Angeles covering the part where Lois appears to have spent the night at Clarks place. They would reprint the panels with Clark and Lois on the couch as the daily broadcast ended (remember that?) and the panels of the next morning at work where Lois is in a great mood, singing and putting flowers on Clarks desk. Mature readers needed? :)

Thanks for reminding me of this story Kid!

I do indeed remember that scene - some great dialogue from Lois. These four issues are hugely entertaining. A pleasure to have prompted your memory, Gene, and thanks for dropping by.

My pleasure, Kid. I'm always drop by even if I don't comment. :) I will be in Edinburgh next week. Since you always mention Forbidden Planet, I'll make sure to stop by their store on Southbridge. :)

Enjoy your visit to Edinburgh, Gene, and make sure you get a tour of the Castle. Glasgow's also a great place to visit, so mark that down as a future destination the next time you're in the U.K.

Thanks! We have visited Scotland the last three summers. Drive everywhere. Aberdeen, to Elgin, Fort Williams, Killin, borders, etc. Haven't done the island though. Glasgow was on our first visit. Really enjoyed it. Stayed right by the City Centre. Loved the views from the Necropolis. Honestly haven't found anything about Scotland we didn't like! Sorry, turned this into a travel comment section.

Don't worry about that, Gene. Someone singing the praises of Scotland is nothing a Scotsman is ever going to object to. Have a great holiday.