Let's take a little detour from our regular SECRET ORIGINS series and cop a gander at the covers of the original mags from the '60s that started the ball rolling. First up (above) is the SPECIAL GIANT ISSUE from 1961, followed by the 80 PG. GIANT #8 (below) which, despite its numbering, was the second issue in the 'Origins' series and which was released in 1965.

A new series appeared in 1973 and lasted seven issues, and you can see the covers by clicking this link.  At the foot of this post are the replica editions of the two comics shown above and below, the first from 1998 and the second from '99. DC COMICS issued a follow-up issue in the style of the two '60s mags in 2003, and I've included that for good measure so that you've got all three.  I'm not one to do things by halves, as you can see.

Anyway, have fun comparing the two original covers with their replicas, and leave a comment if you have any interesting thoughts, theories, or observations you'd like to share. 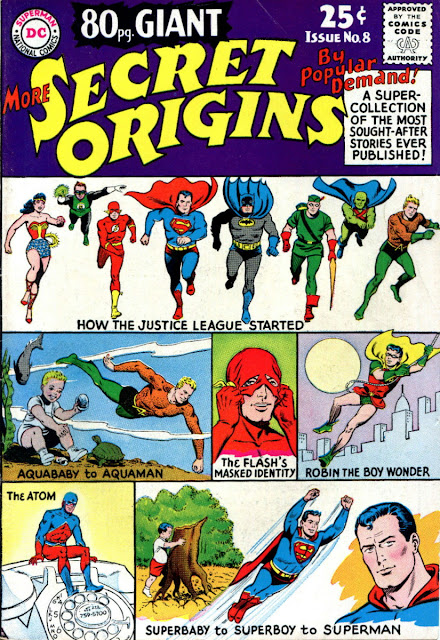 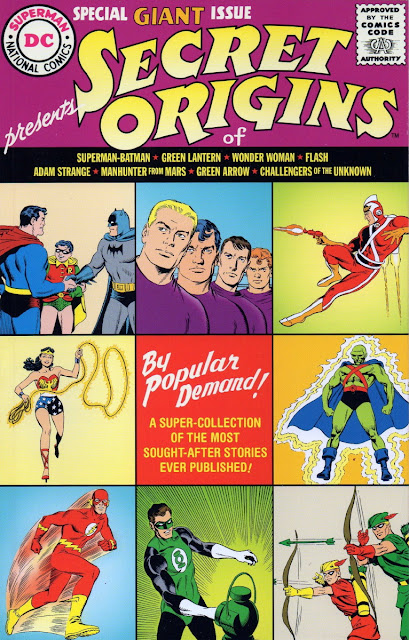 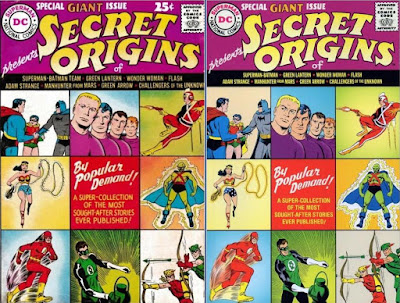 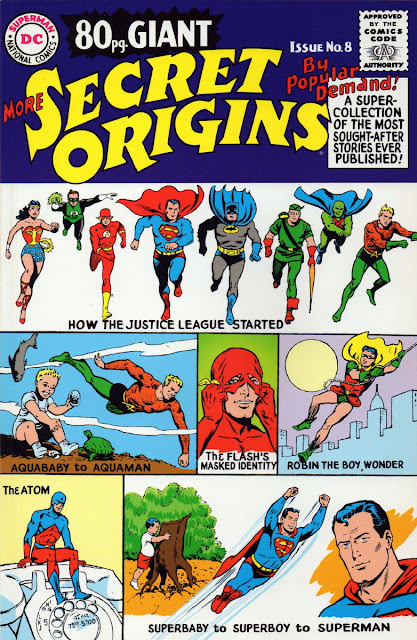 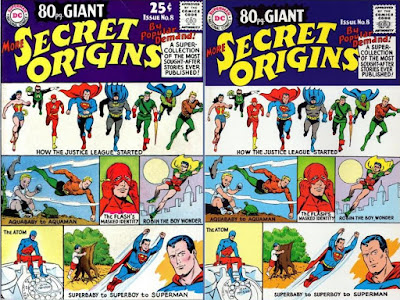 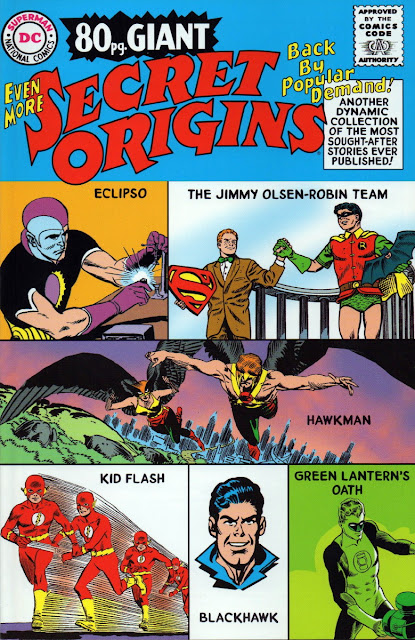 Got that last one as the reprint. I dont have the second one but I do have the Aquaman reprint and read the story as a kid. It's definitely a good example of why I like Aquaman and Ramona Fradon's Art. She still draws very well and does commissions and goes to San Diego at at 90. I love how she draws and it's a good contrast to Curt Swan whom I also liked a lot.
I felt the weakest stories were Green Lantern, they didn't make much sense which is odd since the Flash was much better.

Loved Ramona Fradon's art on Metamorpho in the '70s. I wasn't familiar with the name 'Ramona' and thought it was a man's name at first (just like I did with Richmal Crompton). It was a few years before I discovered my mistake. Good to hear that she's still going strong.

The originals were a little before my time, but I had the replica editions.

Later, they regularly published annual or semi-annual reprint editions of their ongoing titles, labeled "80-Page Giants" in the 1960's. In the early 1970's, page count was reduced to 72 or 64 pages, and then they were labeled "DC Giant" or "DC Special."

"Ramona" sounded like a female name to me, but, for years, I wasn't sure. But there were never any doubts about the quality of her work.

Thanks for explaining the numbering system so succinctly, TC - it saves me from having to try in my long-winded fashion. Back then, I suppose I just thought Ramona was a foreign name for a guy, mainly because, Marie Severin aside, I just assumed it was guys who drew superhero comics. Nowadays, Ramona sounds distinctly feminine to me, probably because of the song of the same name.

There's something of unabashed fun about these books. I don't have the originals but I did pick up the replicas as they appeared. I recently found them in a trade collection and came in a hair of buying them again, but held back.

DC’s 80/100 page specials were always magical to me as a kid and still look out for them at marts etc (but they can cost a small fortune) Ramona Fradon 's work on Plastic Man and Matamorpho was always top notch as was her occasional work on DCs mystery books - hard to believe she is 90 years old all the same.

There's something really alluring about those old Secret Origins comics. Reading them feels like you're being let in to some lost world of the past full of wonder and possibility. The late 80s series started to feel to me like an encyclopaedia toward the end though. Btw Kid, there's a story in one of the last issues with the origin of Ferro Lad that's well worth a look: Curt Swan drew it, and its a surprisingly touching story.

As for Ramona Fradon, I think I always recognised it as a female name, but I did think Win Mortimer was female- think I assumed it was short for Winifred and was surprised to learn he was a he. I'm pretty sure that, around 8 years old, when I read a reprint of an old Silver Surfer comic, I wondered if the credited artists, John and Sal Buscema, were brother and sister or husband and wife... Oops.

Still, confusing as it may have been to us once, think how baffling it must be to people discovering the sometimes-entertaining 'pop group' Fleetwood Mac, who have a male singer called Lindsey and a female singer called Stevie...

If it comes up again, Rip, grab it with both hands. These stories are a gateway to a more magical age.

Indeed, PM. Let's hope she has another 90 years ahead of her. (In fact, us too.) Yup, those giant issues were certainly 'special'.

I'll read that tale when I get around to scanning it, DD - thanks for the heads-up. Yeah, Sal does seem like a girl's name, true enough. His real name is actually Silvio 'though, so Sal is a nickname.

And the lead singer in Missing Persons was named Dale and her husband was named Terry. Or maybe it was the other way around.

I once mentioned Stevie Nicks, and one of my older co-workers said, "Who is he?"

It's kind of cool how Stevie has her ex-boyfriend, Lindsey, standing there playing the guitar while she sings lead vocals. And half of the songs are about what a shmuck he was.

And Johnny Cash once told me about a boy named Sue, TC. And what about Jordan? It's used for males AND females.