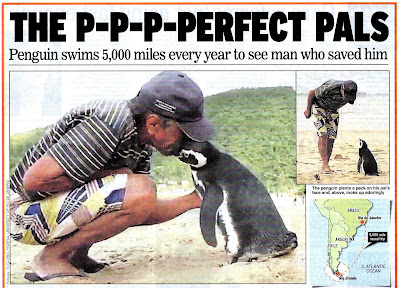 Saw this great story in The DAILY EXPRESS by LAURA HOLLAND back in March and thought you might enjoy it. 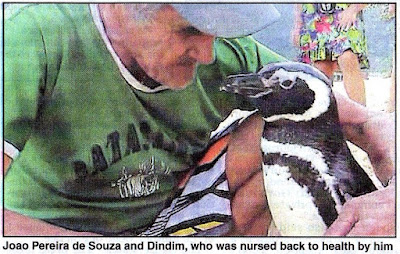 When an elderly fisherman picked up a stricken penguin he never thought they would be best pals for life.

Now his feathered friend swims 5,000 miles each year to see the Brazilian man who nursed him back to health.

Retired bricklayer and part-time fisherman Joao Pereira de Souza saved the penguin after he found him on rocks in 2011.

The black-and-white bird was starving and covered in oil and Mr. de Souza spent a week cleaning his feathers.

He named the penguin Dindim and rebuilt his strength by feeding him fish before releasing him back into the sea.

But loyal Dindim did not want to leave and spent another 11 months with the fisherman in his village on an island near Rio de Janeiro.

He disappeared after he had grown new feathers - but astonishingly returned the following June.

Magellanic penguins usually live along the Atlantic and Pacific coasts in the cold waters off the southern tip of South America, but some end up as far north as Rio.

Experts believe that climate change is causing colonies to move farther north to be nearer to fish.

Despite numbering in their millions, the species is listed as near-threatened owing to oil spills which kill more than 40,000 a year off the coast of Argentina alone.

The flightless birds, which live for about 25 years, are known for their loyalty and mate for life.

Experts believe Dindim goes to breed off the coast of Argentina and Chile before making the 5,000 mile round trip back to Mr. de Souza.  A recent video has captured the pair's love for one another, showing the penguin just like any other affectionate pet.

Dindim is seen nuzzling up to the 71-year old and playfully pecking his face.

"No one else is allowed to touch him.  He pecks them if they do.  He lays on my lap, lets me give him showers, allows me to feed him sardines and to pick him up."

He added: "Everyone said he wouldn't return, but he has been coming back to visit me for the last four years.

"He arrives in June and leaves to go home in February and every year becomes more affectionate as he appears even happier to see me.

"I'm flattered Dindim is happy to exchange his home with thousands of other penguins every year to find his way here to spend one-to-one time with me.

"It's a very special relationship."

Biologist Joao Paulo Krajewski, who interviewed Mr. de Souza, said: "I have never seen anything like this before.  I think the penguin believes Joao is part of his family and probably a penguin as well.

"When he sees him he wags his tail like a dog and honks with delight."

Mr. Krajewski said professionals who work with animals try to avoid forming bonds in order to reintroduce them into the wild.

But he added: "In this isolated case the authorities allowed Dindim to stay with Joao because of his kindness."

I already knew about this because I read it on the internet at the time - it's very touching but let's hope Mr. De Souza outlives Dindim or the poor little penguin might turn up to find his human friend no longer around.

In that case, CJ, his neighbours would probably give it a very warm welcome - at one of their communal barbecues.

Yes, Kid, they probably would but Dindim isn't interested in anyone else - he pecks them. It's tragic to think of the little fella searching forlornly for his friend and not understanding that he's gone forever. Let's hope it never happens, eh ?

I meant as part of the menu, CJ, but I was only joking in order to avoid pondering the sadness of the situation you describe. Of course, Dindim could be eaten by a whale or a shark on his way to or from Joao's place, so it could be the old man left pining for his lost friend without ever knowing what happened to him. Let's hope they both live happily ever after.

Well, Joao's 71 and penguins live for around 25 years, so, barring accidents for Dindim, it seems likely that he may outlast his human friend, PM. However, let's hope there's a happy ending for the pair of them.

Oops, I didn't get your joke there, Kid - I thought you meant the neighbours would look after the penguin and give him fish etc. But we don't know how old Dindim is - maybe he's over 20 already so perhaps Mr De Souza will outlive him - and did you know that the word "penguin" is believed to come from Welsh ?

Story of my life, CJ - no one gets my jokes. Nope, didn't know that about the word 'penguin', but I do now.

Aww that is beautiful.

Yeah, quite touching, LG. If only humans could get on like that, eh?