Here's a puzzler.  I've always thought that I left school in December 1974, yet I have a clear 'memory' of looking at #2 of DC's JUSTICE Inc. in English class one day, in the annexe huts at the back of my school's 'Old Block'.  Problem is, this title didn't come out until '75, so I wonder if I might actually have gone back to school after the Christmas holidays for a few months.  It's probably just a false memory, arising from the fact that I drew The AVENGER's face on the inside cover of a paperback edition of Alistair MacClean's FEAR IS THE KEY.

You see, I read some of the novel in the same classroom and seem to remember drawing the face at the same time - which I couldn't have done if the comic didn't come out 'til '75.  So I must've done the drawing after leaving school, but because I link the book with the classroom, my memory naturally makes the same connection as regards the drawing.  And, as the drawing is of The Avenger, I likewise mis-associate the later comic with that earlier time.  The mind tends to play tricks with the memory in that way on occasion, don't you find?

However, you're not interested in any of that p*sh!  No, you're only here for the covers, so gracious as ever, I'll shut up and let you get on with looking at them.  Two KUBERTs and two KIRBYs - I sure do spoil you and no mistake!

Y'know, I have to be honest and say that Jack Kirby's art in issues 2-4 isn't that great.  It looks rushed and even more 'cartoony' than normal for this period of his career, as if he wasn't much interested in the character and was merely knocking out the pages in order to meet his monthly quota.  Of course, it's always possible that he was filling in for another artist at the last moment and had to turn them 'round faster than usual, but they're far from being his finest moment. 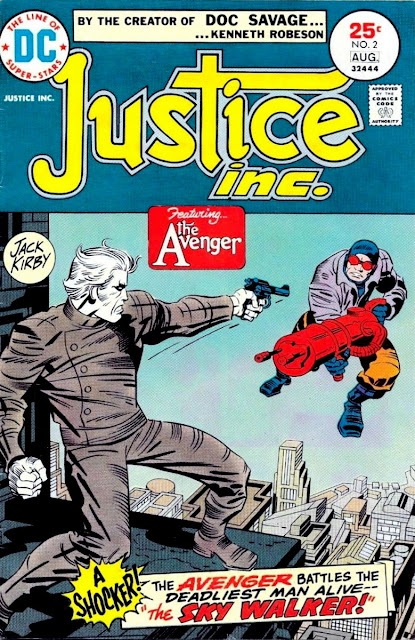 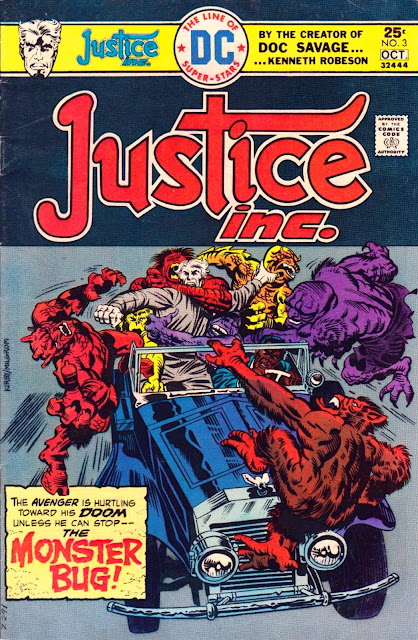 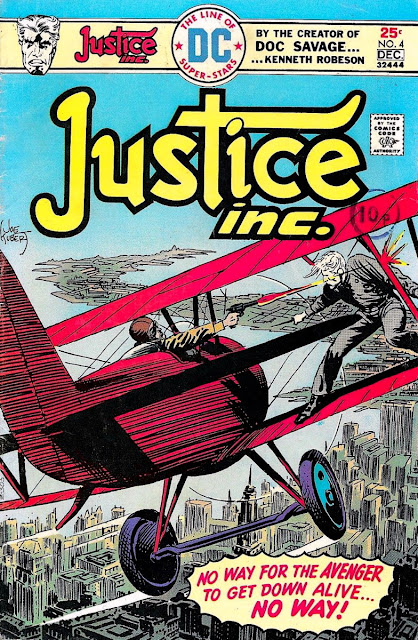 Bonus:  Below, the unused cover art for #1 by interior artist AL McWILLIAMS.

This is a title I know nothing about. I had heard of it and thought that it was a spin - off from JLA, like JLI & Infinity, Inc.
But I see that is not the case.

There were only four issues, JP - straight on to eBay with you.

Have you seen the Alex Ross redo of that Kubert cover ? And the civers for Dynamite ? Very nice indeed

I have these,they are okay although I would have preferred the original artist,Al McWilliams, continue rather than give it to Jack Kirby.
Its not often I say that.

I also have another
set of two,art by Kyle Baker from 1989 interesting art.

I was able to find #1 at the local grocery store when it was published, but for some reason I never saw the remaining issues until many years later. I did get a few of the 70's-era paperbacks on ebay several years ago. Pretty entertaining series.

I remember picking up issue 1 after school on my way home in a newsagents in Hamilton (that is still there). I can till remember being disappointed by the art and story (although to be fair my expectations were not high to begin with) . I managed to pick up issue 3 (still bland imho) and even although I saw issues 2 and 4 I never bought them, (in those days you tended to pick up any US comic you saw). It was a shame for Kirby I don't think DC knew what to do with him at this time, his art style was looking old fashioned and I think these old pulp heroes were not as "hot" as DC may have thought certainly in UK I had never heard of this character.

I must track down some Justice Inc books, G, because I enjoyed the Doc Savage ones.

I'd never heard of the character either, PM, but sales in Britain would never have been a make-or-break factor for a DC or Marvel comic, I wouldn't imagine. Kirby's art at this time was too cartoonish and he was going in the opposite direction, art-wise, to what readers were looking for, in the main. (Apart from die-hard Kirby fans obviously - the same people who thought that Hunger Dogs was an artistic masterpiece.) I can't help but have a nostalgic affection for them though.

The comic, like the original pulp magazine (1939-1942) and the 1970's paperback book reprints, had a cover blurb saying it was "By the creator of Doc Savage." Actually, the pulp stories were written by another writer using the same house name, "Kenneth Robeson." Although Lester Dent (the creator of Doc Savage) and Walter "Maxwell Grant" Gibson (who wrote most of the Shadow pulp stories) may have contributed some ideas.

The character was a pale imitation of Doc Savage, and never became as popular as Doc or the Shadow. I never really got interested in either the book reprints or the comic.

The Avenger/Justice Inc. guest starred in DC's The Shadow #11.

In a way, it's odd that DC would mention Doc Savage on the Justice Inc. covers, since, IIRC, the Doc Savage comic and/or B&W magazine was being published by Marvel at the time.

That was quite common back then, TC, and probably still happens today I'd guess. Robert Arthur, who wrote the early Three Investigator novels, would give other writers ideas for stories and then edit them, I believe. True, those stories weren't credited to Robert Arthur, but it was kind of the same idea. I've read a few Doc Savage books and enjoyed them, but I've never read any of The Shadow. Must get around to doing so one day. I guess DC were capitalizing on the presumed success of Marvel's Doc Savage, hence the name-check on the cover of Justice Inc.