PART FORTY-TWO OF FAVOURITE COMICS OF THE PAST - SHOWCASE #94 (EXPANDED)...

Apparently (if I've got my comics history right), SHOWCASE #94 was originally intended to publish the first appearance of JACK KIRBY's ORION Of The NEW GODS, until DC COMICS decided to give the series its own title.  Because of that, the last issue of Showcase was #93 in 1970.  Number 94 eventually turned up in '77, featuring the debut of The New DOOM PATROL, who also starred in #s 95 & 96.  Incidentally, ROBOT MAN's new body was inspired by JOHN BYRNE's character - ROG-2000.

And now for the eagerly anticipated (cough) personal bit.  On the Saturday I first bought this issue, I was making my way home just as it was getting dark, and took a detour through the grounds of one of my old schools.  On the far side of a putting green adjacent to the school grounds was a small wooded area, the silhouette of which, it seemed to me in the gathering gloom, was the perfect double of the background on the comic's cover.  That's why, even today, I can't look at one without also thinking of the other.

Hard to believe that was very nearly 40 years ago.  My old school is now gone and a new structure stands in its place, but the one I knew yet exists in the evergreen land of memory - especially when I look at the cover of Showcase #94.  Got any memories associated with this ish?  Then get typing, frantic ones. 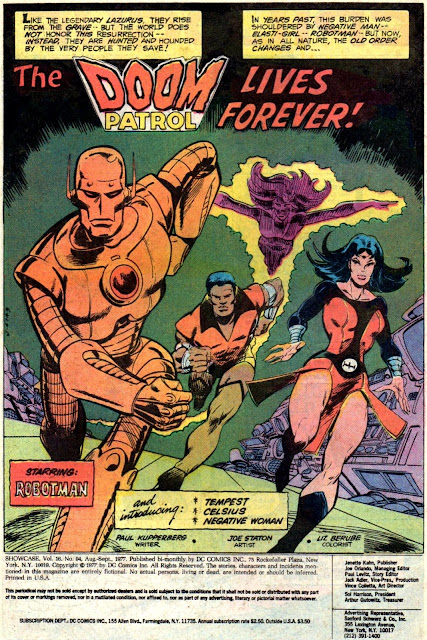 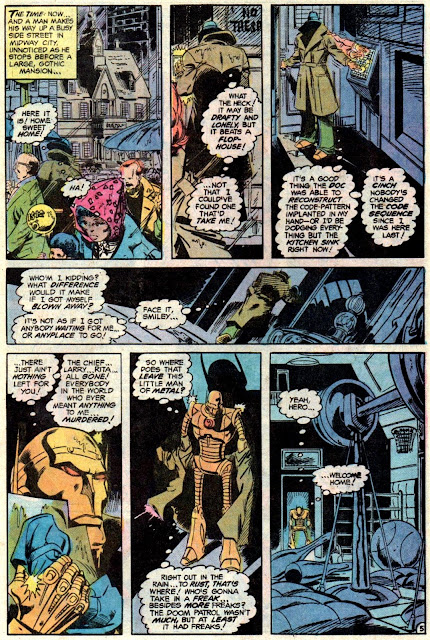 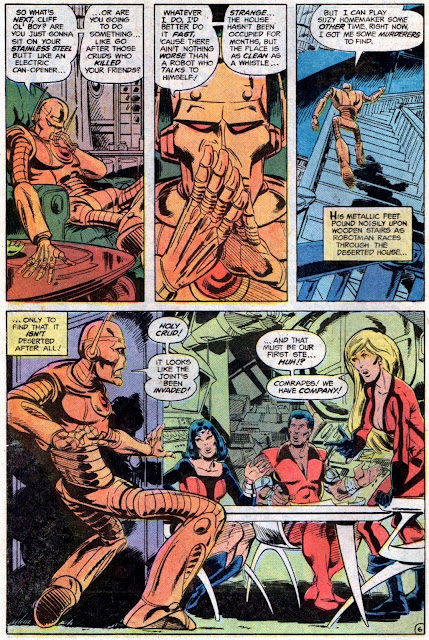 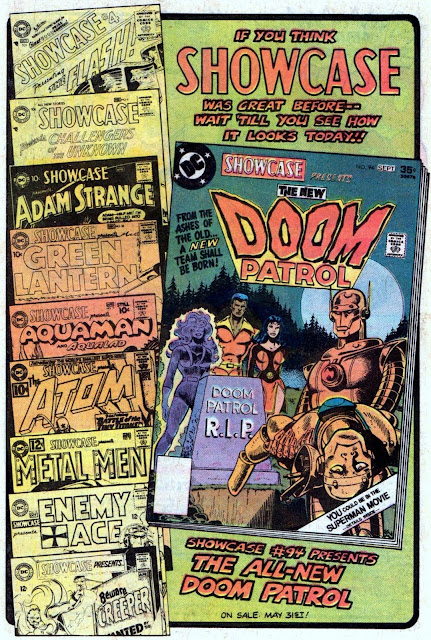 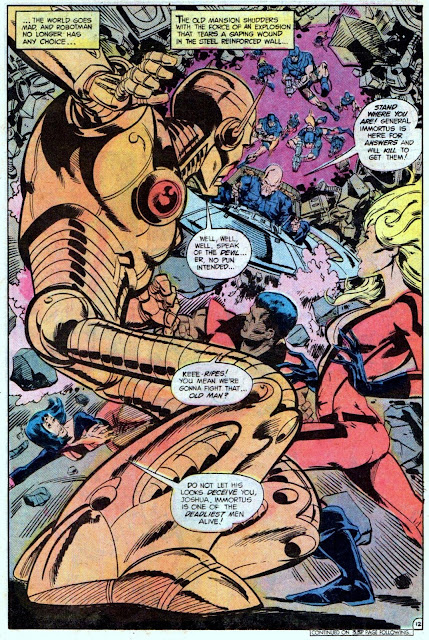 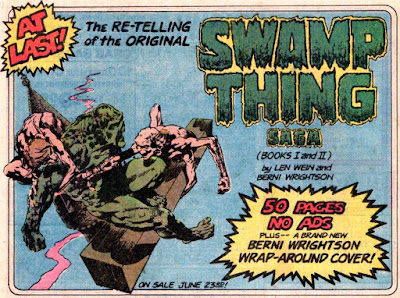 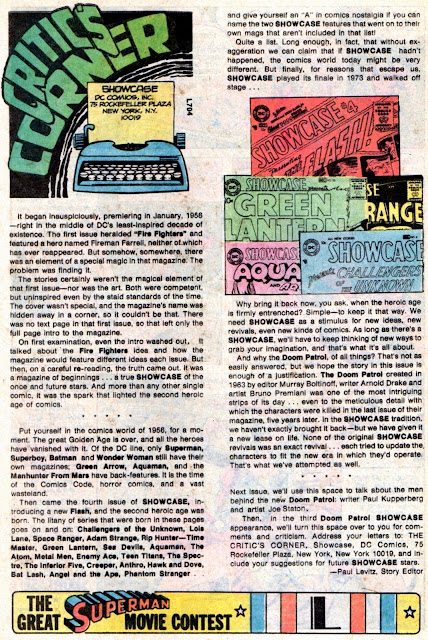 I've had replacements for issues #94 & 96 for years now, but since first writing this, I've acquired #95 to complete the trilogy.  I've therefore added their covers and splash pages to this post so that all three issues are together.  I seem to associate these mags with the same newsagent's I bought #94, so that's more than likely where I originally got them.  Enjoy. 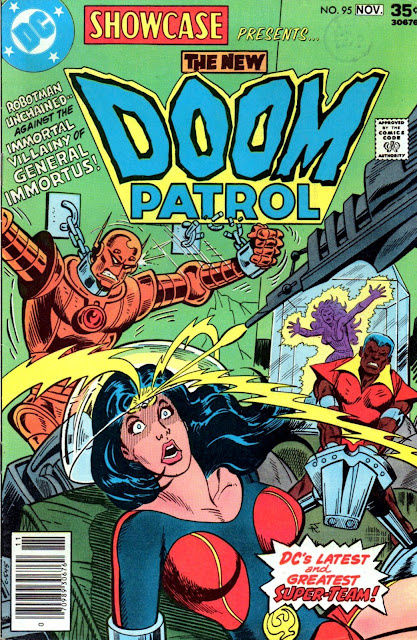 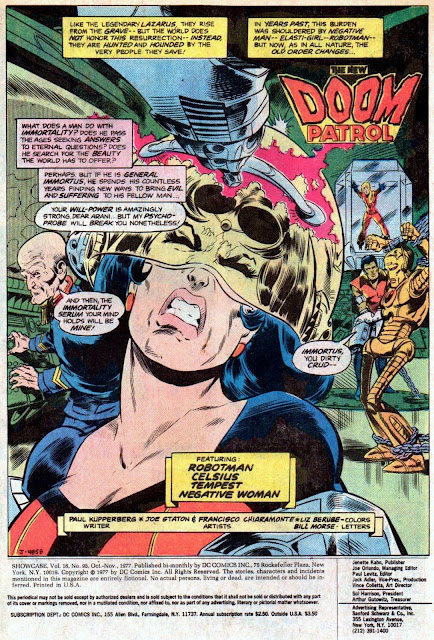 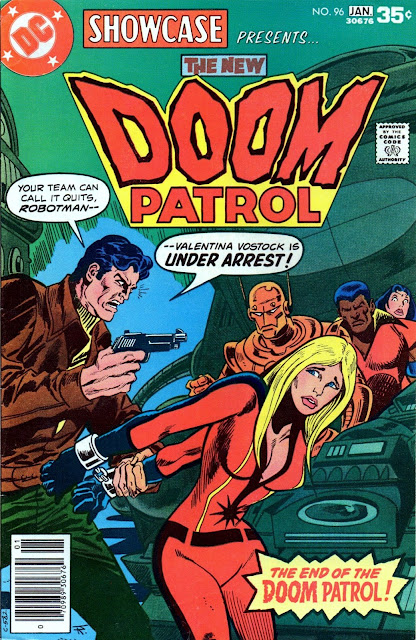 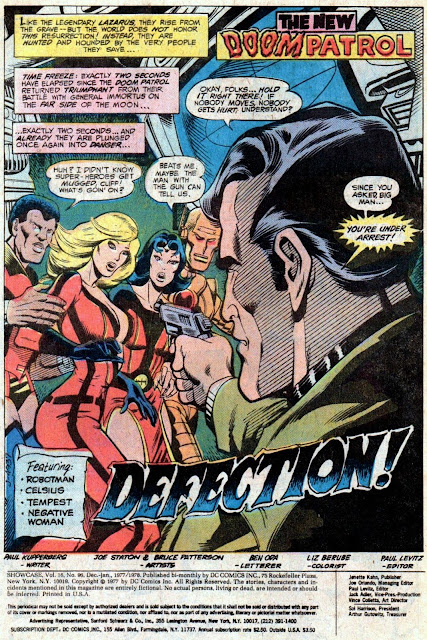 No. But you have to tell how Cliff Steele survived and who put him back together since I don't have the issue.

I'll have to read the issue again and remind myself, Phil. I'll get back to you on that.

Cliff's head, torso, and one arm remained in one piece after the explosion, and he dragged himself to the shore, where Dr. Magnus (creator of the Metal Men) found him and rebuilt him. IIRC, Robotman was the only member of the original Doom Patrol who survived and appeared in later versions of the team.

Thanks, TC. That saves me from having to dig out the issue again and re-reading it.

I really enjoyed Joe Statons work at DC (probably more than his stint at Marvel) - I remember having this comic and picking it up in a newsagents in Hamilton (as Hamilton always had a lot of DC titles) but that's about it I'm afraid - I do remember some really nice Jim Aparo covers on the Doom Patrol isuses. I don't think this title lasted to long (about a year) but there was a pretty good issue 100 featuring all the previous characters that appeared in Showcase from issue 1 onwards.

I got the second part of the trilogy and then the third in Baird's shop on Kirk Street in Strathaven in 1977. It was nearly another ten years before I got part one at a mart in Glasgow (probably).
I loved this team even though Tempest was a cliche angry black character with generic blast powers. Wasn't happy with the way the DP storylines developed in the 80s but surprisingly, Valentian (Negative Woman) Vostok turned up on tv's Legends of Tomorrow this week.

I replaced the first and third parts a good few years ago, Dougie, but I'm now waiting on the second part arriving after buying it on eBay a few days ago. Once I've got it, I'll sit down and re-read them all - for the first time since my original copies back in the '70s.