A fresh and frozen thin coating of snow adorns the streets outside my window as I type - ah, lovely. I sometimes wish it could be Winter forever, so clean and white does everything seem in all its frost-framed finery. Sorry, I'm being entirely self-indulgent, as the current state of the weather has absolutely nothing to do with this post.  (Unless I wanted to make a bad pun about it being a 'chiller' of a day.)

Contrary to what some Criv-ites might think, I don't, alas, possess every British MARVEL comic ever published.  I probably had most of them way back when, but that's no longer the case.  Take the Marvel Pocket Books from the early '80s - I bought a good many of them at the time (with the exception of YOUNG ROMANCE, which I don't recall ever seeing), but sometimes they just weren't in the shops.

This meant that I'd start collecting a particular title, but then have to give up on it because it just seemed to disappear from the shelves after several issues.  Case in point:  there were 28 issues of CHILLER PB, but I only possess the first eight of them.  And when it comes to the CONAN one, I only have the first two.  Did I once have more and give them away for some reason?  To tell the truth, I can now no longer recall with absolute certainty, but it's a possibility.

When it comes to STAR HEROES (not shown), I didn't buy it 'til it started reprinting the early X-MEN tales in its tenth issue, changing its name to reflect the new direction shortly after.  Likewise, I may have purchased the first SPIDER-MAN PBs (or may not), but the only ones I have now are a few with LEE/DITKO tales. I'd almost certainly have bought the first issue, but if I continued with it, I suspect that I later gave away any which didn't contain reprints of the earliest stories.

But what's all that to you?  Do you care?  Of course not!  All you want is to see the pretty piccies - and who can blame you?  So here's a hodge-podge of covers from an assortment of whatever Pocket Books I don't have complete sets of.  There's bound to be something you'll like. I'll get around to showing you the FANTASTIC FOUR and the X-MEN ones reasonably soon.  Promise. 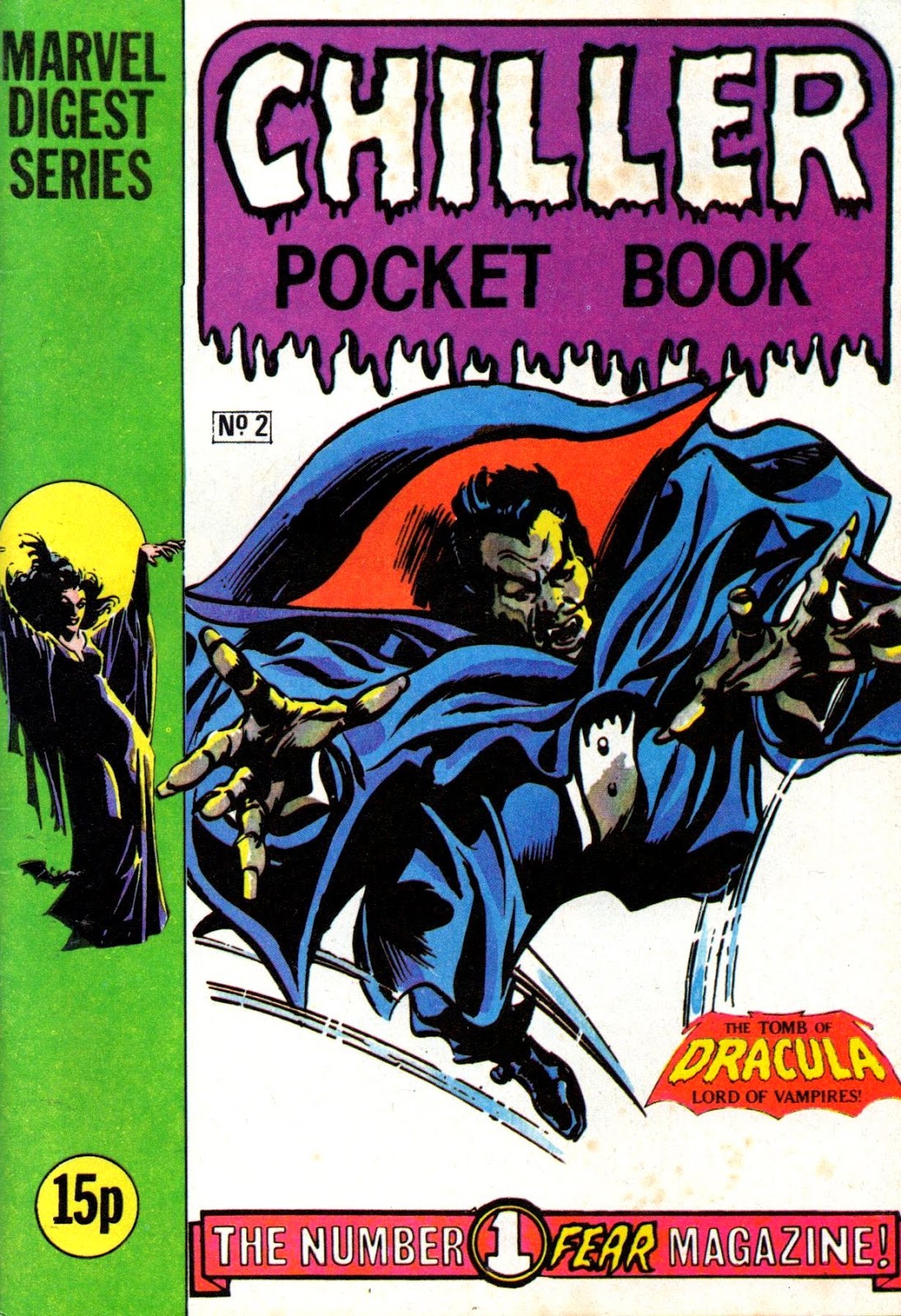 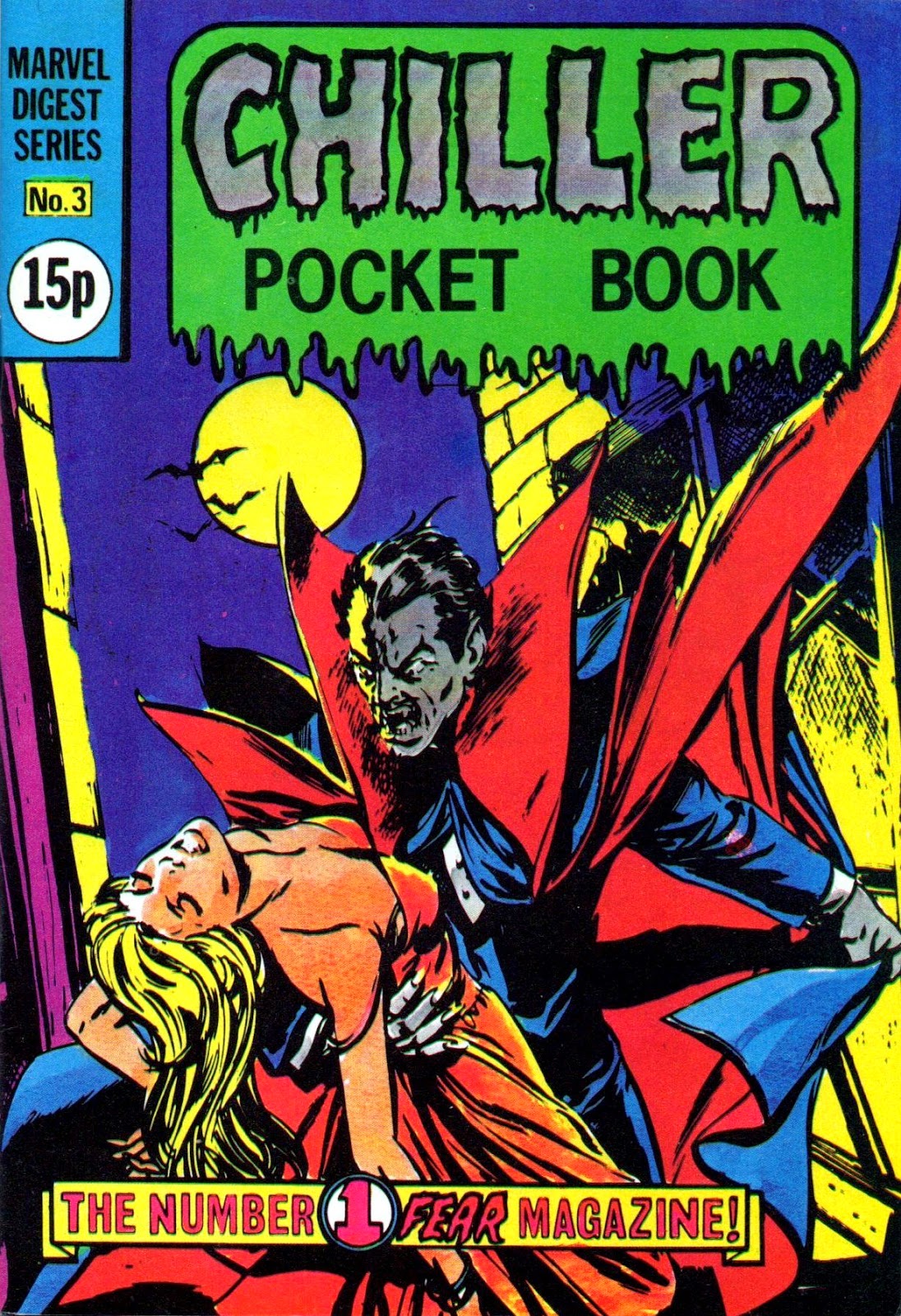 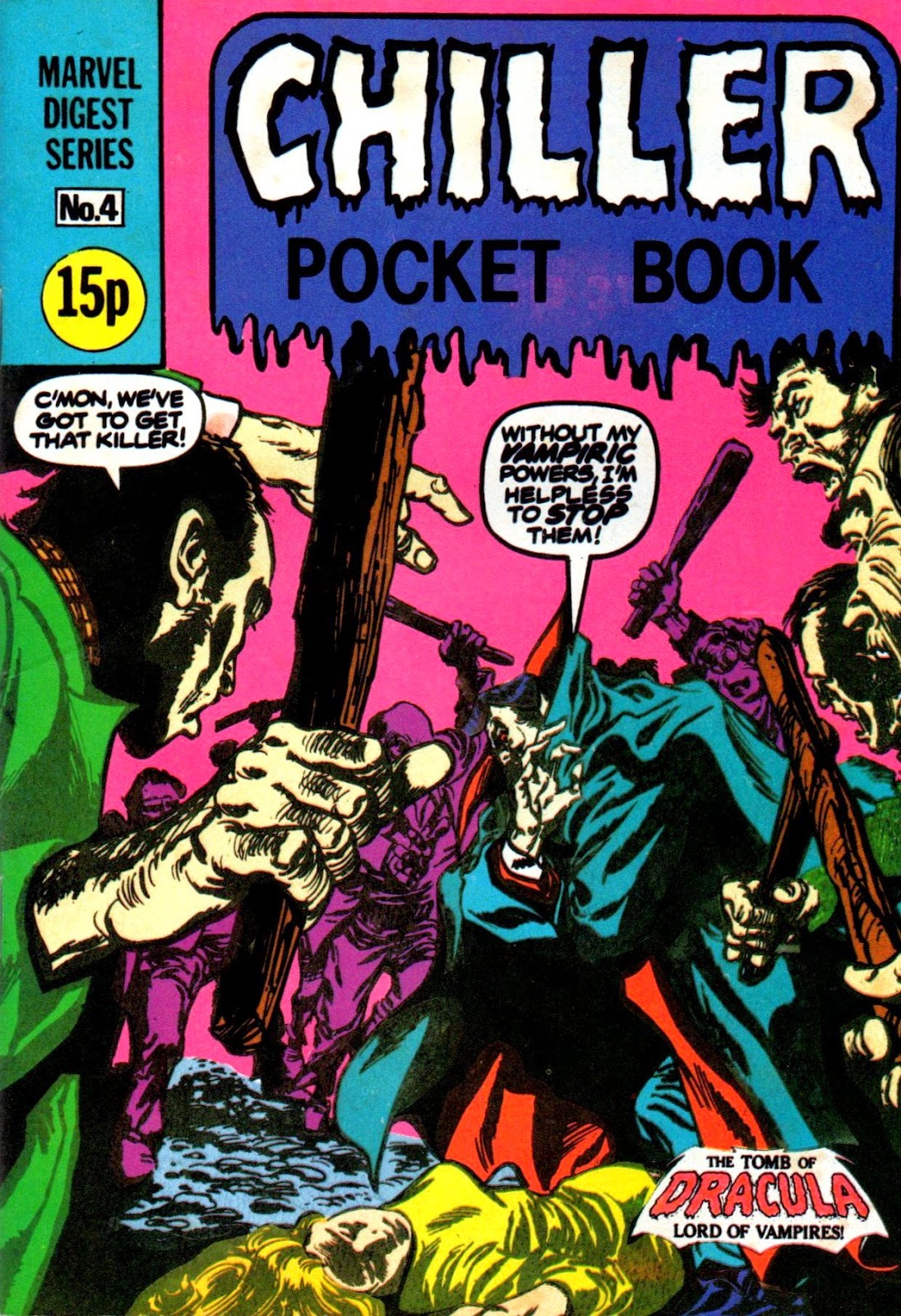 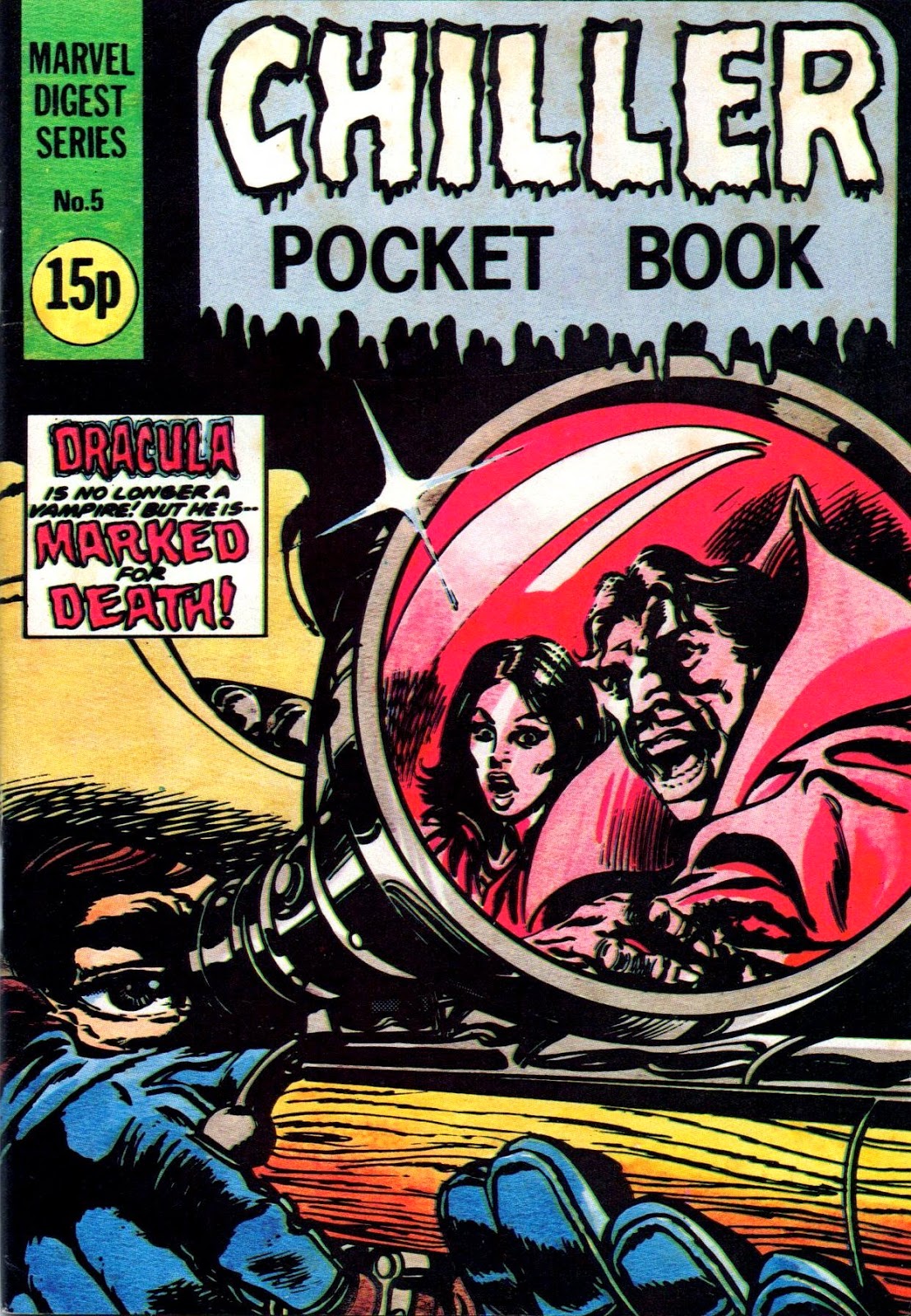 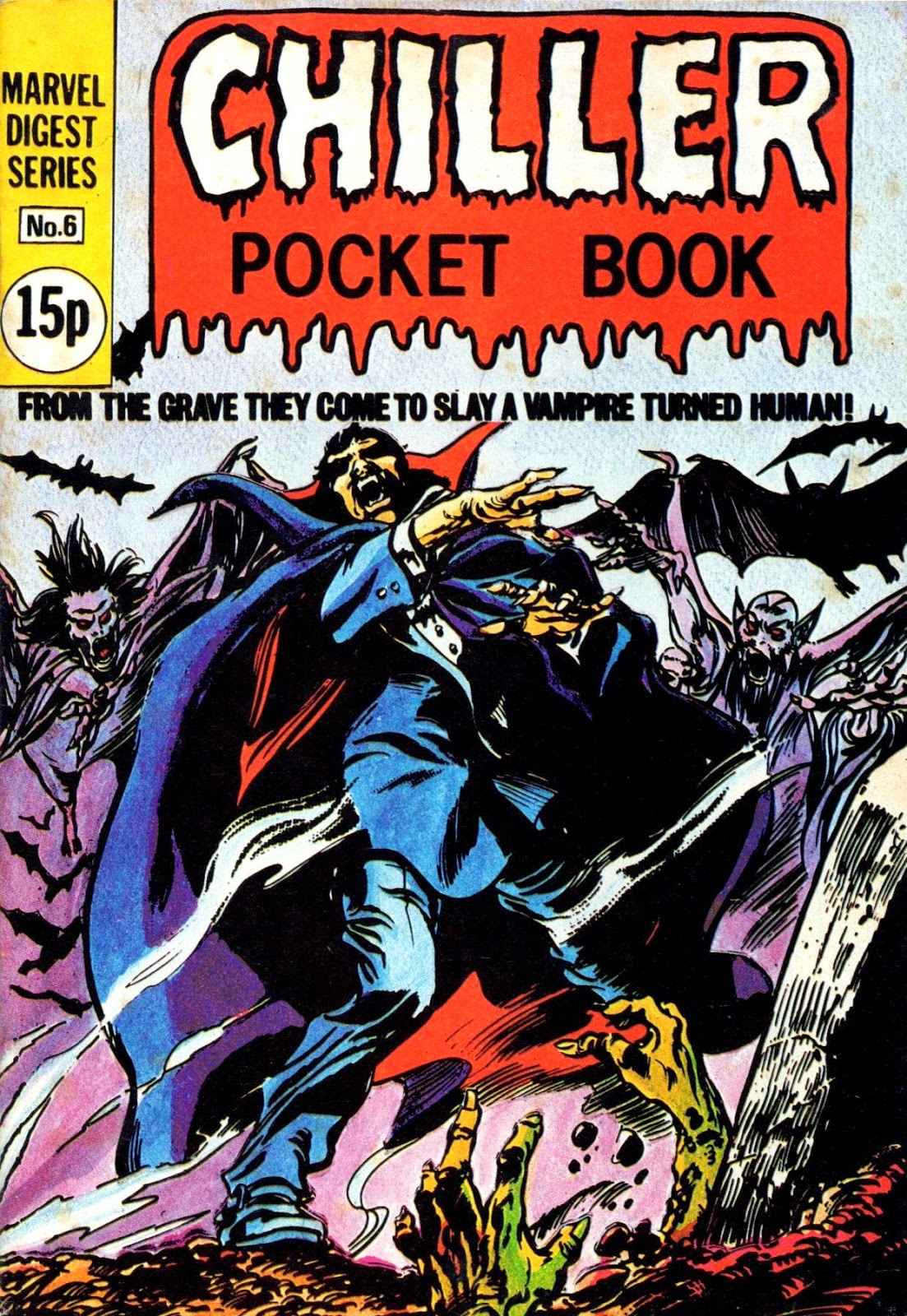 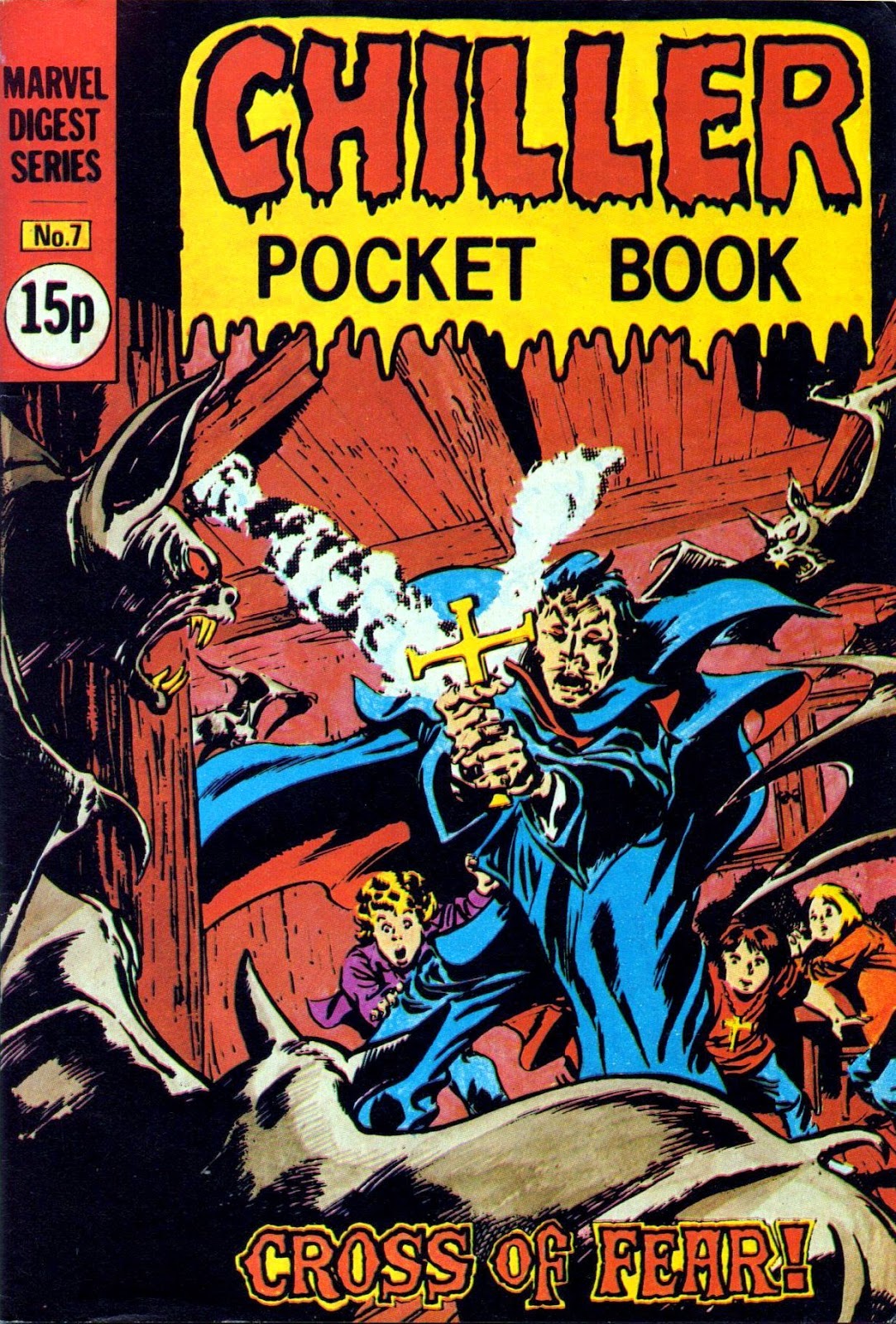 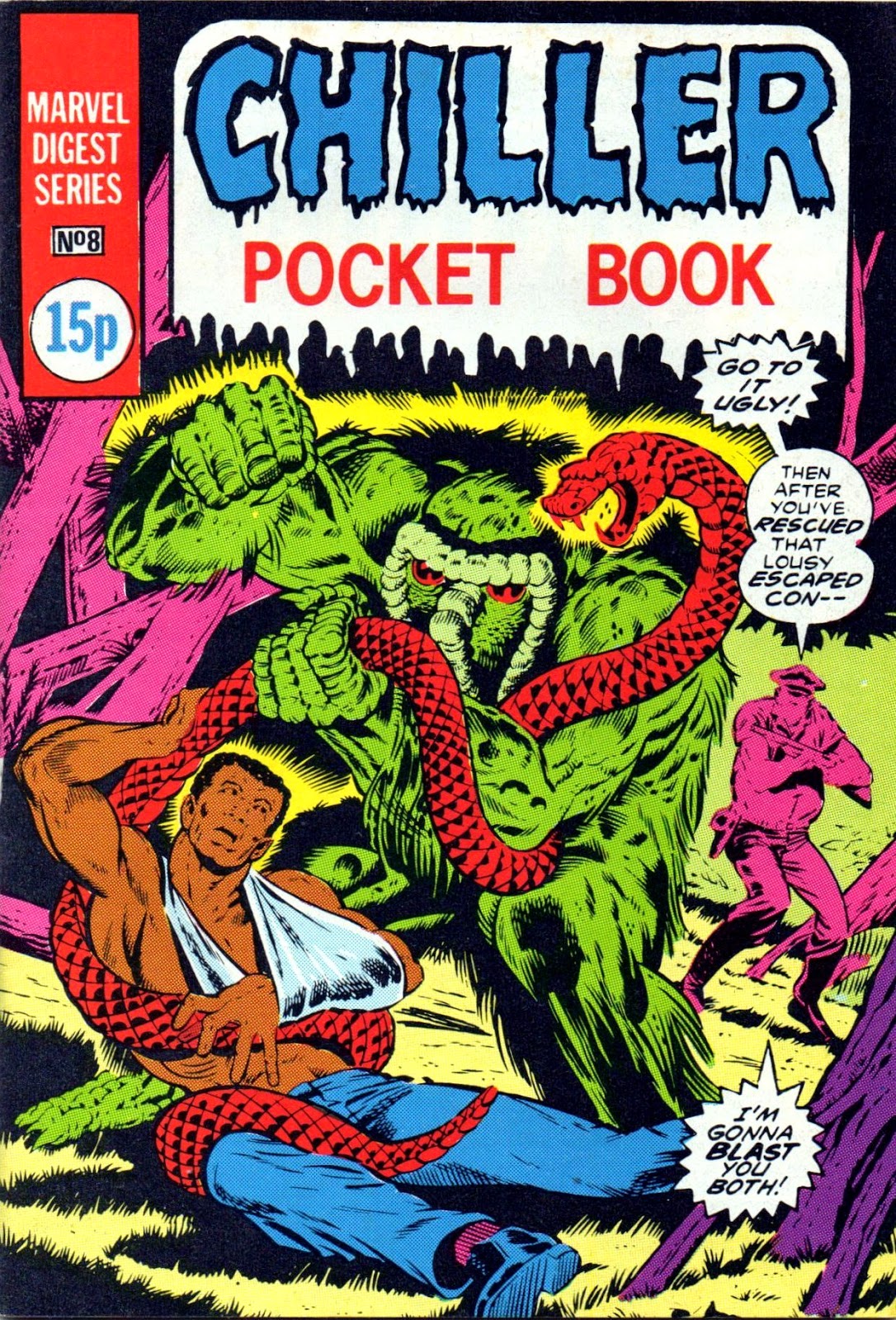 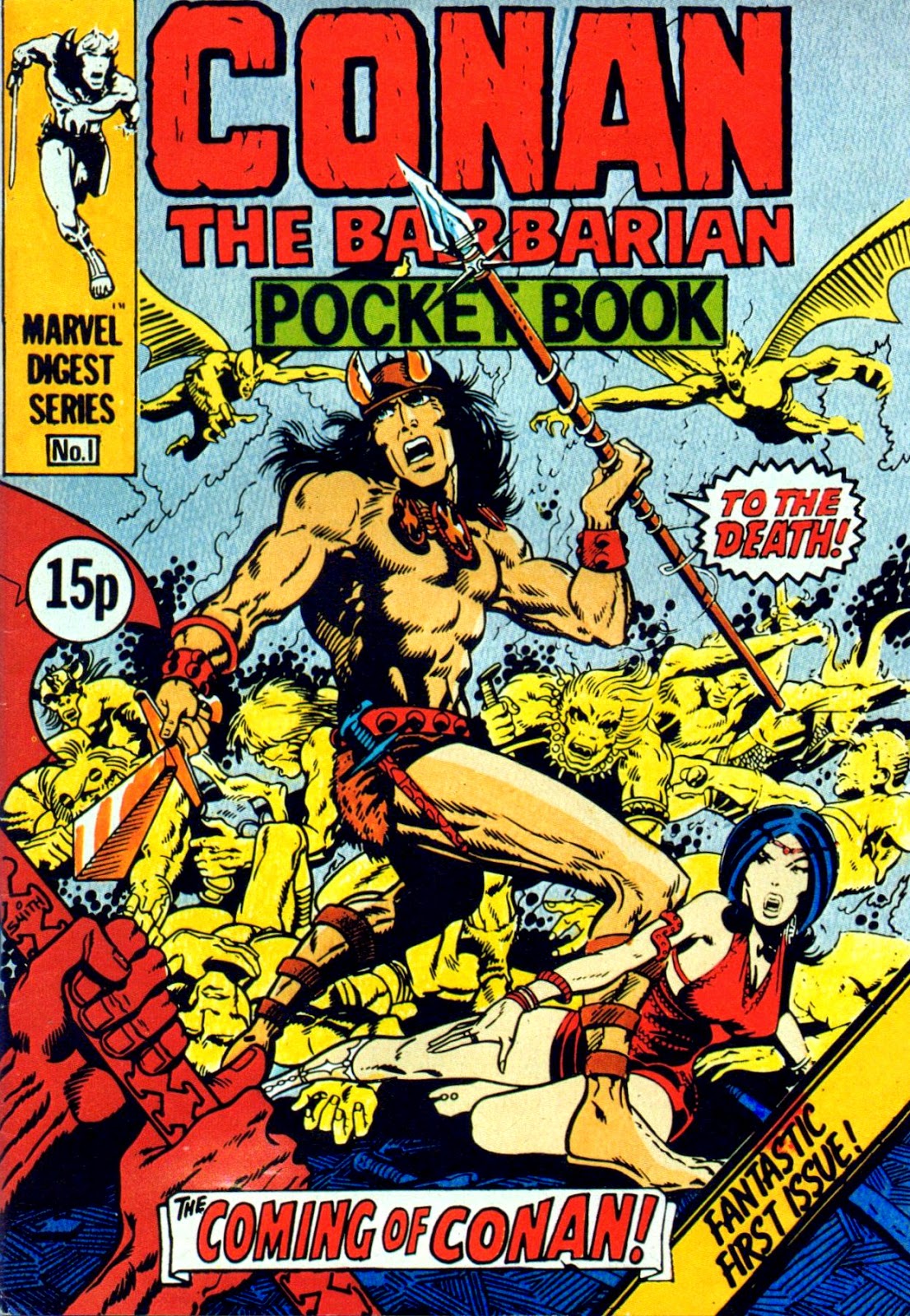 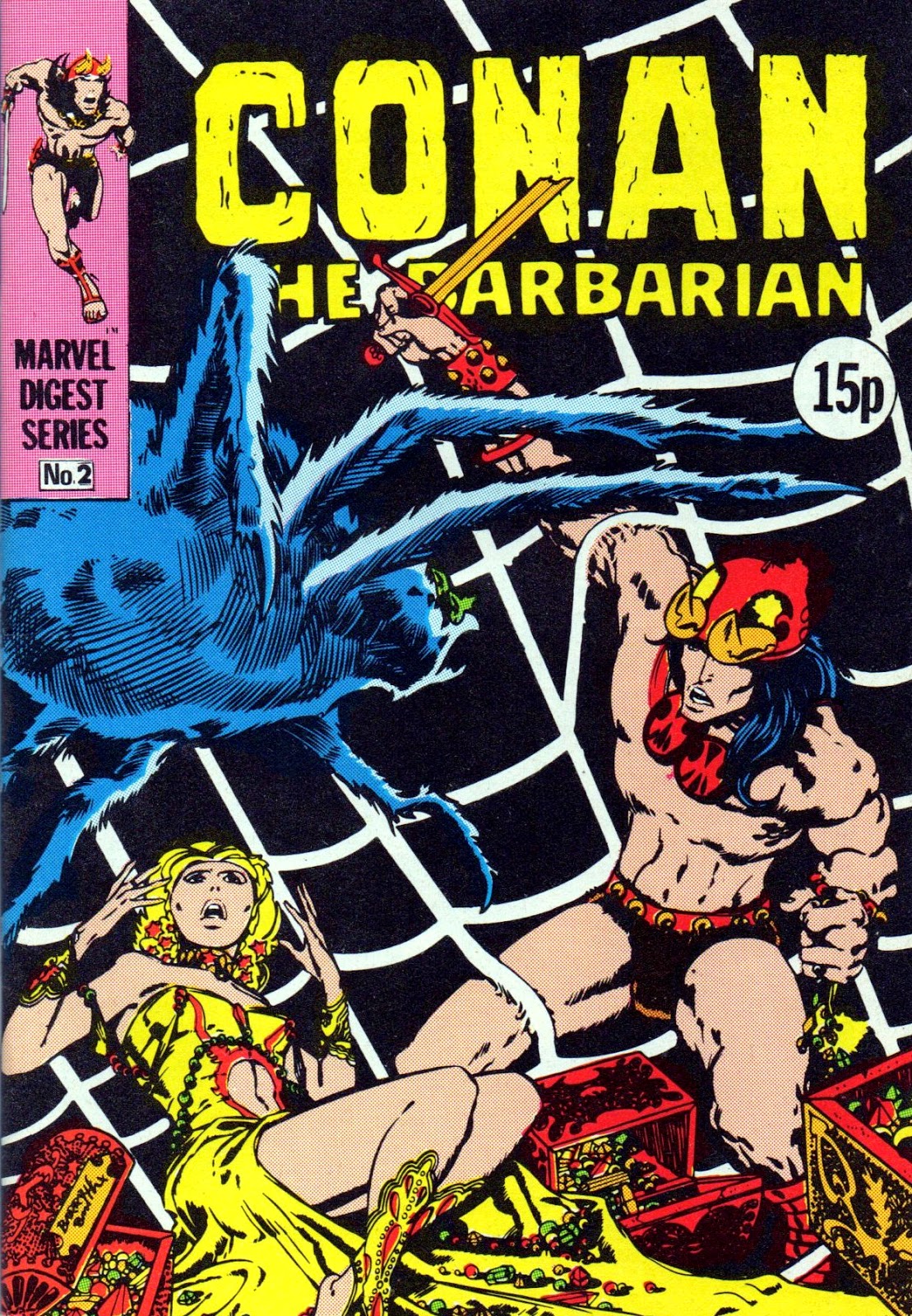 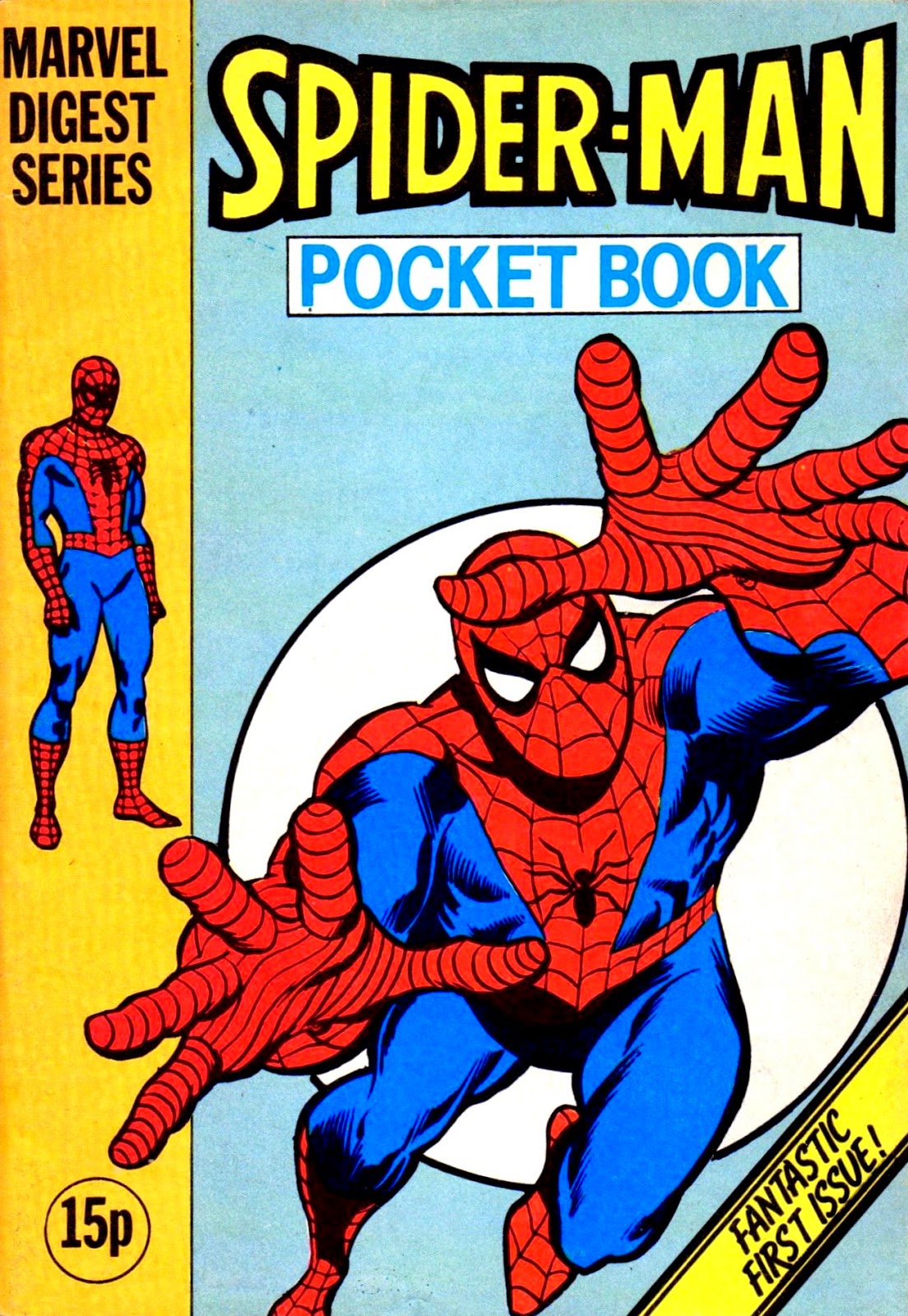 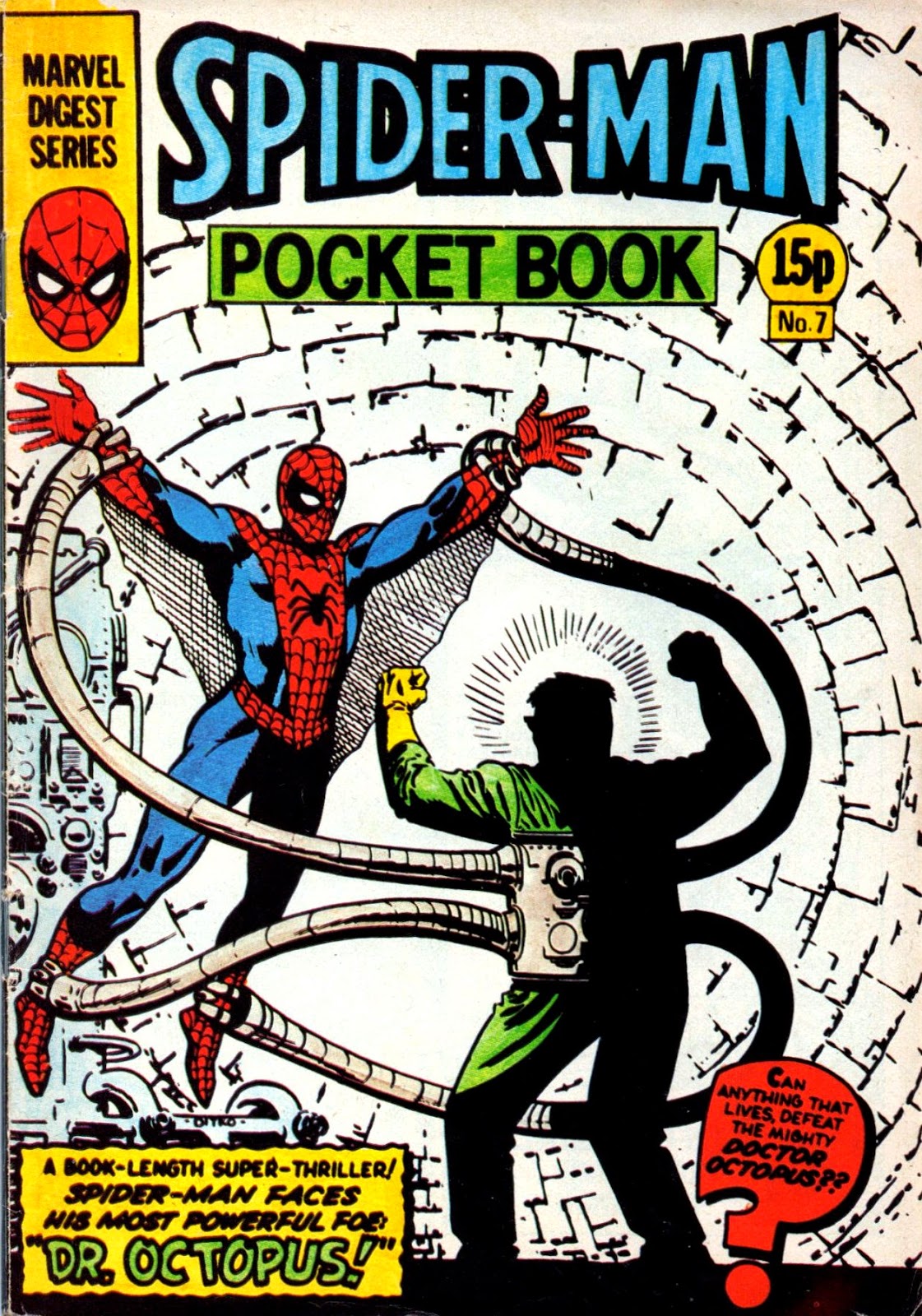 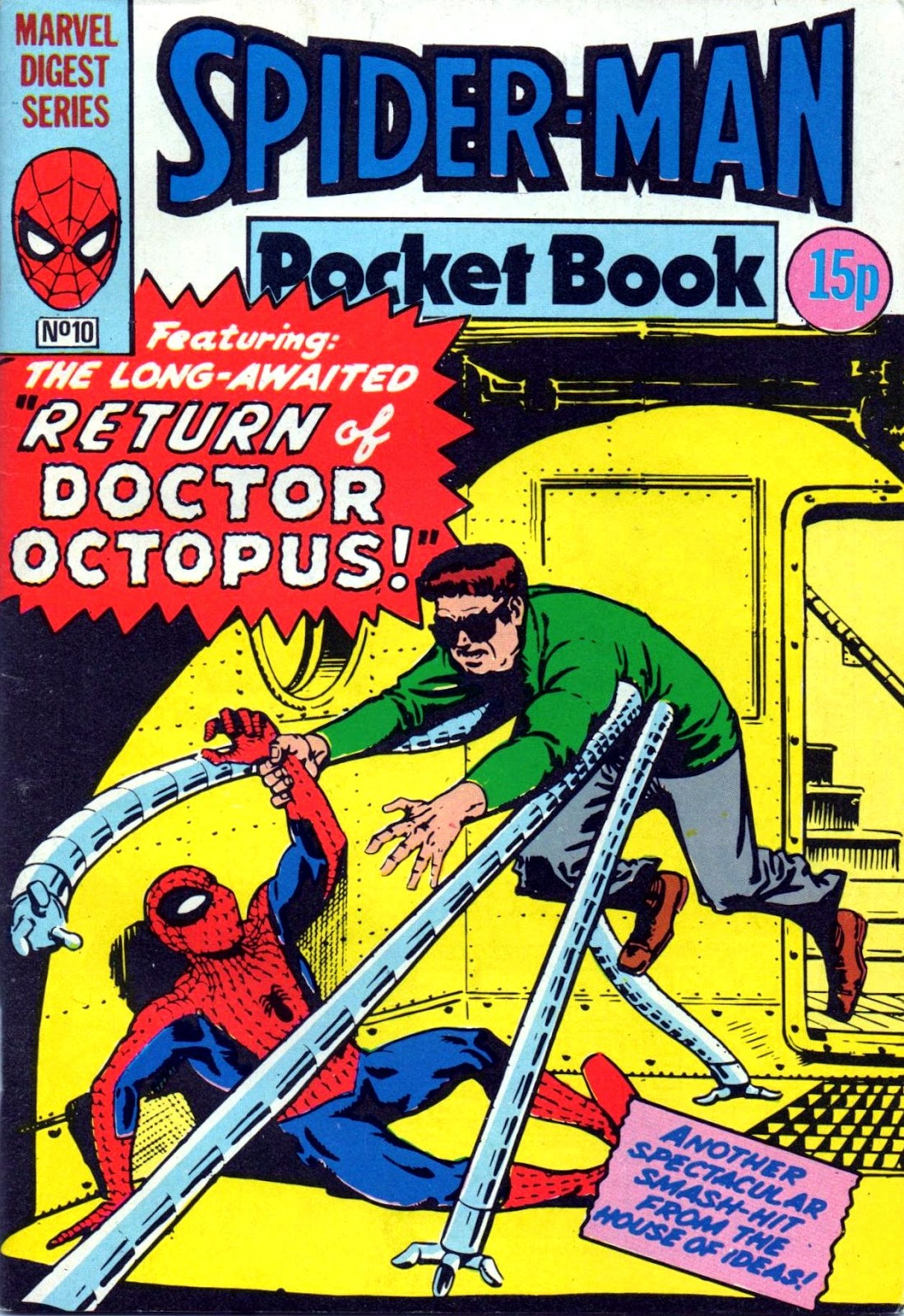 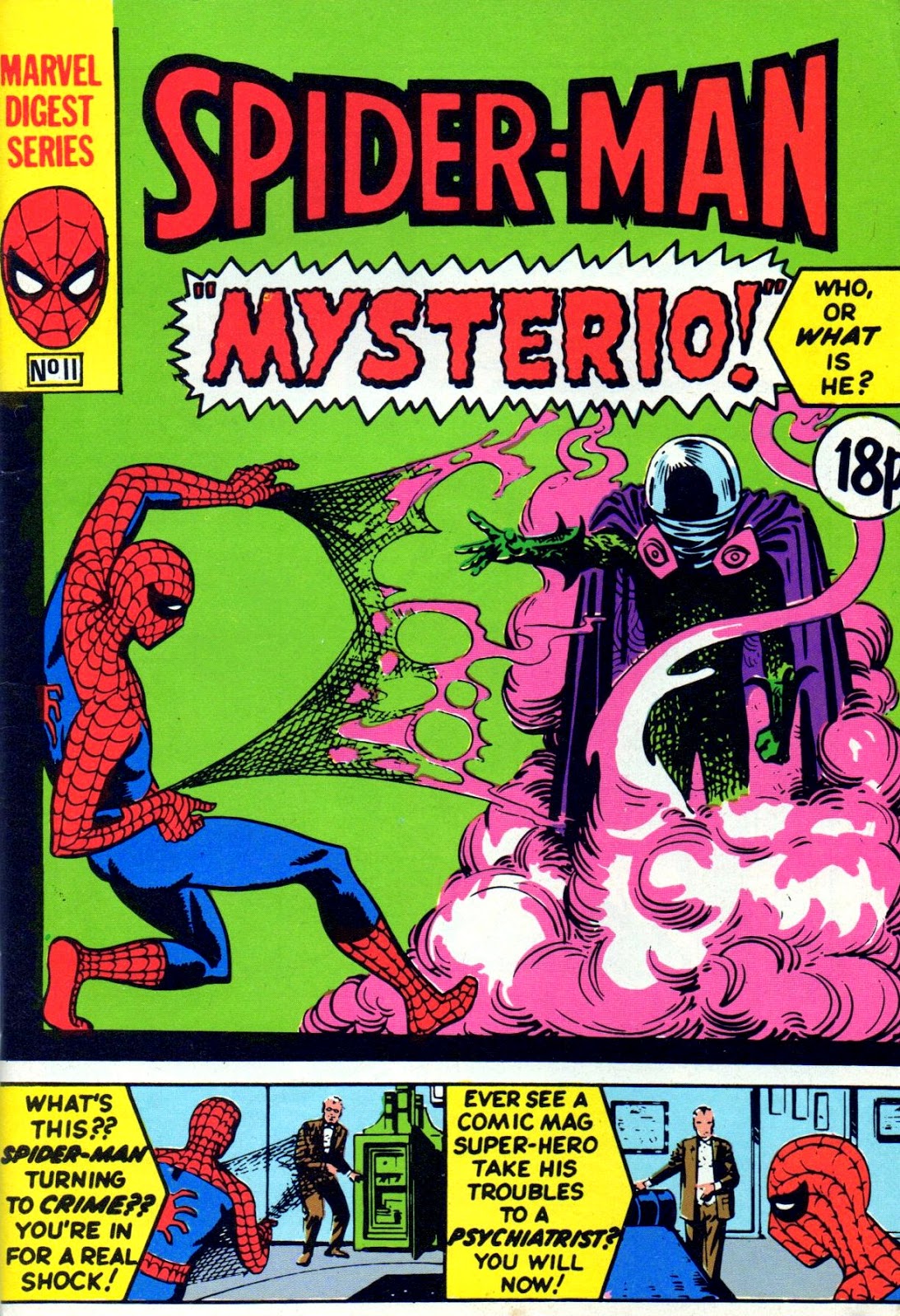 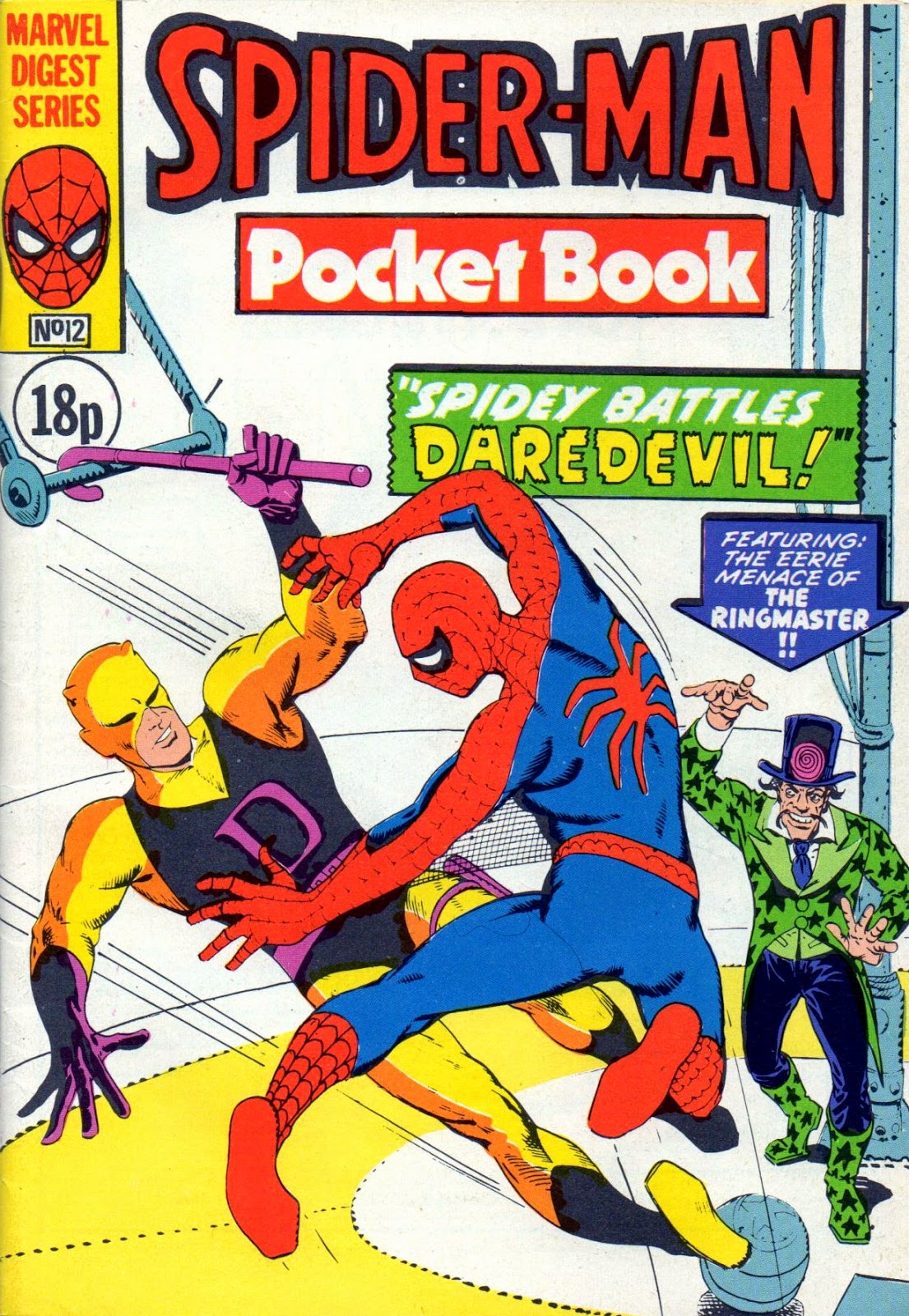 I definitely had Chiller No.1 and a few others of Chiller. I also had Conan No.1 and I thought I'd had a couple more Conans but perhaps it was just the first one. When the Conan weekly came out I only bought No.2 ("The Lair Of The Beast-Men") and I bought the Conan PB mainly for that story which is one of my favourites even though it's basically a rip-off of Planet of The Apes. By this time my attention was more and more on buying the imported U.S. Marvel comics so I'd often miss the Marvel UK output and by about late 1981 I'd abandoned Marvel UK completely.

Luckily, I could afford to buy U.S. & U.K. Marvels, along with DC titles too. Still got quite a lot of the ones I bought at the time.

I also stopped buying Marvel UK titles on a regular bases y 1980 (the exception being MWOM) however I did buy the pocket books when I could see them (but as previously stated they were never in the shops on a regular basis) Chiller was one I got on a semi regular basis and it was really good - I recall seeing the Spider-man PB but was buying Marvel Tales with the excellent Ditko/Lee tales in them at that time - I wasn't even aware of the Conan at the time and have to this date never seen an issue of this. I think PBs are a great idea they can stay on the shelves for months I think they should have made them more like the Commando books though as the Marvel PBs were a bit bigger (if I recall correctly)

Well, you've seen two Conan PBs on this post now, McScotty, so you've lost that particular cherry. I think the Marvel Tales reprints of Spidey came out about a year later, and I was buying them as well - still got 'em, in fact. The pocket books weren't too different from the Commando books - any slight difference in size would've been dictated by the demands of the page dimensions of the strips. They'd have had to crop them to fit Commando size, or have too much margin, which means they'd have been harder to read.

Was there ever a more perfect team-up than Gene Colan and Dracula?

I disliked 'genial 'Gene on Captain Marvel but when it came to the count....wow!

Oh,I have never seen these chillers before.

The thrill of hunting them down on eBay now awaits you, Baab. Have fun.

Unlike McScotty, 1980 was the year that I really started buying Marvel UK again in earnest. I had gotten the bug again the previous year with DW, then started adding the other weeklies and monthlies again and it wasn't long before I was buying every Marvel UK title I saw. Strangely enough I never saw a Young Romance pb in this area either.
This practice of buying every title went on well through the 80's, until I lost interest when all they were producing were licensed and children's titles. Of course, if I did come across an odd super-hero title I would snatch it up, but that didn't happen very often.

It was mainly the superhero titles I bought, JP, but I also got some of the licenced stuff. Like Rupert, Hanna-Barbera and the like. Usually just the first few issues 'though.

I never saw Young Romance either (not that I'd have bought it anyway !!) - I remember when the first Pocket Books came out I really liked the look of them with that strip down the left-hand side. But that didn't last long and looking at the later covers I can see that the strip would have taken up precious room. The cover of FF PB No.1 looked really good though with the four heads of the FF running down the left-hand side - it was a much better cover than Complete FF in 1977.

Agreed about the Complete FF cover - it was a little lacklustre to say the least, CJ.