Isn't it odd the way some things lodge in the mind?  Until today, I hadn't seen this PERSUADERS Holiday Special in 42 years, yet some of the contents are as clear in my memory as though I'd purchased it only yesterday.  I remember buying it from my local newsagent's on an early Summer evening in 1972 and walking up the stairs that led from my neighbourhood shops, while thumbing through the pages in wide-eyed wonder as I made my way back to my house across the road.

The artwork on The PHANTOM COACH (by MIGUEL QUESADA, though I didn't know his name until many years later) mightily impressed me and it's great to see it again after all this time.  I think this was the first time I'd seen an example of his art (that I can recall anyway), though I'm sure I saw it again in other, later publications.  I even remember the photo-joke page, especially the first picture, which I must've quoted numerous times over the years, although, until seeing it again today, I think I'd almost forgotten exactly where I'd nicked it from.

As this was a Holiday Special, I'd imagine it went on sale sometime around May or June, and as I moved to another house in another neighbourhood halfway through June of 1972, I must've bought this magazine not too long before flitting.  Strangely, though, I don't associate it with that particular period, and had it not been dated, I'd have thought I acquired it the year before.  Alas, even my memory is not perfect, and sometimes seeks to re-arrange the events of my own personal history.

Speaking of which, what memories do you associate with this POLYSTYLE PUBLICATIONS periodical?  Does it conjure up keenly-remembered recollections of yesteryear, or is it a vague, half-forgotten shade from your childhood that lies just beyond your mind's grasp?  Either way, tell your fellow Criv-ites all about it in our 'ever- eager-to-hear-from-you' comments section.

Look at the first speech balloon in the first panel of page two - 'Cemetery' is misspelt 'Cemetary'.  What's more, if you examine it carefully, you'll see that the 'A' is slightly dipped, indicating that it was a 'correction'.  It must've been spelt right to begin with. 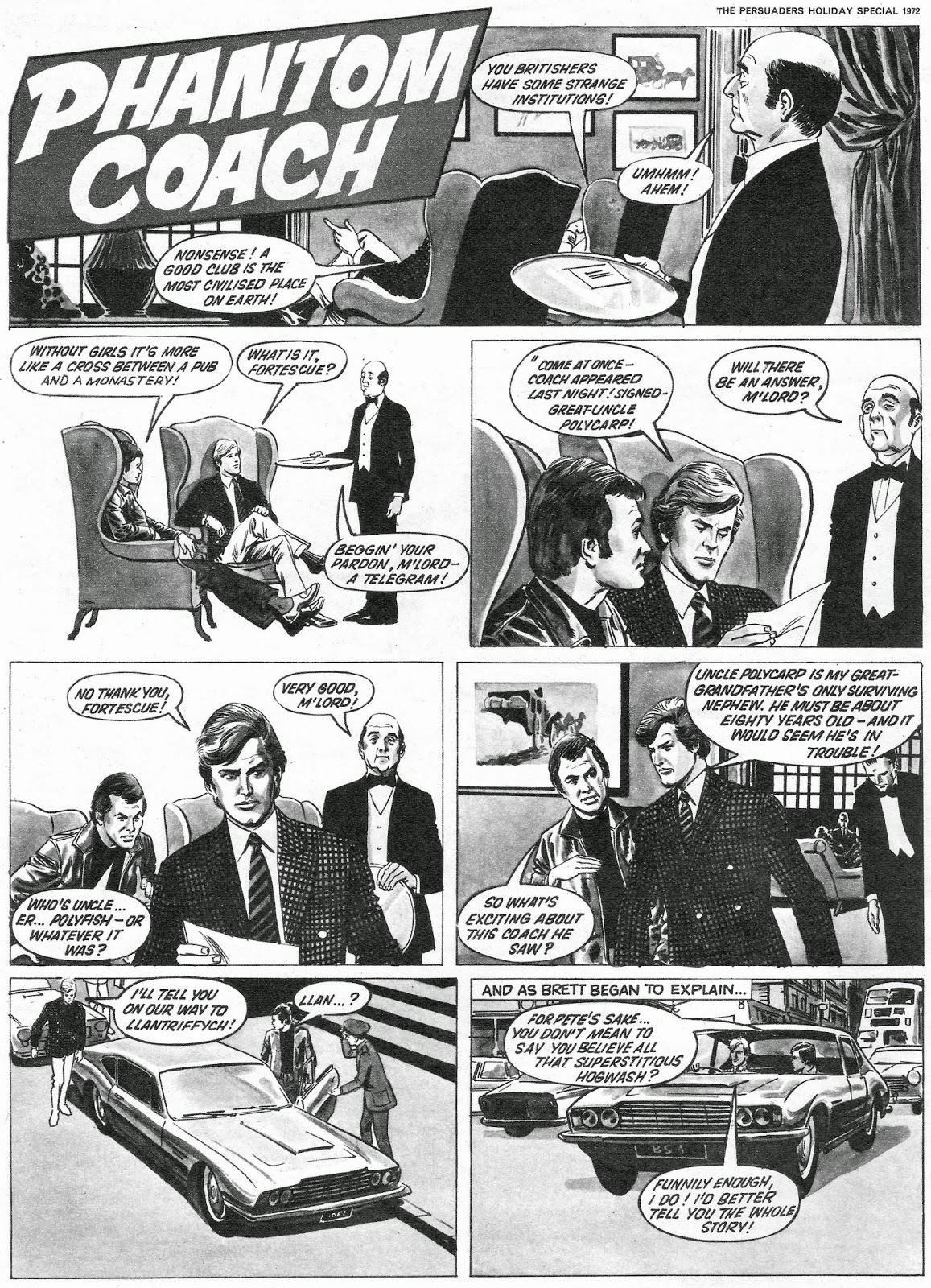 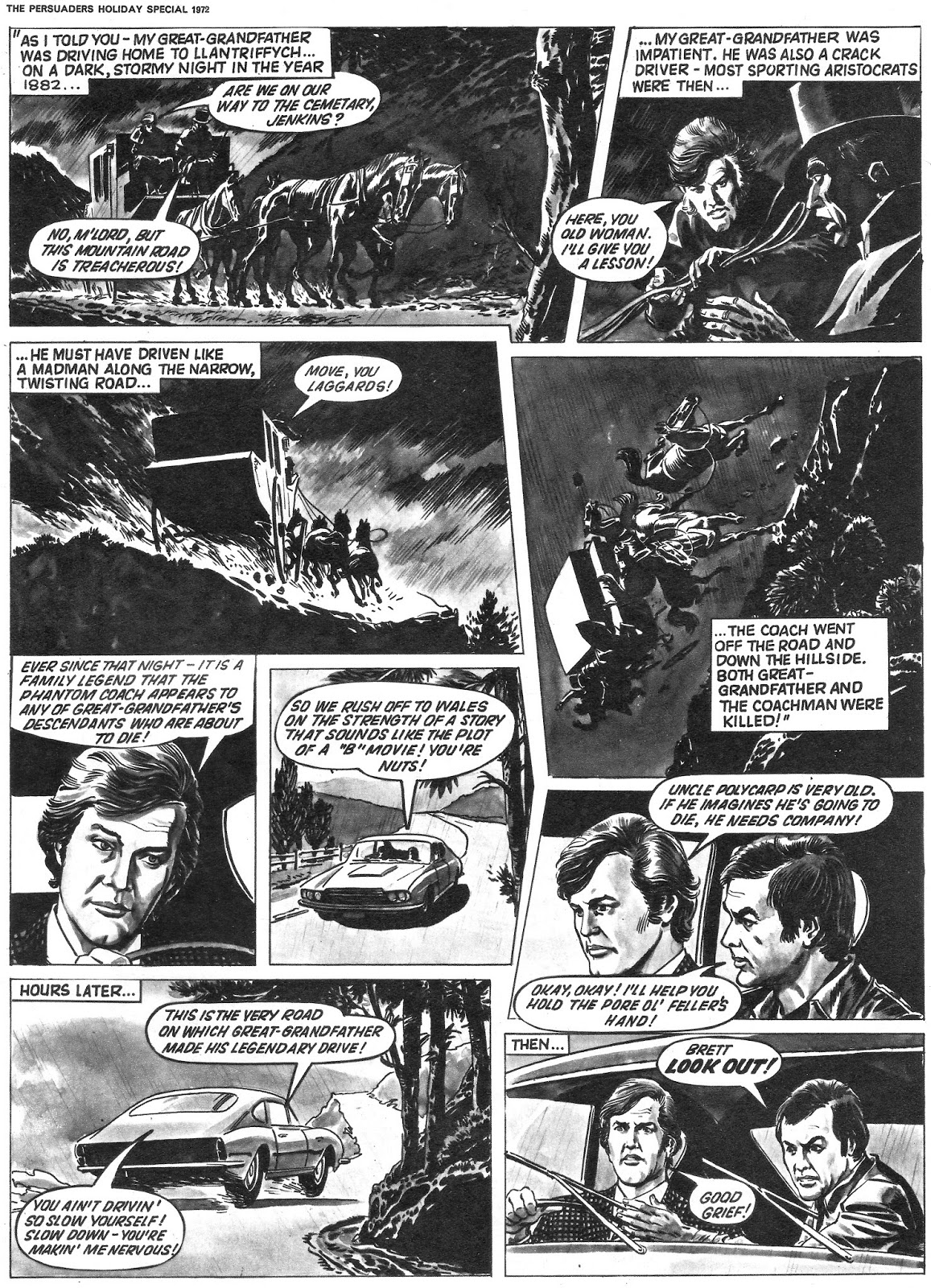 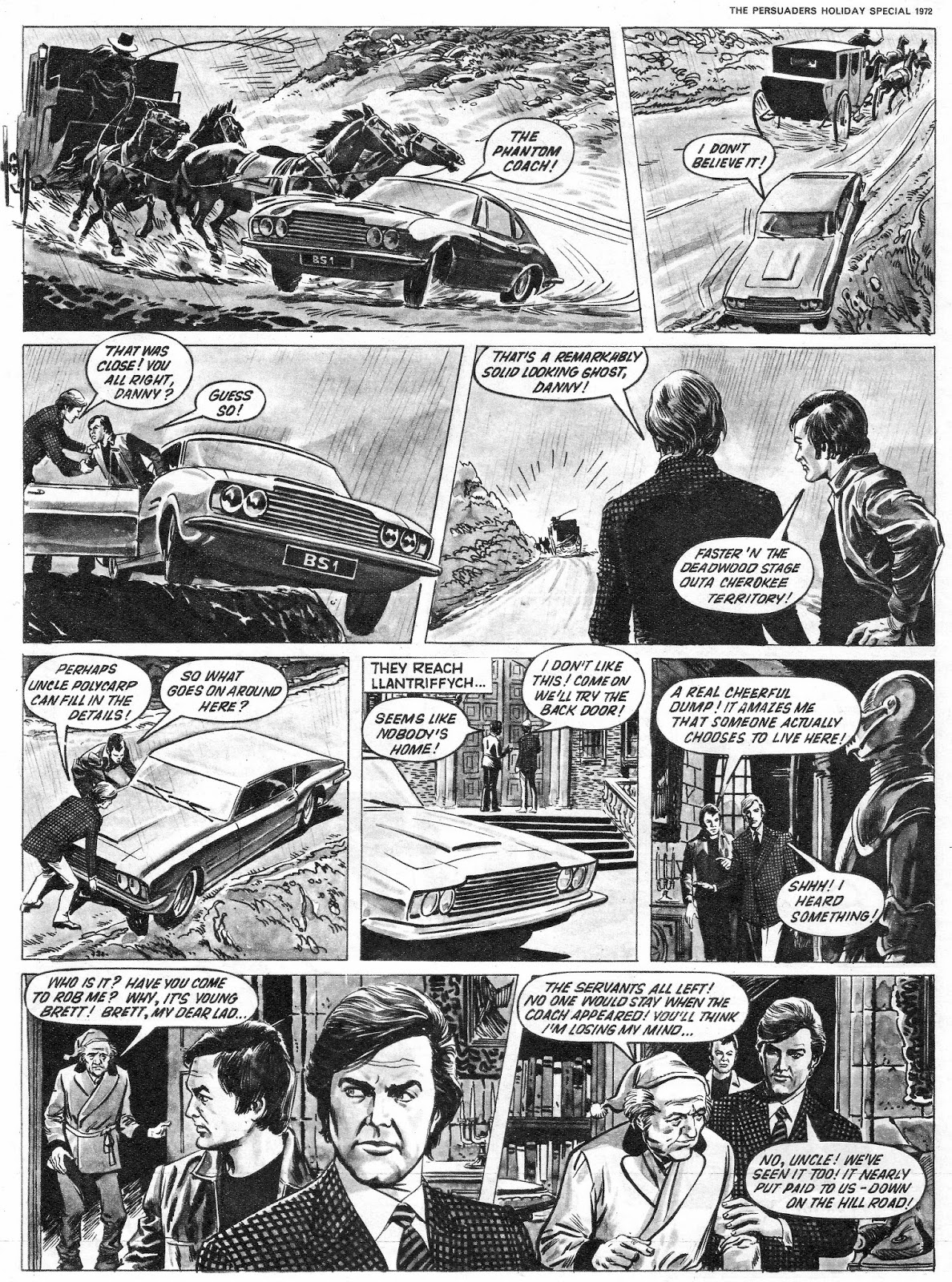 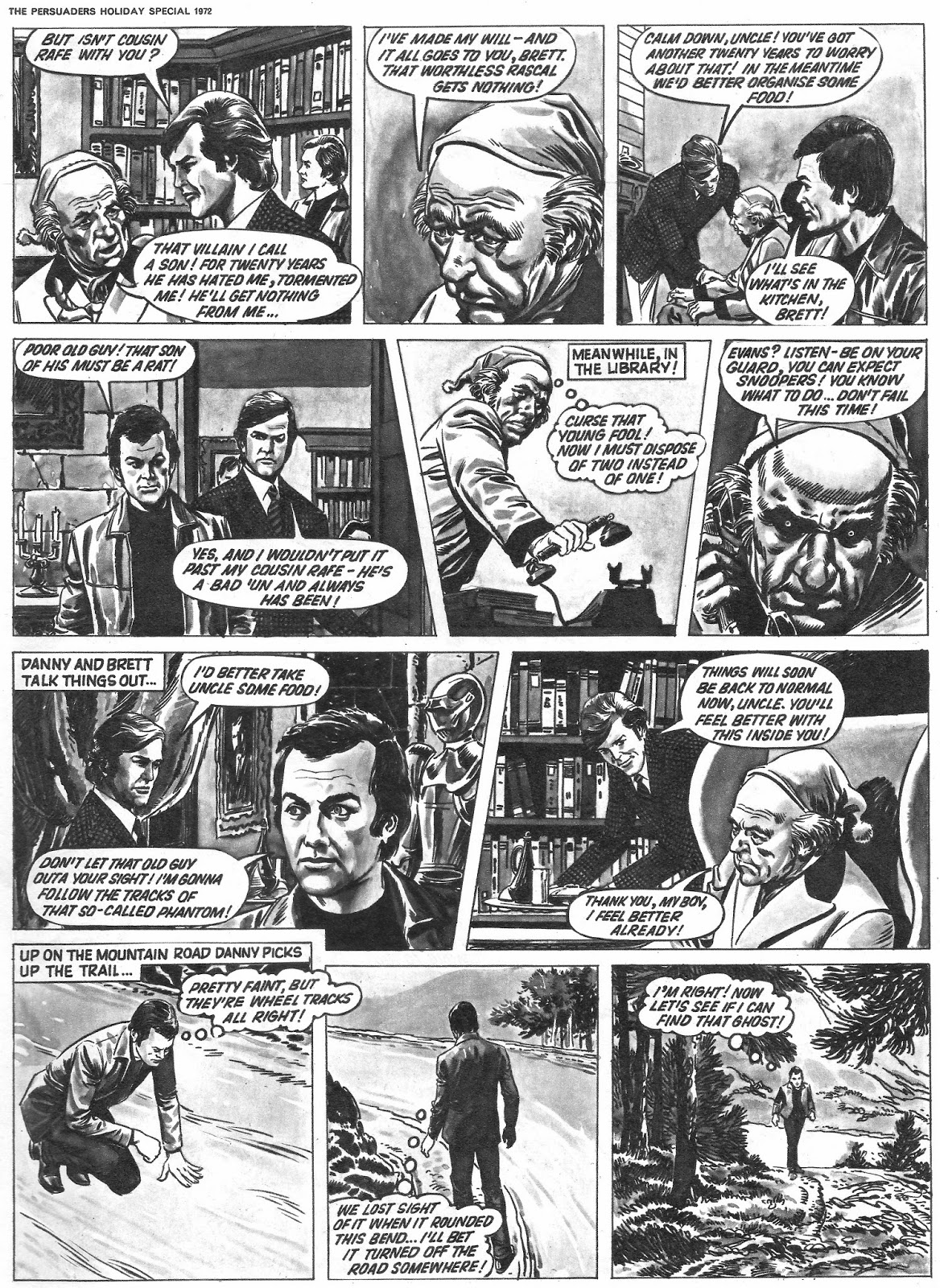 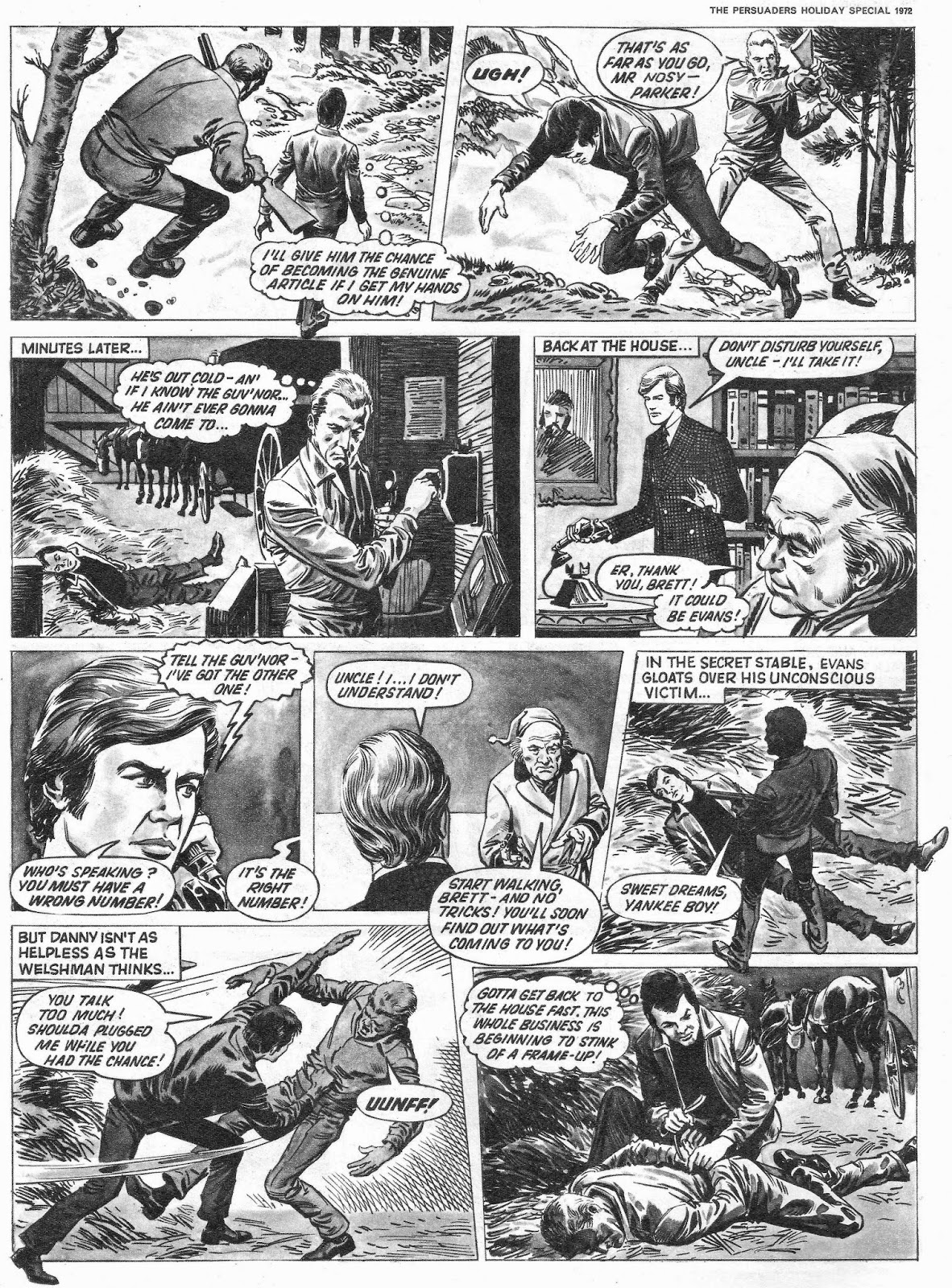 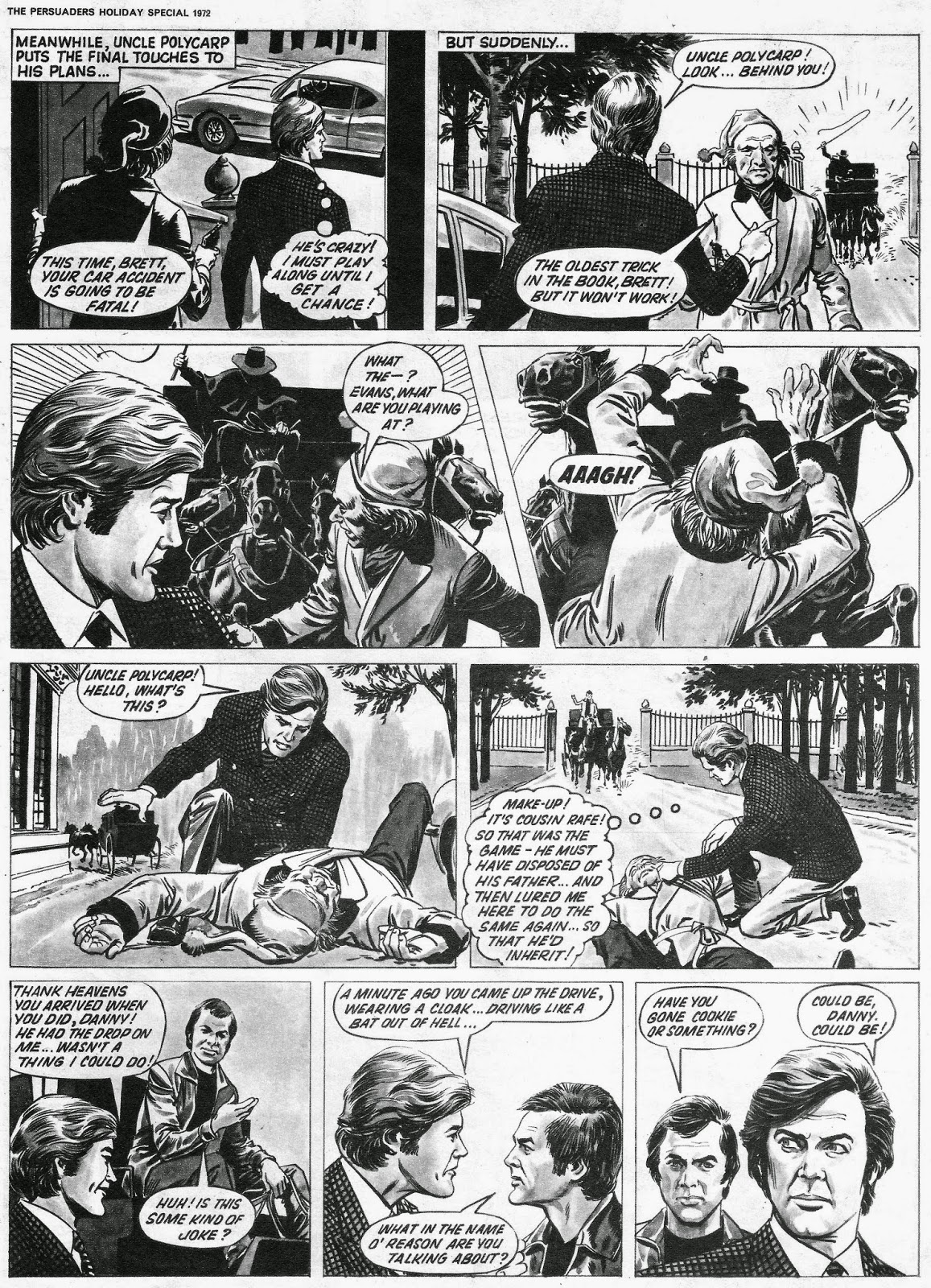 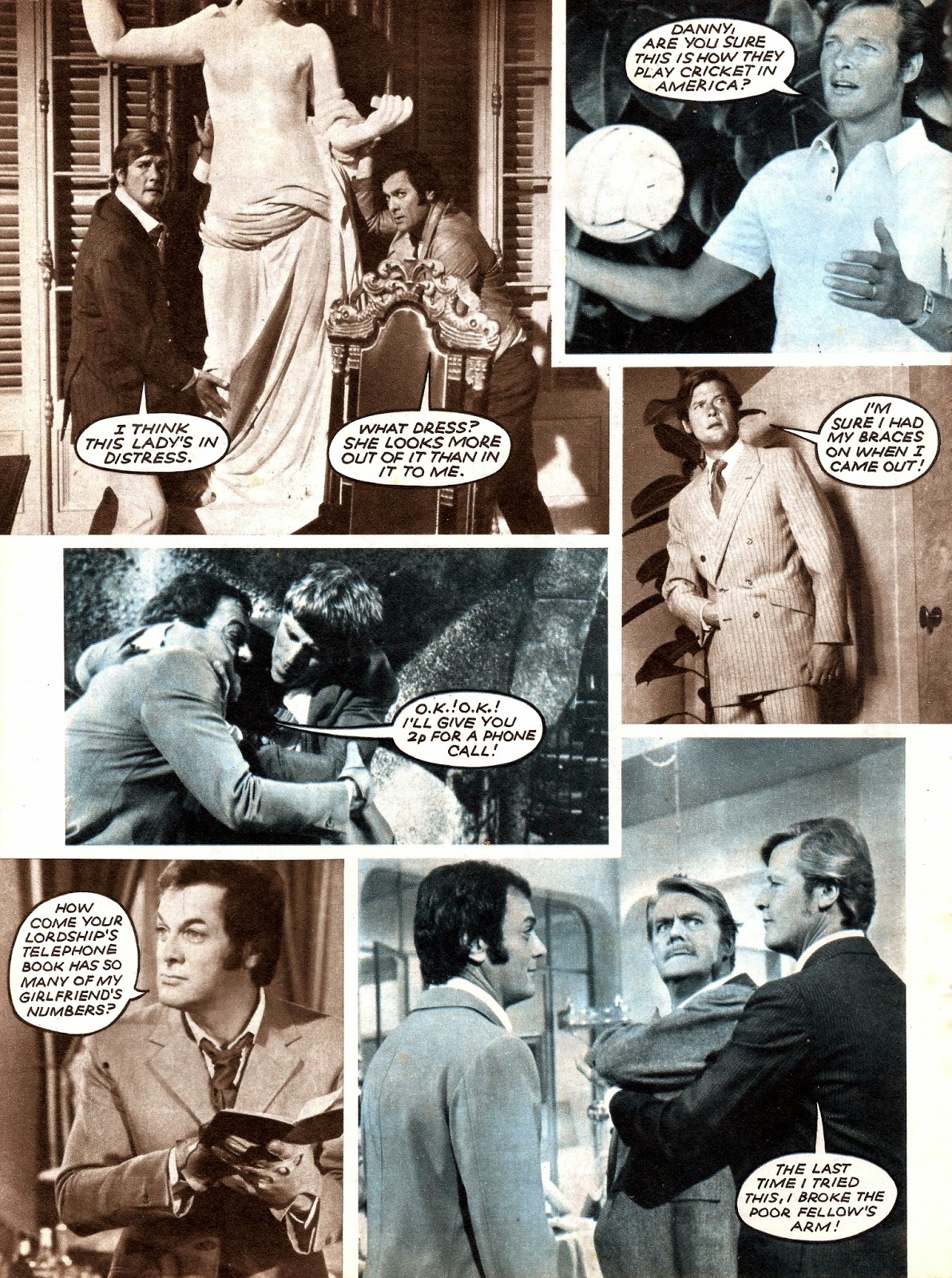 I was only six in 1972 so too young to remember this but years later I used to get The Persuaders muddled up with The Protectors which had that great theme tune by Tony Christie "Avenues and Alleyways". I heard Roger Moore on the radio a few years ago and he said Tony Curtis was rather snooty about acting in a TV programme until he saw how popular The Saint was and how famous it had made Moore - Curtis changed his mind after that and so he agreed to be in The Persuaders. I think I prefer The Protectors though, which starred Robert Vaughn and Nyree Dawn Porter (as I remember).

I guess his artwork made you want to see Moore!
( See what I did there? )

Tony Curtis was actually getting very little work in America at this time, which is probably another reason why he accepted the role of Danny Wilde, CJ. Interestingly, Robert Vaughn hated The Protectors, and Gerry Anderson, and barely mentions them in his autobiography. Both shows had great theme tunes.

The Persuaders theme is one of my favourites.
I was not a Roger Moore fan but did like him teamed up with Tony Curtis.

The Protectors had a good theme tune too but I did not like the 'vibe' of the shoe.
I did not know Gerry Anderson had a hand in it.

These two are fine examples of the theme tunes being better than the show.

Interestingly, Baab, The Persuaders was inspired by The Saint episode where a Texan millionaire, played by Stuart Damon, teamed up with Simon Templar.

Once heard a radio quiz show hosted by Paul Jones and after playing Avenues and Alleyways he recalled several years after being a guest star on The Protectors he saw Robert Vaughan eating breakfast in a restaurant. Being polite but absent minded Jones walked up and said 'You may not remember me, but I worked with you once on an episode of THE PERSUADERS! ' Vaughan apparently didn't even look up when he said, 'Not unless my name is Roger Moore! '

Now that is interesting,a champion and a saint inspiring the persuaders.

Seems a bit of a miserable git, sadly. Then again, David McCallum is still doing well, and Robert Vaughn is doing small roles in Coronation Street. No wonder he's not ecstatic.