A HINT OF A GLINT THROUGH THE WINDOW... 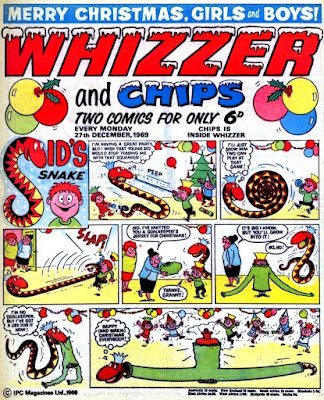 I love this time of year.  Autumn has its own scents and hues, and, as
it starts to give way to Winter, assumes a magical, hybrid quality of the
two seasons peculiar unto itself.  When any last faint remnants of lingering
Summer have finally disappeared and been replaced with the preliminary
signs of Jack Frost's rapidly oncoming kingdom, I can't help but think
back to what an enchanted time it seemed to be when I was a kid. 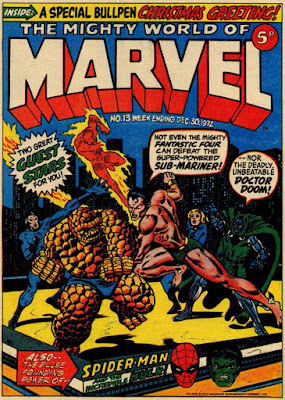 Arising on dark mornings, streetlights a-twinkle;  the first spidery
glints of frost on the windows and pavements outside;  warm milk on
cornflakes to fortify me for my trek to school;  sitting before the elec-
tric fire, hypnotized by shadows of dancing, flickering simulated flames;
the fresh, biting chill of the air - all those memories - or any combination
of them - embody that particular period of my personal history.  Even
today, the alluring nature of the season is as much to do with the
warm glow of memory as enjoying it for its own sake. 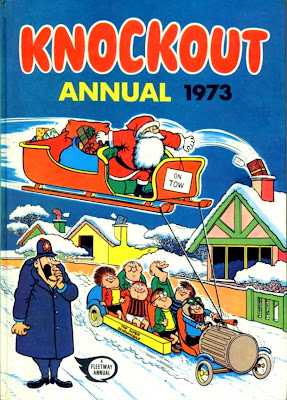 The walk to school, the chatter of friends, the sheer exuberance
of childhood - how it all comes rushing back to me in torrents.  A large
part of those memories is shaped by whatever comics I was buying at the
time:  TV CENTURY 21, WHAM!, SMASH!, FANTASTIC, WHIZZER
& CHIPS, MIGHTY WORLD OF MARVEL, SPIDER-MAN COMICS
WEEKLY and many more - all those publications seem to blend into one big
memory (regardless of whether they were actually available or I was buying
them concurrently or not), and span a goodly number of years from primary
to secondary school.  (I often smuggled a newly purchased comic into
the classroom in my schoolbag and then had to suffer an agony of
waiting 'til I could peruse it during the interval.) 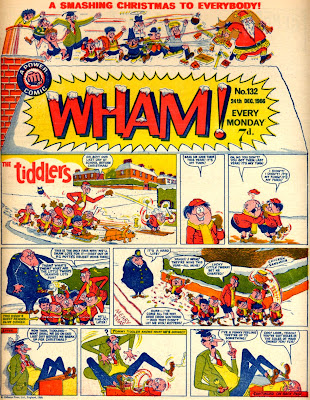 And just think what we had to look forward to at that time of the year;
Hallowe'en, Guy Fawkes' Night, Christmas - and I had the added
bonus of having my birthday fall at around the same time.  No wonder
I tend to look back on those events with such fondness - I was just the
right age to appreciate them in all their spectacular, multi-coloured,
atmospheric glory.  I'm sure it's the same for most people. 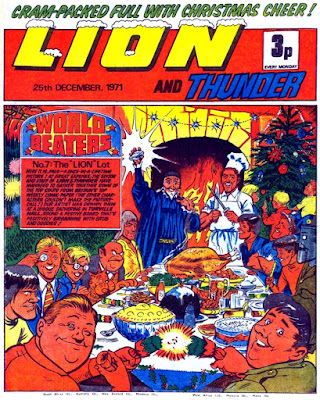 So, in an unseemly fit of sentimentality and nostalgia, I've dug
through my files and unearthed some comic covers which would've
been on sale towards the end of the year back in the 1960s & 1970s,
in an attempt to crystalize not only my happy recollections of days
gone by, but - if you're around the same age as myself - perhaps
also your own.  Hope you enjoy them. 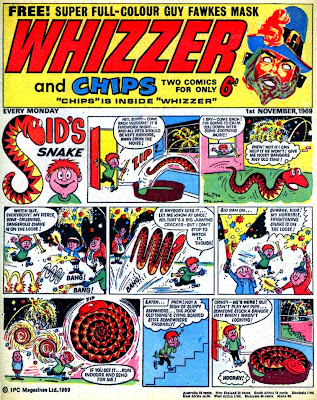 I was particularly pleased to see Whizzer and Chips and Lion and Thunder. Wham was a rarity for me, like Terrific. I seemed to read more copies of Fantastic, Smash and Pow (and TV Tornado).
I also sneaked a peek in class at JLA or Avengers or X-Men in my Adidas bag between 76-78.

I was never trendy enough to have an Adidas bag - only the old-fashioned leather schoolbag for me. (Which I still have and use from time to time.)