DAYS OF CHILLS AND TEARS... 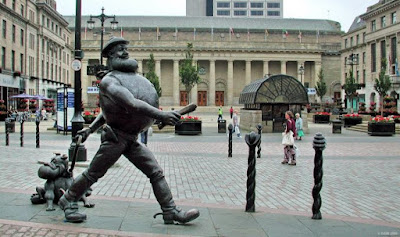 Hard as it is to believe, a certain blogger on another site continues his
defence of The DANDY's ill-fated new look (launched back in 2010),
while at the same time throwing up a smokescreen to deflect criticism
from those who are keen to deny any involvement in its failure.  Here
is the essence of his argument, boiled down to its barest bones.

Comics once sold in the vast numbers they did because they were
the only real form of cheap entertainment for kids.  Yes, we know.
Nobody has ever disputed it.

With changing social habits, and a wider range of available options
on which children can spend their pocketmoney, sales have been on
a steady downward spiral since the '50s and '60s.  Yes we know.
Nobody has ever disputed it.

There's a lot more, but that's the READERS' DIGEST version.  In
short, the picture he's trying to paint is that these and other factors are
the main reasons why The Dandy has recently suffered a devastating
decline in circulation, not helped by the fact that they no longer
regularly give toys away as cover-mounted attractions.

﻿﻿Although paying lip service to the notion that
"content and art styles might play a part in a
comic's fate", his use of the word "might" reveals
he regards it as highly unlikely.  He then dismisses
the importance of such a possibility by claiming "but
it's by no means the main reason."  It seems a tad
dogmatic to suggest that, in the entire history of the
medium, no comics have ever expired solely on
the grounds that readers didn't like them.
The implication is clear;  The Dandy's failure
is mainly attributable to other factors and has
absolutely nothing to do with the content - nor
is it related to the 'unfounded, vicious criticism'
of some of the artists, who are all brilliant and
should be applauded for their valiant attempts
to restore the comic to its former glory.

The toys issue is more complex than it may at first appear.  As some-
one who has bought an odd issue of DOCTOR WHO ADVENTURES
for a wind-up DALEK, I can see how I've contributed to an increase in
sales that week.  However, as someone who has also steadfastly refused to
buy The BEANO and DANDY whenever they hike up the price to cover
some toy I don't want, I have far more often been deterred from making a
purchase than I've ever been seduced into one.  What's more (because I
don't want to have gaps in a run of comics), I no longer buy the regular-
priced, no toy issues that I most likely would purchase in normal
circumstances.  I doubt that I'm the only one.

I've read on other forums of people claiming their kids won't buy a
comic if they don't like the toy that week, so how can we ever know, with
absolute certainty, whether a toy has been an attraction or not?  It's seems
far too nebulous to make any definite claims in the case of The Dandy.
Especially as, even when The Beano offers no toys, it outsells its
sister publication by a wide margin.

Consider also this:  when The Dandy was relaunched as a less-
expensive, no toy, all-comics weekly (as opposed to a dearer, toy every
issue, magazine-type fortnightly publication), it's circulation at first
increased.  Those involved (including that afore-mentioned blogger)
hailed it a success, and sat back to bathe in the reflected glory.

So why did it fail to maintain its momentum?

Let's look at, what seems to me, the obvious reasons. 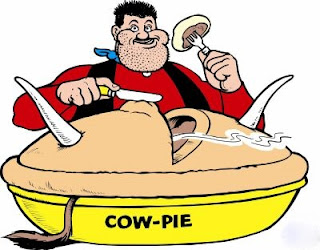 The Beano and Dandy
are both all-comics
content, both printed on
the same paper, and both
priced at £1.50.  Like with
like is fair comparison.
Although The Beano has
also suffered a drop in
sales over the years (as
has every publication), it
continues to sell around
five times more than
The Dandy.

So is it reasonable to ignore the likelihood that, in The Dandy's specific
case, content is not only an extremely important factor, but most likely the
primary one?  Even if 'gifts' do occasionally lead to increased sales, then that's
a bonus.  If a comic's content is right, it will surely maintain its r﻿eadership on
its own merits.  That's what the publishers of all comics and magazines
should be focusing on.
The aforesaid blogger reports that certain Dandy artists have been
subjected to 'vicious, bitter, vindictive, unfounded personal attacks'.
The worst I know of is "Such and such can't draw!" or "Wotsisname
draws like a 6-year old".  Personal?  Compare that to the remarks levelled
at myself for daring to comment on The Dandy's sad decline.  "Cancer's too
good for you." and "You've only ever f***** your mum."  The blogger failed
to condemn such comments, although I know for a fact that he read them.
And for him to dismiss all critics as "resentful failed comickers with an
axe to grind" or as "ever-vindictive people on the periphery of comics"
in a churlish, small-minded attempt to diminish their point of view
almost defies belief.

He seems to be suggesting that any small-press artists, illustrators
outside of comics, or those who do it merely as a pasttime - many of
whom have never even considered working in the field professionally -
are all worthless, non-entities whose opinions should  therefore be
dismissed.  A bit harsh - a bit elitist in fact.

The number of so-called 'professionals' (in all walks of life) who are
far from being the finest exponents of their craft is legion.  However, as
Lee James Turnock pointed out, although Jordan could well claim
to be a published author, it doesn't necessarily mean that her books
aren't sh*te.


Seems like sour grapes to me, arising from the fact that The Dandy's
failed relaunch has left those responsible with egg all over their faces.  In
the end, it doesn't even matter why it failed;  the fact is, it was trumpeted
as a bold, new move - and a success - by those whose judgement
has been demonstrated to be seriously lacking.

While his post may explain the overall general decline in just about
everything over the last 40-odd years (which no one, to my knowledge,
has ever disputed), it fails to address the pertinent reasons as to why
The Dandy in particular has suffered in so disproportionate a fashion
in such a short time in relation to other titles.  Remember, it's lost half
its audience in 9 or 10 months.

In short, it's nothing more than a thinly-disguised attempt to lay the
blame for The Dandy's decline on a much wider doorstep - and thus
absolve those directly responsible for its sad humiliation.
Posted by Kid at Tuesday, September 13, 2011

Also, I've just noticed that the bronze Dan statue in Dundee is based on the proper Dan - as it should be. The decision to revamp the character just makes a bollocks of history. It's like digitally remastering old episodes of the Goodies to get rid of the beards, flares and sideburns and make it more "modern".

In response to this post, a certain person makes the following comments:

"Wow, that didn't take long! I see a certain person has already posted a long rant about this post on his blog. Again, claiming I said falling sales have "nothing to do with the content" despite me clearly stating here that "Naturally content does play a part in the popularity of a comic" and "Obviously some kids and their parents will drop a comic completely if they dislike the strips".

Yet another example of this individual at his disingenuous best. Note how he completely distorts the facts, the better to demolish the straw man he has craftily erected.

While he indeed refers to the factors mentioned, he does so only in a general sense, and in such a way as to downplay their significance.

He conveniently ignores that he has discounted, on other sites, their relevance to The Dandy's particular case, and that it was to The Dandy I was specifically referring.

Out of interest, have you picked up/looked through this years Dandy annual?

Haven't seen it yet, but I'll doubtless buy it. I bought last years. Any good?