HARRY HILL AND THE HULK... 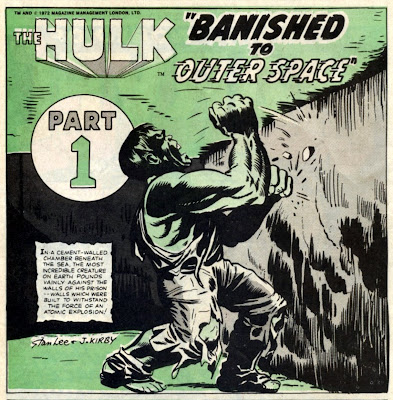 "And just what does Harry Hill have to do with
The Hulk?" I hear you asking.  Let me explain.

A while back, cartoonist NIGEL PARKINSON (artist on
DENNIS The MENACE in The BEANO and HARRY HILL
in The DANDY - as well as a host of other stuff) mentioned a
particular HULK drawing by JACK KIRBY which he had
first seen in a British comic called SMASH!

The illustration in question was the splash page from the
first story in #3 of the Hulk's own mag, reprinted in 1966 in
the famous POWER COMIC by ODHAMS PRESS.  I said
I'd post it on this blog in case Nigel no longer has that issue
of his favourite comic from childhood.

Trouble is, my Smash! collection is buried in a cupboard
which would take ages to dig through to see whether I have
an individual copy of that particular ish.  I do have the issue
in a bound volume, but I can't open it wide enough to scan
the page without damaging the spine.  What to do?

Lucky that my back copies of The MIGHTY WORLD
Of MARVEL are nearby.  So, above, from MWOM #5, is
the drawing that Nigel so fondly remembers from yesteryear,
when his career as a comic artist was still a few years ahead
of him.  And below, for good measure, is the colour
version of the full page. 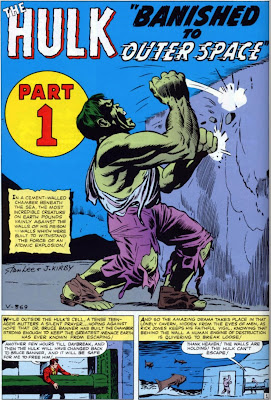