"AND THERE WERE GIANTS UPON THE EARTH IN THOSE DAYS..."

It was intended to be a single-series, revolving-door showcase for a
roster of MARVEL's mightiest heroes, but no sooner had the 1st ish hit
the stands than plans underwent revision.  GIANT-SIZE SUPER-STARS
#1 starred The FANTASTIC FOUR, with the second issue scheduled
to feature none other than your friendly neighbourhood SPIDER-MAN.
(PETER PARKER's amazing alter-ego would doubtless be first choice
to launch any new alternating series nowadays, but, back then, the Fab
Four were still accorded premier position in the Mighty Marvel
firmament of Super-Stars.) 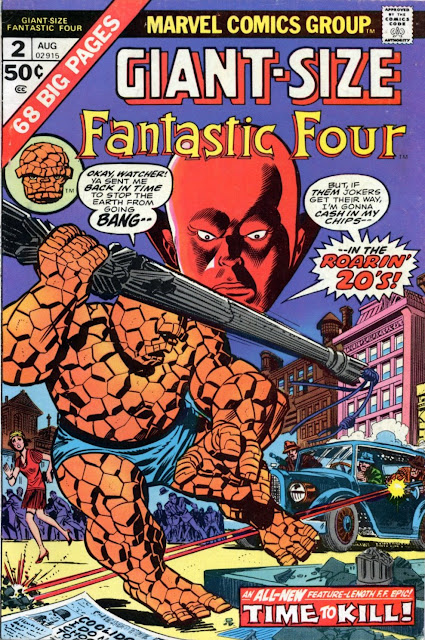 However, it soon became apparent to the 'powers-that-be' that, rather
than restrict the idea to one title, it would be potentially more profitable
to give each chosen group or hero their own giant-size mag.  And so, Spidey
was awarded his own 68 page comicbook series and what would've been the
2nd issue of Super-Stars evolved into GIANT-SIZE FANTASTIC FOUR
#2, followed by another four successive issues over the course of
the next fourteen months or so. 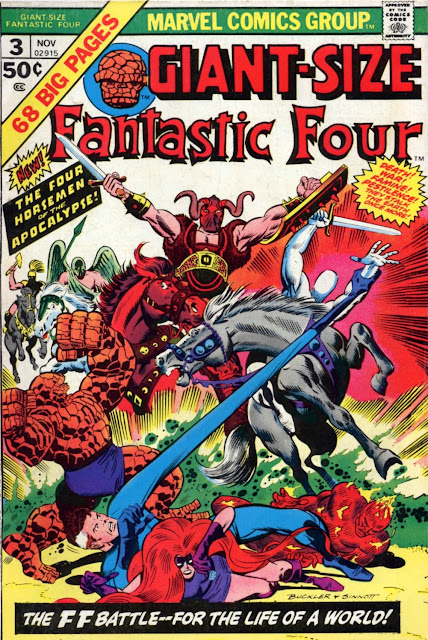 There were a number of different titles in the various Giant-Size quarterly
series on sale back in '74-'75.  GIANT-SIZE SPIDER-MAN, GIANT-SIZE
AVENGERS, GIANT-SIZE CONAN, GIANT-SIZE CAPTAIN MARVEL,
GIANT-SIZE DOCTOR STRANGE, GIANT-SIZE DRACULA, GIANT-
SIZE DEFENDERS and a host of others got the same treatment, proving
that when Marvel has an idea, they exploit it to the full.  However, it's the
good ol' FF that we're concerned with today. 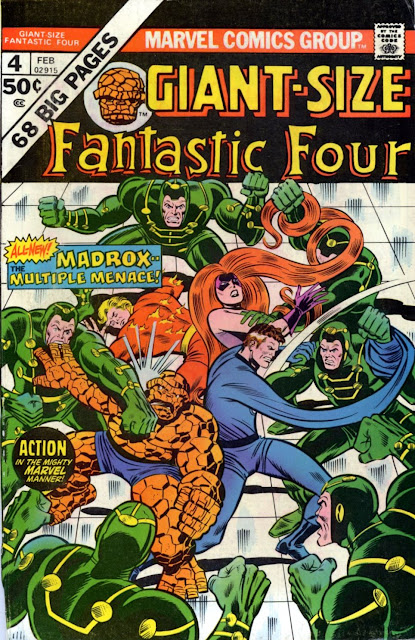 I didn't even know of the existence of these mags at the time they
first came out - it wasn't until 1979 or '80 that I obtained the 1st issue
when I ordered it unseen from a back issue dealer in Bournemouth.  And it
was a battered copy containing only the main story, the back-up features
having been 'surgically' removed from the comic.  It must have been some-
time around the mid-'90s perhaps, before I was able to obtain the full six
issue set and finally see the complete contents of issue #1.  (Only to find
that the missing pages were pin-ups reprinted from FF ANNUAL
#1, which had been in my collection for some time.) 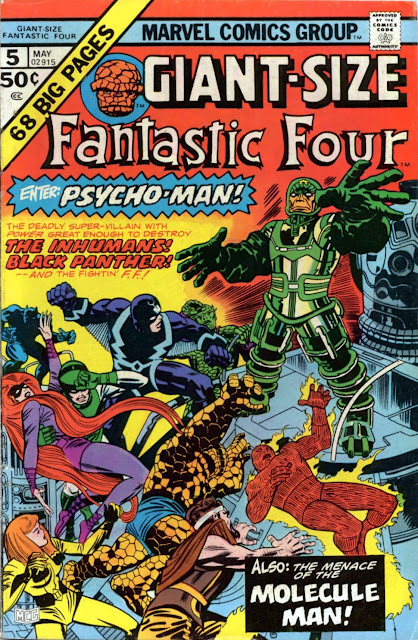 The main stories in the first four issues were all brand-new material,
with reprints from the early days of the FF as back-up content.  (Annual
#1, and regular issues #13, 21 & 28.)  The last two in the series reprinted
FF Annuals #5 & 6 as their main features, with #5 also including another
tale from the quartet's early days.  (Issue #15, and not the MOLECULE
MAN story from #20 as erroneously stated on the cover-blurb.) 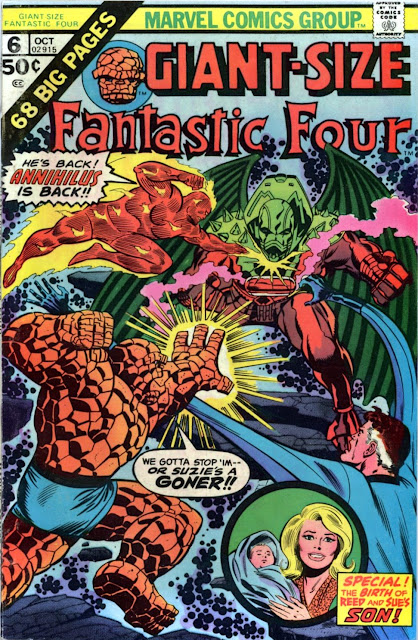 So, let's return to an earlier, more innocent time; the seemingly sun-
soaked, care-free days of the sizzling '70s, and enjoy all six scintillating
covers in their full, unadulterated, cataclysmic glory.
Posted by Kid at Friday, September 23, 2011