Above is the cover from the second THOR KING-SIZE SPECIAL
from 1966, below is a reprint from 1994 - which still carries the original
indicia, but with the words 'second printing' appended to it.  Sharp-eyed
readers will notice that ol' Goldilocks' right arm is different on the two
versions, the first having been amended before printing, the second
featuring the cover as KING KIRBY originally drew it. 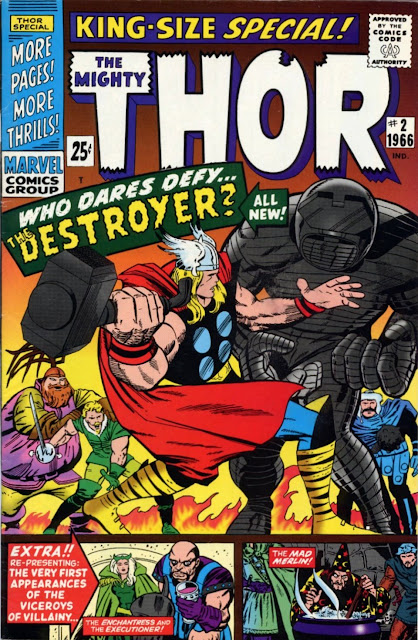 The reason for this is obvious:  Marvel's file copies of artwork
were usually photostatted before any alterations were made, hence
many reprints down through the years sported pages as they'd origi-
nally been drawn, not published.  Thankfully, in recent years, Marvel
has addressed this issue and striven to ensure that reprints are as
close to archival quality as possible.

But hold!  There's even more to the story!  Take a
good look at this third version of the cover, below. 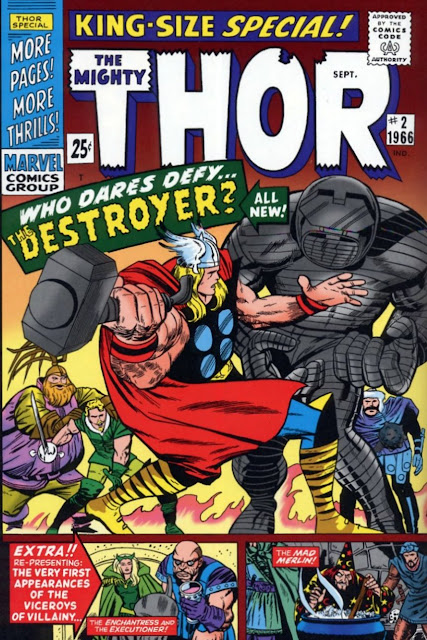 While thumbing through my hardbacked volume of THOR MASTER-
WORKS Vol 5 recently, I espied this amazing oversight.  Either the patch
covering Thor's original arm has fallen off (which would mean that Marvel
had access to the original art), or an art restorer re-created the new arm
on a file photostat, but then forgot to delete the original Kirby limb it was
intended to replace.  Who knows the truth behind this Marvel mystery?
Answers in the comments section if it happens to be you.
Posted by Kid at Monday, September 26, 2011